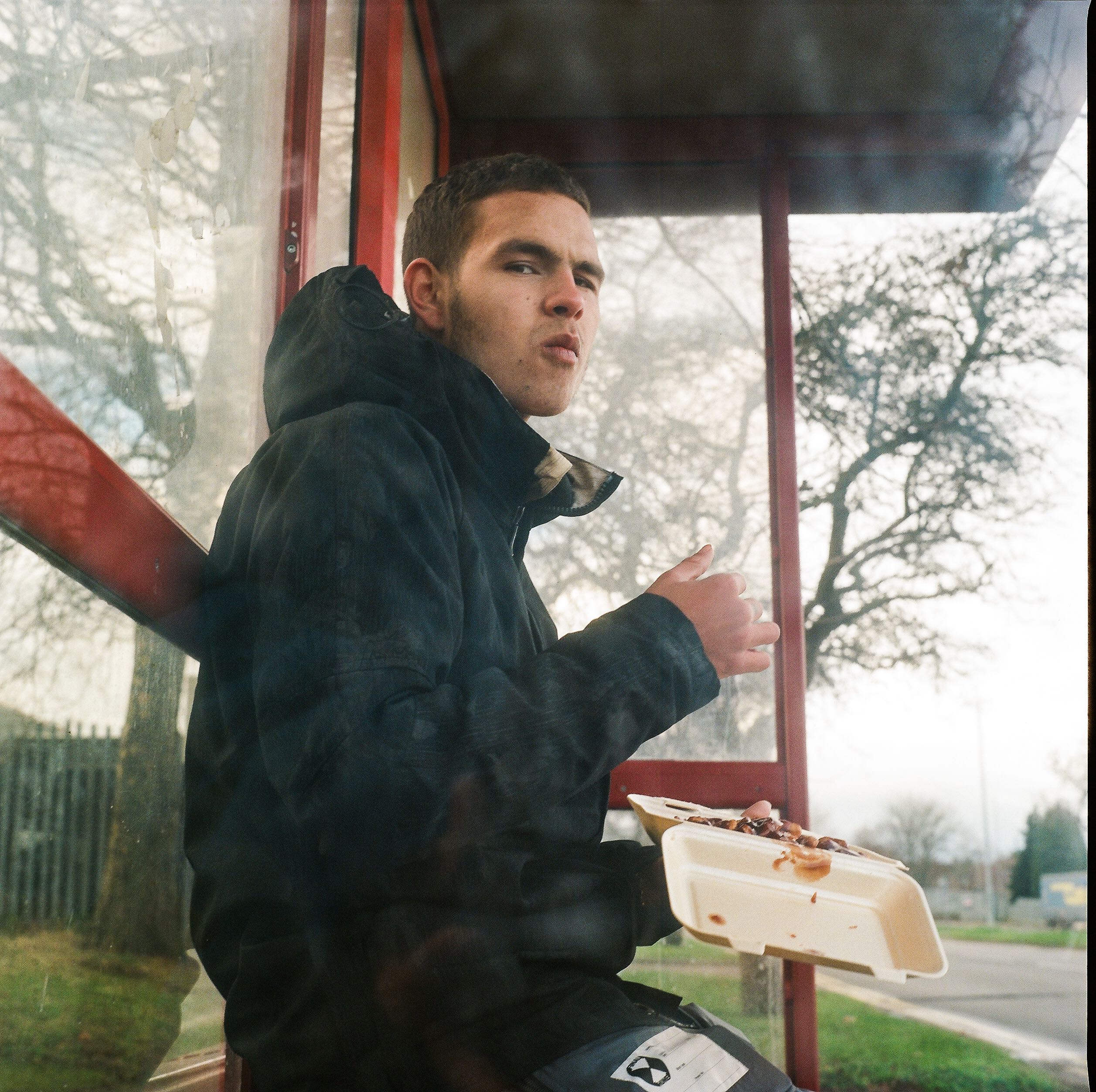 In March, Music editor Harry Hetherington sat down with Northampton’s Slowthai to discuss the Joker, genius.com, and Britain’s imperial hangover

Written by Harry Hetherington
Third-year student of English and History:)))
Published at 07:00 on 24 May 2019
Images by Pomona

How has it been touring Europe recently?

It’s just a different kind of crowd, they’ve been mad respectful; getting them charged up and getting them to mosh is a task in itself but at the same time it’s a blessing to see that the music’s travelled, it’s bigger than just Northampton, it’s nice to go somewhere and feel love. When you’re starting, when you’re on your own in your room or out on the road with your boys, you never believe, and even to this day I never believe anyone’s going to be there, even if they buy a ticket they’re just going to be be like ‘you know what, I can’t be bothered today’. And I never want to get used to that.

You’ve garnered plenty of praise from the music press in the last couple of years (placing fourth in the BBC’s Sound of 2019 poll). What’s been the most impactful one?

Those things are nice, but the most important thing is the people. When we went to South Africa, we met this boy who’d travelled from Johannesburg to Cape Town to watch the show, and over there it’s a real struggle, so for someone to have even made that effort was astonishing to me. He said the reason why he likes my music so much is because he knows he’s not alone. We’re all born to do something in life, I’ve always felt like there’s more I’ve got to do to change the way things are, and just to know that I’m doing the right thing- sometimes we get lost and clouded – ‘am I on the right path, what am I doing right’ – and then it was just that, that spoke to me a thousand words, more than any award or gratification from someone already in the music industry.

You and I and most of your listeners were born in the 90s, and this is reflected in the cultural references in your lyrics (BeyBlades, Crash Bandicoot, flying saucers). Is this a deliberate thing?

I don’t actively try to make it gimmicky in that way, that’s just what I grew up with, and for anyone born around the same time it’s the same – Gameboys, Pokémon, Beyblades – but also things that you’ll only really get if you’re from Britain. As much as that can close doors, it also brings people together, which we’re lacking with the disconnect of social media. We’ve lost that sense of community that made Britain great. There’s bare evil shit in the background, that most people haven’t actually read up on. They just see it all as a positive thing when really, we pillaged the world to try and make it ‘our own’, but that’s not us as people, that’s the higher powers, but people take that shit as gospel like ‘this is the way it should be’.

We constantly complain about shit and do a march, whereas the Buddha, and this may be fictional, but man went and sat under a tree for forty days without water and food, figuring shit out! But people want to act like because they’ve gone on one march and walked to parliament that we’re doing anything, or they’ve walked to Downing Street like ‘arghh you cunts!’- it’s kind of dumb if you ask me. We have to wait and watch it all play out- why don’t we come together, put it in normal terms that people can understand- because that’s all it really is, people using language to confuse people in everyday life.

Do you find that there is a demographic difference between performing at certain venues (Slowthai has performed at venues as far afield as New York’s Museum of Modern Art)?

It’s like anything, you have a preconception of shit, so you think ‘people aren’t gonna be do this’, but at the end of the day everyone wants to let loose, everyone likes a drink, everyone wants to have a laugh, so I think it’s all the same wherever I go. As long as I give everything, I don’t see why people wouldn’t reciprocate it; I think some people just a need a little nudge in the right direction, to let loose. So I wouldn’t say it makes any kind of difference, it’s more an industry thing, people saying ‘it’s gonna be like this or this’, but every show I go, I’ll make people come out of themselves, that’s what my goal is, stopping people from being docile. I just want to make so any time people feel fear, for them to shake it off, like ‘fuck that’. You could put me in like a shed and I’d make that shed turn up, make that shed large.

I’ve read that, growing up, you were aware of the Sidewinder events in Northampton (hosting important UK garage and grime events during the 2000s). Did you learn anything from those?

Not so much, because I was so young. It’s just like normal life, everyone’s on a wave, there’s always a party. When you’re that young you don’t look into anything that much- you’re always observant but I was never really like ‘yo, teach me how to do this’. I’ve always been a visual learner, but I never built it up to be like ‘these guys are gonna teach me’.

I heard Mike Skinner say recently that with lot of rappers from outside of London, they perhaps start off feeling different to London rappers because of a perceived ‘cool’ barrier, whereas he’s learned that there’s no inherent difference and that it’s mostly ‘just gas’. Do you think this holds people back?

If you actually look at it, say you’re from Manchester, if you get the whole of Manchester or Birmingham backing you, do you need London? Like say in Australia or New Zealand, they’re really clicking with this sound at the minute, and because of their accent I think they’re more drawn to the mandem that are outside of London that London itself, because they can relate to it more. Look at JayKae, my guy is one the top boys at the minute, and he’s been Brum all the time, he does his thing. Really, you’re just building it up in your mind, building that fear up – you don’t need the foundations that everyone in London has. As long as you have the people backing you, they’re the ones who are listening to you and buying your music.

How often are you in contact with (fellow Northampton native) Alan Moore? What are some favourite pieces of work that the other has produced?

For me, probably Batman: The Killing Joke, just because I’ve always been obsessed with the Joker, I’ve mad related to it because it’s a story of how he ended up the way he ended up. I’m not sure what his favourite thing of mine is, it’s not like I’ve sat there and traded notes with him. At the minute because it’s all been hectic, I’ve not really had a chance to sit down and speak with him, but after this next tour when I get a little minute I’m going to go and see him. And because I sort of look up to him, I’m not sure I really look up to anyone but he’s come from the same place as me, from an estate – and he’s also someone who doesn’t give a fuck about the establishment at all.

Dublin [on last year’s Slowthai Circus tour]. They were just rage, people were smashing glasses, someone got bottled but it wasn’t out of being malicious, someone just jumped in with a bottle in their hand and someone got hit on the head with it. I got my arm slashed as well – it just felt like it was all or nothing out there. My trousers got nicked, and then I had to walk to the Airbnb in my boxers and it was freezing.

Do you broadly identify with others in ‘UK rap’, or more with people you’ve recently worked with who sound more post-punk-inspired (Slaves, Mura Masa)?

I really just make music with the people I like, and I have to work off energy. I’ve been through so many stages in my life, connecting with different people – be it grebos, be it when people call it ‘chavs’, be it rock kids, punk kids, skaters, people who go fishing or do motocross … I’ve gone through so many phases in my life and friendship groups that I’ve never really found that I’ve belonged, and I don’t think you should belong. I’m just gonna make every kind of wild, stand-outish shit, just going to keep pushing, keep moving forward, and if I make noise music album or a punk album in two years’ time, that’s what I make. It’s the same thing where, if you start dressing differently, people are like ‘he’s gone all weird, he’s gone all fashion’ – it’s like, bruv, just try and grow as a human being, try everything.

Don’t be that guy lying in bed like ‘I wish I’d done more’. All the people at the top of the game creatively, they don’t want to keep doing that forever, that’s why when they’re on some next shit people are like ‘rah, that’s fucking shit’- but it’s not, they just didn’t take the time to show you that they’re not one-dimensional. Stop looking one-dimensional and look in a higher realm, look at the bigger picture. Stop looking at the oil on the spoon like the boy in The Alchemist.

What do you think of the effect of sites like genius.com? Do you enjoy your lyrics being analysed in such minute detail?

I don’t believe in writing on any of them sites because I feel like every element of art is open to interpretation – it may mean that to me, but if it speaks differently to you, you find your truth. To gain enlightenment and transcend spiritually you have to keep searching for knowledge, and if it tells you one thing that it tells nobody else then it’s your truth.

I hate having to explain anything, it is what it is. [For instance,] because I slur my speech, you may not know what the fuck I’m saying, you might make your own shit out of that, and that’s a beautiful thing, I want to know what you think it means, but I will never tell you. Imagine how unenjoyable life it would be if every time you wanted to know something, you go on YouTube and it gives you a step-by-step guide. Sometimes, it’s just better to keep digging down until you hit gold. I don’t mind the lyrics being written out, but I hate when people tell you what they mean. I hate them know-it-all cunts like, ‘this is how it is’. They’re the same people that, when the world’s ending and everyone’s at war, they’ll be on the side like, ‘this is gonna happen’- and it’s like [mockingly] ‘OK, alright, sick one bruv, you’re really good for the world’. Fuck ‘em.

Slowthai’s debut album Nothing Great About Britain is out now.