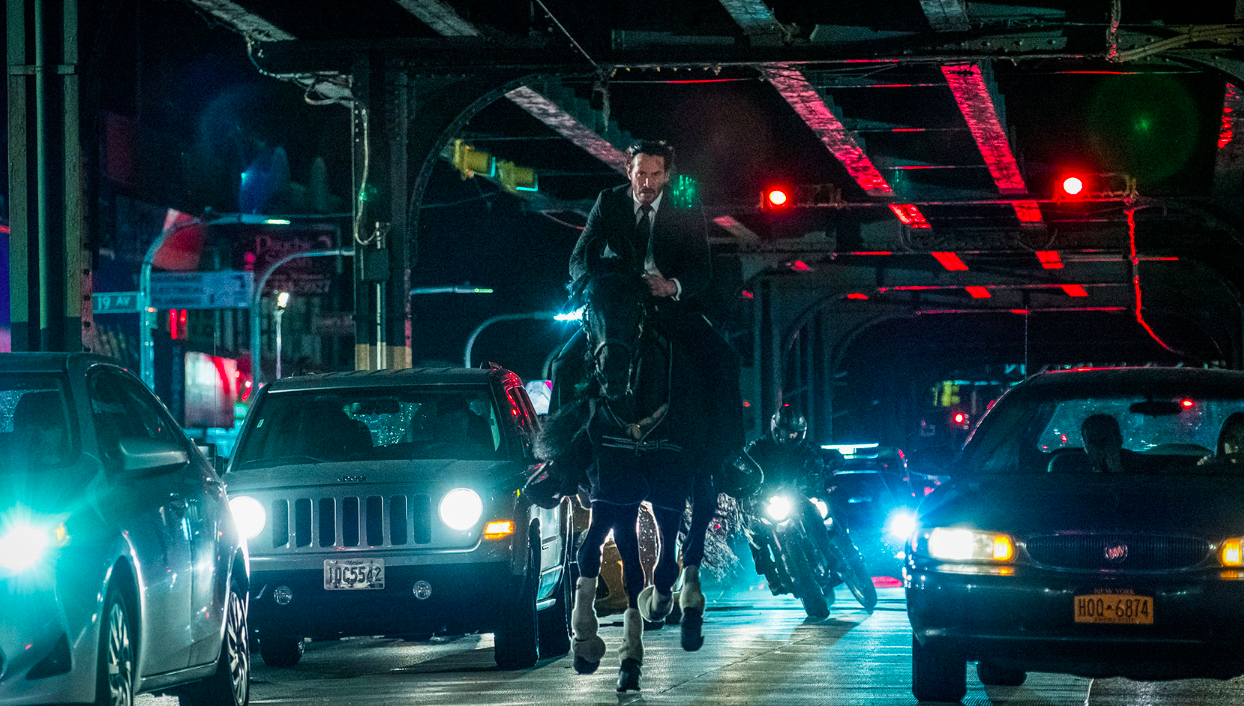 Matt Taylor
Third year English student and Film Editor with the capacity to geek
Published at 07:00 on 19 June 2019
Images by Lionsgate

Whoever thought that the guy with the bad British accent in Bram Stoker’s Dracula would end up being one of the great action heroes of the decade? Keanu Reeves has entirely reinvigorated his career with the John Wick series, showing off his abilities for both fantastic character work and near-unbelievable levels of practical stunt-work. The original film – about a retired hitman out for one last job after a mobster’s son steals his car and kills the dog left to him by his recently deceased wife – was the sleeper hit of 2014. A sequel hit cinemas in 2017, and both films featured some of the best examples of practical, in-camera, long-take action ever put to film. The latest instalment in the series, Chapter 3 – Parabellum, is no different, and only serves to continue Reeves’ superb upward momentum.

Parabellum means ‘prepare for war.’ Ironically, we are given no time to prepare. Things kick off immediately in the aftermath of Chapter 2, with John on the run after being excommunicado with a $14 million bounty on his head. It’s around 20 minutes or so before we get a breather, with the opening segment flying by in a jaw-dropping succession of action sequences, including one particularly impressive and wince-inducing sequence that sees John kill a man with a library book. It is scenes such as this that really let Parabellum shine; sequences of visceral, brutal action that are never less than gorgeous to behold. They are, somehow, the best we have ever seen from this series – ridiculously smart, endlessly creative, and made up of a gorgeous series of long takes, Parabellum’s action sequences stand in a league of their own. Highlights include improvements on the gun-fu of the first two films with horse-fu, dog-fu, and motorbike-fu, as well as an exceptional closing piece that plays some fantastic tricks with light and glass.

The work of all involved must be given extreme praise, not least the excellent performers (including side roles from the superb Yayan Ruhian, of The Raid fame, and Cecep Arif Rahman), stunt coordinator Scott Rogers, cinematographer Dan Laustsen, editor Evan Schiff, production designer Kevin Kavanaugh, and, of course, director and ex-stuntman Chad Stahelski. Everyone involved has given their all to the action scenes, and it shows. If we needed another reason to campaign for a stunts category at the Oscars after last year’s Mission: Impossible – Fallout, this is absolutely it.

It helps, of course, that Parabellum’s distinct fight choreography and visual style are grounded by some brilliant performances. Reeves shines yet again in the title role, as John is pushed further and further to the edge. His excommunication cuts him off from all Continental services, meaning he has to scramble to stay alive. We have seen pieces of his dark ‘baba yaga’ side before, but never to this extent. The journey John goes on is both wildly unexpected and hugely appealing. Ian McShane’s Winston thankfully gets more to do than in previous instalments, as he is under scrutiny by the High Table due to the way in which he carried out John’s excommunication. His paternal dynamic with John is tested throughout, as each of them must decide whether they value the other more than themselves. Mark Dacascos is a welcome newcomer as villain Zero, whose steely exterior is juxtaposed with surprising moments of levity. The character’s Japanese heritage brings with it a distinct flare in action sequences, while his less intense conversations with John are suitably entertaining. Lance Reddick returns as Charon, who, like Winston, is given more to do here.

Aside from this central four, the supporting cast is huge. It includes Halle Berry, Laurence Fishburne, Anjelica Huston, Said Taghmaoui, Jerome Flynn, Jason Mantzoukas, and Asia Kate Dillon. All are tremendous actors and all, apart from Dillon and Fishburne, are given extremely little to do. It’s such a shame: Berry’s character Sofia has been bigged up in the film’s trailers and is a great presence on-screen (as are the two dogs Sofia is fond of, leading to perhaps the film’s highlight action sequence), but she disappears virtually as soon as she pops up. The same goes for the rest of them; all the characters they play appear to be extremely important, but none are able to do much of consequence.

There is a reason for this: it is not down to the actors themselves, but to the film’s breakneck pace and sprawling plot. Neither of these are bad things, not at all, but because Parabellum never stops moving, it feels like things get forgotten. That’s not to say there are loose ends. In fact, we are always given the perfect amount of information we need to be able to understand what is happening, but characters appear and disappear with little consequence as a result of this momentum.

Parabellum is relentless and everything about it goes to serve John’s character, but the supporting characters do get left by the wayside a tad. Even more world-building is done here than in the previous two films put together, and the story’s scale is proof of this. As result of its massiveness, it loses some of the slickness and nuance that its predecessors did so well. Due to this fact, it does not quite reach the dizzying heights of the other two films, but make no mistake: Reeves and Stahelski have struck gold yet again with Parabellum, a sequel that does exactly what a sequel should, and then some. Brilliant stuff.

Verdict: Despite the issues it may have with plot and pacing, there is no denying that Parabellum is a brutal, relentless, engrossing, balletic bulletstorm of a film that demands to be seen on the biggest screen possible. Prepare for war, because the baba yaga is coming. And he is pissed.