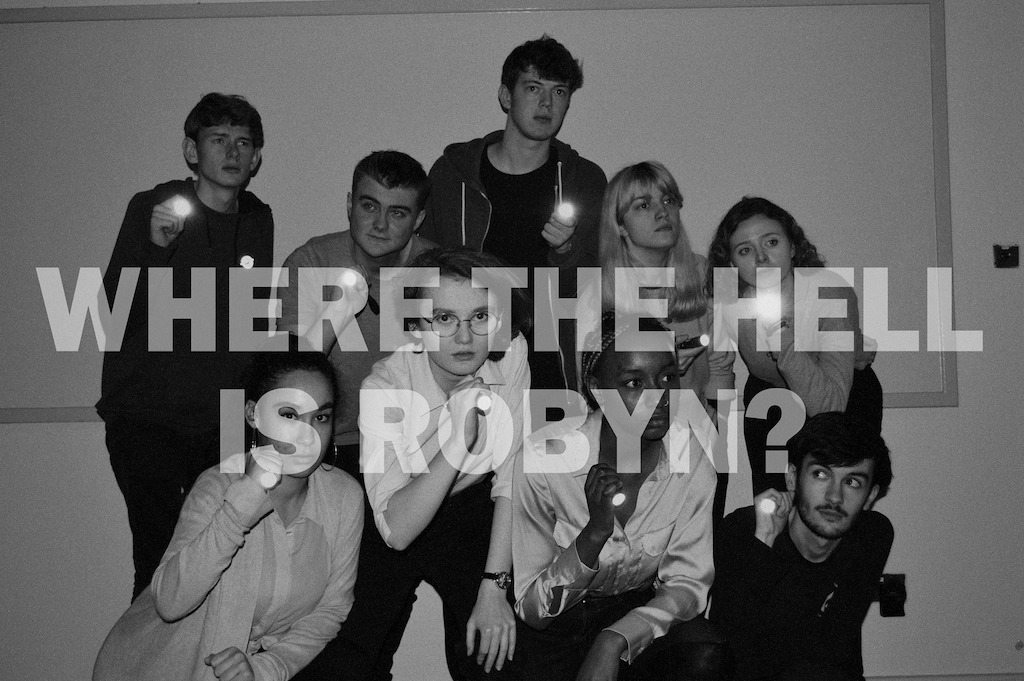 Review: Where the Hell is Robyn?

Culture Critic Mehar Anaokar reviews Tabletop Theatre’s latest production, leaving us excited to see what they come up with next

Written by Mehar.Anaokar
Published at 17:00 on 15 February 2020
Images by Tabletop Theatre

On the 8th and 9th of December, Tabletop Theatre’s ‘Where the Hell is Robyn’ was performed at the Midlands Arts Centre by a cast and crew of University of Birmingham students. Written and directed by second year English student Kim Garande, ‘Where the Hell is Robyn’ traces the sentiments of residents of Abbotts Holt following the disappearance of a young girl. As the police investigation continues, the play examines the slow unstitching of a close-knit yet diverse community, with speculations and neighbourhood gossip revealing as much about the accuser as they do of the accused.

With the drama being more a study of character than narration of a plot, the tension and power dynamic between the different roles presented to the audience is crisp and engaging. The most frequent clash occurs between Deputy Nadija (Memory Bhunu), a woman of colour who is also a part of the LGBTQ+ community, and Simon (Hamish Malcolm), the ‘almost step father’ of Robyn Miller. Bhunu and Malcolm present these differences perfectly, and their exchanges are both enjoyable and frustrating.

Simon is the kind of character you would love to hate, posing seemingly harmless questions such as ‘Where are you from, exactly?’ and ‘Who is the man in your relationship? You or Beth?’. It is difficult to not cringe at these questions as an audience, and Malcolm’s convincing portrayal of Simon’s confidence and ignorance adds credibility to his neighbours’ suspicions about his involvement in the disappearance.

Much of the suspense of play is heightened by these whispers and rumours that circulate within the community, from Simon outrightly accusing the incredibly entertaining and misunderstood Edward Bones (Matthew Magill) to discussions between the children at Robyn’s school. It is the overlapping presentations of these rumours on stage that propels the drama forward, creating a strong anticipation towards the final reveal. When the crime is unravelled and secrets are uncovered, every foreshadow and seemingly innocent clue falls into place, and both writer and cast are responsible for this outstanding delivery. The dialogue is fresh and engaging, and the dark tone is complimented well by the occasional comedy on stage. The character of ‘Bones’ is an unexpected wild card and adds the dimension of light-hearted humour in scenes where it is desperately needed.

It was an incredible experience to watch this play, and to see it produced, directed, and acted out by UoB students was nothing short of a treat. I look forward to seeing what else Tabletop Theatre will have to offer in the coming months.