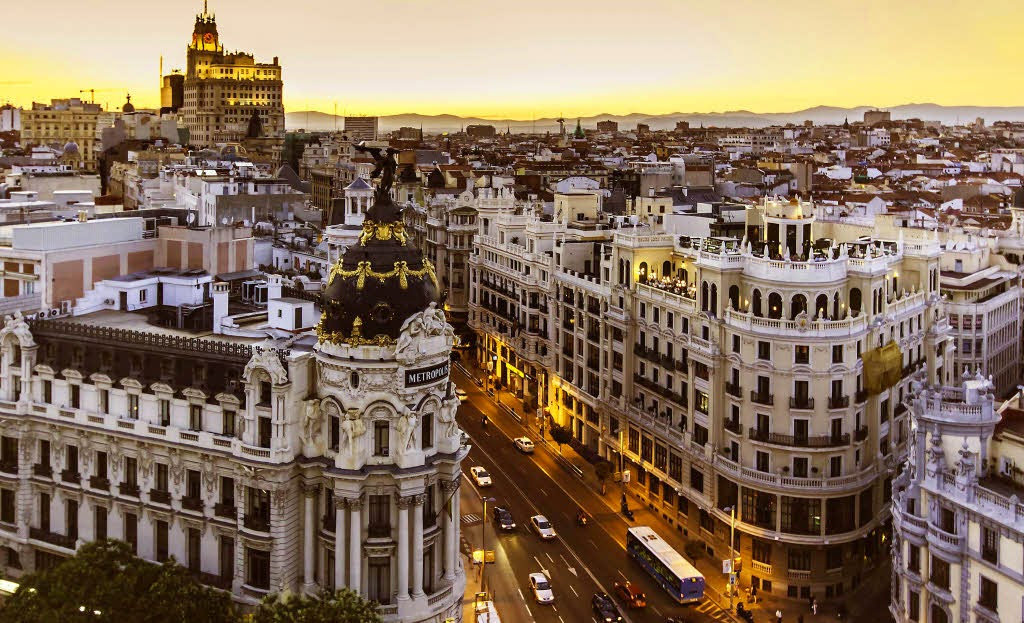 A Student’s Guide To: Madrid

The sun warms my back as I cross the Plaza de Lavapiés. While the square is filled, principally, with West Africans and Latin Americans, the scene nonetheless feels typically Spanish; young blokes lounge on the concrete street furniture encircling a melee of children, engaged in a furiously-paced game of football. Coming from a multi-racial, football-loving society, it is not so much the sight which intrigues me, but the sound, even the smell. The air is different, tangier, lighter and more still than London or Birmingham, thick only with the sound of chattering voices. The pace of their conversations is furious, words fired out like verbal bullets, as if in a hurry to reach the end of each sentence. Yet people merely saunter along the sun-drenched cobbles of Madrid, the speed of dialogue amusingly juxtaposed against the generally casual demeanour of the Madrileños.

Zigzagging through the crowds at a relative sprint, one aspect above all marks the difference between the Spanish capital and my own. While London’s diversity has come to define its culture, here, proud Spanish cultural traditions of food, music, and social life stand shoulder to shoulder with urban cosmopolitanism. Although similar in many ways, student life in Madrid certainly feels a long way from home.

As perhaps demonstrated by that conspicuously middle-class introduction, I must first acknowledge the enormous privilege which has allowed me to come here, snatching the last bit of free money from the EU’s wonderful Erasmus programme as HMS Great Britain slowly sinks beneath the unforgiving waters of globalisation. However inevitable to some extent, I promise that I don’t intend for this to be a self-indulgent litany of my ‘gap-yah’ interactions with European culture, but at least an unnecessarily verbose guide for people considering studying in Spain. I have divided up some of, what I consider to be, the key components of university life, comparing them to those of the mighty Birmingham.

Like any big city, Madrid boasts a wide range of venues with varying size, music, and, of course, quality. From tiny, one-room dance bars in amongst the flats of residential tower blocks, to the more familiar warehouse raves, I’ve found myself in a variety of strange locations. By far the strangest so far has been Boite, an inner-city gay club pulsating with men in tight black t-shirts, exquisitely-dressed drag queens, and, of course, several gentlemen in complete gimp suits, all cheerily mingling with one another. The venue blasts a mix of synthetic house and sickly-sweet chart anthems that will get even the most cynical of us belting out a bit of Rihanna on the dance floor.

Being a capital city, the cost of drinks in most clubs is certainly enough to get the old heart going, but we’re still talking roughly half of what you would be paying in London for at least double the alcohol. Of course, in shops, tinnies truly won’t cost you much more than water but whatever savings you make are normally offset by eye-watering entry costs.

To find somewhere more original and escape the trap of commercial house and monotonous reggaeton requires a bit of local knowledge. Otherwise it can be too easy to get drawn in by the warm lights and overwhelming popularity of the city’s megaclubs like Kapital and Barceló. Madrid’s techno scene is also very impressive, with renowned DJs from across Europe and Latin America passing through Fabrik as well as its myriad underground venues. However, it wasn’t until mid-November that I finally sniffed out somewhere booming with the drum & bass beats I had craved to hear. At last I found what I had been tracking, like an urban Bear Grylls, the tantalising sounds carry me through the door of Sala Republik revealing a dance floor of about nine people… Spain’s jungle is far from massive.

I could honestly write a whole piece about the university alone, my experience has been that bizarre. Compared to Birmingham, the organisation is, at times, hilariously minimal. For example, the seemingly simple task of assigning classes to classrooms without clashes proved to be something of an insoluble conundrum at the start of the year. Entire classes walking around the faculty building searching for professors, like an odd game of hide and seek, was a regularity. As was the bewildered look on the faces of the poor staff in the admin office when I asked where my lesson had been moved to. The building itself bears a somewhat unsettling resemblance (both inside and out) to the prison from which Michael Schofield escaped all those years ago. Perhaps its most confusing aspect is the fact that the faculty’s exterior walls remain (relatively) clean while the interior seems to be one huge canvas for a generation of graffiti artists. The toilets and corridors boast an exhibition of protest ‘art’, spanning the political spectrum from ‘Anarchy will prevail’ to ‘Hitler did nothing wrong’ – a very confusing reflection of my fellow students.

As a person who finds it nearly impossible to avoid being late, I have benefited hugely from the relaxed nature of the Spanish timetable, in which ‘on time’ is merely a personal interpretation. Fifteen minutes late for class in my second week, I was slightly nervous until, out the corner of my eye, I glimpsed my lecturer miles behind me in the queue for the bus. The only intense part of the whole experience has been the classes themselves. If you think it’s hard to listen to a two-hour lecture on domestic agricultural policy, doing so in Spanish is a real brain-drainer let me tell you.

Madrid is different to most British cities in that there is an abundance of relatively affordable housing in and around the centre. This means I’ve been able to rent a room, essentially in what would be Madrid’s borough of Westminster (less than ten minutes from the Spanish Royal Palace) for the same price as my room in the equally exotic Selly Oak. Sure, the area is beautiful but above all it is incredibly convenient, dangerously so at times. Having a 24-hour McDonald’s within walking distance from your house is both a blessing and a curse: a blessing when stumbling home after a night out and a curse when finding chips under your pillow the following morning. Beyond the golden arches there is a world of opportunity within walking distance, and I’m not just talking about Burger King…

Tapas bars, bursting with the heady aromas of fish, garlic and fried batter, are the perfect location for a casual meal and a drink (which, just like Selly Oak, is acceptable at all hours of the day), accompanied by limitless bowls of miscellaneous nuts. However, as I initially said, the Spanish establishments must jostle for space (and customers) with those from around the world: Chinese, Indian, North African, and, above all, Latin American contenders. The enormous Latin American community in Madrid has left a considerable, and delicious, mark on the city’s food scene, dominated, of course, by Mexican, but closely followed by Colombian, and Venezuelan. There is a mixture of chains like Arepa Olé, mostly serving variations of tortilla with beautifully seasoned meat and frijole beans, and smaller independently-run restaurants boasting their own home-made recipes. If you’re in the market for flavour and, dare I say it, hospitality, the Latin Americans have got you covered, even more so than their Spanish counterparts.

While it’s never easy adapting to a new city, culture or language, I have grown to love this city and its people. Over the past two years, Birmingham has come to be my second home and Madrid is rapidly becoming my third.