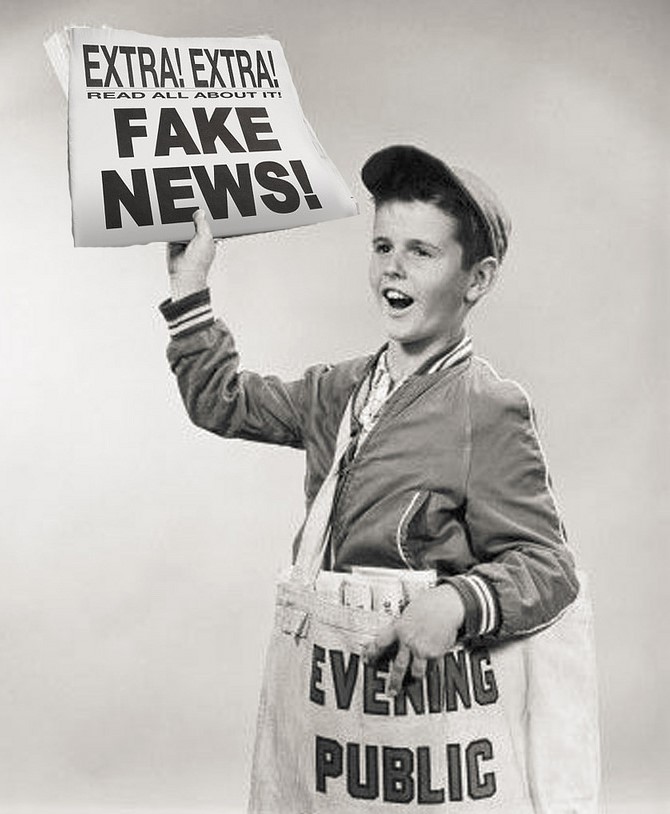 The End of Fake News

Written by Harry Thompson
Final year IR and politics
Published at 07:00 on 30 January 2019
Images by The People Speak!

Two men living separate lives are just starting their days. The first, Donald Trump, is the President of the United States and he’s had this position since the 20th January 2017. The second is Christopher Blaire, who lives in Maine on the East coast of the United States. In November 2018 he was heralded by the BBC as the ‘Godfather of fake news.’

The former has been at the forefront of a new global awareness regarding the phenomena of ‘fake news.’ Rightly or wrongly he has proliferated the use of the ‘fake news’ under-cutter into mainstream politics. With a knowing nod to his own ingenuity Trump announced in November that one third of Americans no longer trusted the media, and maybe he was right, but for what reason?

He has used the title of ‘fake news’ much in the same way medieval clergymen used the term ‘witch.’ Both are belittling tools for discrediting and ostracising and leave the accused with a considerable task to regain credibility if the label gains traction. The capacity to dub an individual or a group of individuals as witches is a dangerous position to be in and although fortunately the New York Times and CNN have each managed to avoid trial by dunking, it is hard not to assume that long-term damage is being done.

However, much to Trump’s frustration, Mr Blaire and his associates may be the real reason that exactly one third of the American population no longer trusts the media.

Mr Trump’s propagation of the previously largely unknown phrase has coincided not only with a greater media and public awareness of the need for fact-checking organisations (thanks to increasing efforts from businesses like Facebook at disseminating awareness), but it has also coincided with the prominence of fake news sources.

‘Fake news’ as a self contained phenomena began largely with the rise of mass consumed social media, but only since Trump’s presidency have children in playgrounds been branding each other ‘fake news’ as a source of insult and entertainment.

Titles such as The Onion have been writing and creating satirical articles for many years, however the notion of truly fake news represents a separate body of alternate truth dissemination. Writers like Mr Blaire are at the forefront of this, writing and spreading false articles about politicians, organisations or others based simply upon what mood they wake up in or what political motivations they may have.

There is money to be made here too. Advertising has led to a move away from satirical ‘fake news’ to ‘real fake news’ because the chances of sharing and subscription are far higher.

But awareness has grown; the recently repealed Malaysian law that made the dissemination of ‘fake news’ a crime worth of up to six years in prison show (however brutally) that it is an issue that is being taken seriously.

Log into your Facebook or Twitter and there is a good chance you will be met with a message informing you to be on the lookout for fake news. Organisations like Snopes and Full-fact are becoming household names, while articles from a trusted news source seem increasingly like an oasis in the desert when looking for information online.

This is where the light at the end of the fake tunnel lies. In a world where a nine year-old calls his friend ‘fake news’ for ignoring a hand-ball in the playground, where Cambridge Analytica decides key votes and where Trump finds himself in a authority battle with anyone who will listen, the need for real, authentic reporting has never been more vital.

As awareness of the handy-work of people like Mr Blaire becomes greater, and as people realise that a website with a convincing heading banner isn’t a replacement for credible and ethical journalism, there is hope that the the public will be driven back into the arms of real writing, real investigation and real reporting.

Journalism is facing its biggest challenge to date in the face of the internet, social media and a loss of advertising partners to search engines. However in all of this downturn, the rise of fake news may be just the thing the industry needs to pull the masses back into the safe and trusted arms of their favourite, real paper.