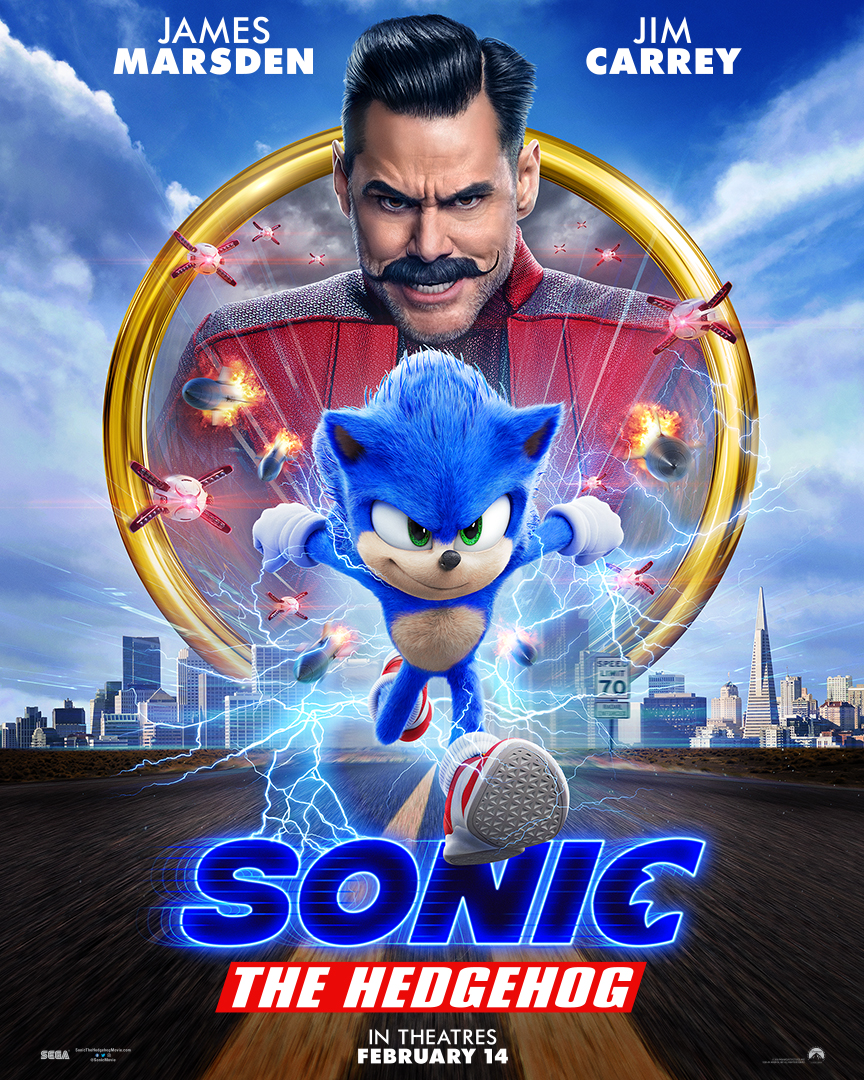 What does it say about the state of the entertainment industry when a whole character is redesigned due to fan backlash? Film Critic Antonio Aguila takes a closer look at the Sonic situation

As many people may know by now, the beloved fan-favourite video game character Sonic the Hedgehog is making his way to the big screen in a production that has already had some ups and downs. In the initial trailer fans were horrified to see a realistically and uncanny depiction of the super-fast blue hedgehog. With murky fur textures, realistic limb and head proportions, a non-cartoonish and athletic physique and, most upsetting of all, human teeth, this was more than enough to disturb the fans. Quickly, they took to social media to spread news of the furry atrocity. Although a majority of criticisms were aimed at the poor visual design, there were a small handful praising Jim Carrey’s performance. In fact, this performance as the zany, wacky Dr. Robotnik was regarded as the only redeeming aspect of the trailer, essentially carrying the entire Sonic project.

Contrary to what many were expecting, Paramount Pictures decided to do the fans a service by delaying the film and taking time with the iconic character’s redesign. Jeff Fowler, the director said on Twitter: ‘The message is loud and clear. You aren’t happy with the design and you want changes. It’s going to happen.’ The new trailer has now been dropped. His new makeover comprises of a bigger head, bigger eyes, shorter, skinnier limbs, more vibrant, shiny blue and skin colour fur. His whole being feels more cartoonish and appealing. As much as I would have gone to see previous animated Sonic anyway to enjoy it as a trashy cult film, I am genuinely excited to see this movie now: it actually looks good. Not only have they fixed the visual representation of the character, his personality comes across much better due to this. Before he was creepy and boring with painfully unfunny dialogue. Besides Jim Carrey, the film didn’t appear to have anything more to show than a character known for his running, running. Now he is a bundle of constantly moving hyperactive fun that just wants to go fast. In the new trailer we see him enjoying life by playing baseball, table tennis, nun-chucks, sightseeing, darts and dancing all escalating to some refashioned thrilling sprinting sequences doing his iconic run – but none of it comes across as cringey: it is actually quite enjoyable. From an unremarkable trailer relying on a spectacle that didn’t work to a new one visible with personality and fun, is it possible that the production team responsible for Sonic have redeemed themselves?

On the contrary, was it even genuine? Some fan theories have sparked the idea that this was just a marketing ploy to generate publicity. In the modern era, the involvement of social media in our lives has spiked and the term ‘marketing ploy’ doesn’t even come across as mischievous as perhaps it should do. If it is the case that the first Sonic trailer was a fake, it is essentially a corporation tugging at our nostalgic heartstrings to get us to hand over our money to them. On the other hand, this may have been a case of an individual resisting the political and market grasp of art, this individual being Jeff Fowler, the director. Although, was this for good reason? He has made award-winning short animations, which allowed him the chance to make his feature-length debut with this movie. He is not a long-lasting contender in the field of directing, so was this him genuinely trying to please the fans out of respect? Or was this him securing his position as to not ruin the beginnings of his career? Did the ease and accessibility for improvement made by his expert visual effects artist Tim Miller (who is responsible for Mass Effect, Avatar and Scott Pilgrim vs The World) push him to do it? Without his assistance would the changes have gone through? Next, how come the only highlight from the first trailer, Jim Carrey, was opposed to these changes? Speaking to Cinemablend in October 2019 he expressed his hatred when it comes to caving to fan pressure stating ‘I believe in auteurs, I believe in creatives. We do what we can do … You just become their Frankenstein monster at some point, right?’ This isn’t the only case when it comes to artists not being able to truly express themselves.

Social media now appears to hold a big stake within the entertainment industry and the type of content that makes it to the screen. Is this for better or for worse? What we have now is essentially a neoliberal relationship where individual artistic suppression is suppressed to meet market needs and demands informed by social media. We have gotten to the point where consumers have the agency to change art, however, that doesn’t change their status as the consumer. The entertainment industry has commodified expressions of the human soul. It is bizarre. Next to this is the increasingly polarising nature of Western politics. Whether it be left-wing, right-wing or even nothing to do with either, all it takes is just one blog post, one Twitter comment, one suggestion for something to be labelled offensive. And the term has lost its meaning since almost everything is offensive now. It is so commonplace that we coined and accepted ‘cancel culture as a phrase to describe this. Now, any idea or concept is completely erased no matter the size of the backlash so companies can continue to make a profit. My sympathies lie with the actual creatives in the industry, since on top of the already oppressing marketing,changing definitions are added onto the stack. What is deemed inappropriate is now quickly ever-changing and possibly to a radical point. Of course, there have been positive ramifications to fan backlash: for example, the Asian character in Hellboy that was originally meant to be whitewashed was eventually played by Daniel Dae Kim.

Then there is the more well-known and recent ordeal: Spider-Man, where the fans’ backlash didn’t matter all that much in the end. In the summer of 2019, it was announced that the fan-favourite comic book hero Spider-Man was to be removed from the MCU as a result of a dispute between Disney and Sony (Sony own the rights to the character, and ‘lend’ him to Disney for use in their Marvel Cinematic Universe). Whether you were on Disney’s side or Sony’s side didn’t matter: everyone was hurting. Fans were incredibly upset by this, but it wasn’t them who retrieved our friendly neighbourhood web-slinger. It was in fact actor Tom Holland who called Disney CEO Bob Iger and pleaded with him to make a deal, and it worked.

As optimistic as its ending was, should we have to depend on those with more than just a foot in the industry to change corporate minds? Furthermore, can we question certain mediums? Serialisation is something inherent in comic books, so how do we criticise this from commodity-turned products and can it or should it be changed? If not, then what happens? Art has too many definitions to be narrowed. The concept of art is something different also different to what is valuable. Martin Scorsese is correct in calling MCU films ‘theme parks,’ but he cannot argue against it rising as a massive cultural phenomenon and bringing millions of fans all over the world together. Oddly enough, this was a result of the mass-marketing and advertising that I was criticising in the first place. Has content delineated too far away from what critics deem ‘true art,’ and does it even matter? Is it okay to continue letting the market decide? In terms of implications, what does this mean for the future of cinema, TV, streaming, comics and possibly even books? Social media’s interaction with the public stream does add in benefits of user interactive content such as Black Mirror: Bandersnatch, more diverse castings and finding new digital avenues. However, as castings become more diverse the sincerity behind it lessens. As online streaming increases more independent content creators struggle more than they already do. Finally, as we shift more towards digital do we devalue traditional forms of art and close down more avenues than we open?

As nice as the specific Sonic case is now, on a broader context it is another reminder of the way real art can barely survive in this world. Is it worth going to see Sonic as escapist cinema that nostalgically plays with our childhood? Or do we not buy into the endless cycle? Or do we hope for the tiny chance that Sonic actually does us and our childhood-selves justice or even a step closer for cinema towards the better? What is the better? Should we even care, and if we decide to, would we?