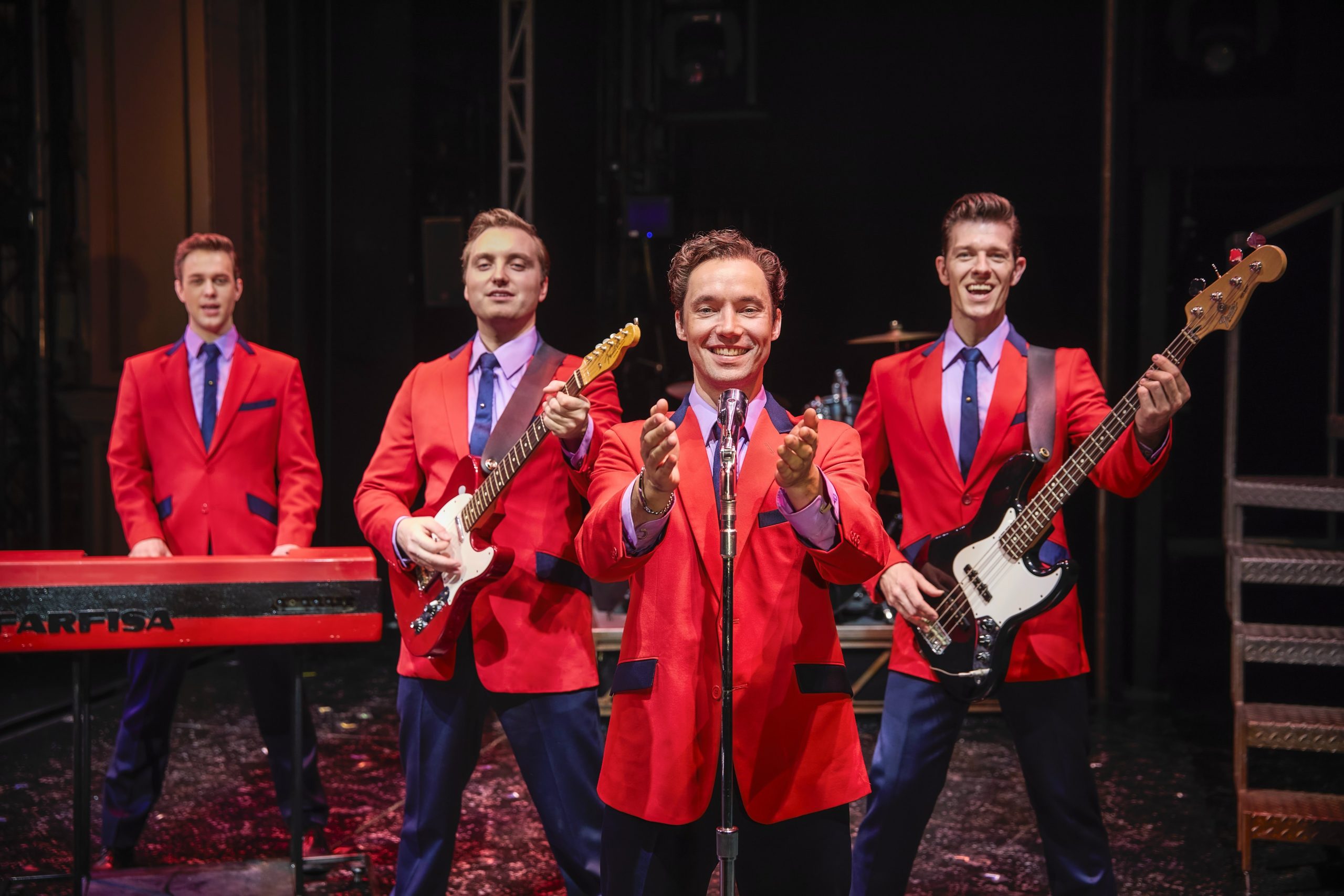 If I had to summarise the experience of Jersey Boys in one word it would be joyous. From almost the minute it began I had a huge grin on my face which lasted until the end of the musical. Although the majority of the audience was older, I was pleasantly surprised how many of the songs I recognised, with songs like ‘Beggin’ and ‘Can’t Take My Eyes Off Of You’ standing out. I would class Jersey Boys more as a kind of musical-play hybrid as the cast each narrate various parts of the story. The thick New Jersey accents and comedic storytelling added so much to the story, it truly felt like I had been transported back to the 1960s.

Indeed, this is where the show excels the most: the cast. The way in which the actors of The Four Seasons held the audience’s attention throughout the entirety of the show was exceptional; where most musicals have a significantly larger cast, Jersey Boys is reliant on its four main stars. I cannot imagine the pressure of performing in such an iconic biographical musical, so the way they recreated the so-easily-recognisable songs was fantastic. While the actor playing Frankie Valli changed during the interval due to unforeseen circumstances, both Michael Pickering and Luke Suri did the role justice. The bass tones of Nick Massi (Lewis Griffiths) perfectly complemented the harmonies of Bob Gaudio (Blair Gibson) and Tommy DeVito (Dalton Wood) throughout.

The main disappointment I felt with the show was the set design, something often lacking in musical tours due to the sheer impracticality of transporting large sets. However, Jersey Boys felt noticeably bare, often only featuring the drummer (who deserves a special mention for his sheer talent) and a basic table setup. This was combined with a slightly odd projector screen type set-up that displayed the names of the performance venues and random comic strip graphics. To me, this just felt a bit tacky and I would have much preferred a more intricate set instead.

Overall, I was blown away by Jersey Boys and was enthralled from start to finish. The performances from the entire cast were exceptional and at times I found I was literally laughing out loud which I find rare for a musical. While this might not seem like a musical targeted at younger generations, I still really enjoyed it and imagine it would make the perfect Christmas gift for family members who might perhaps already be more familiar with the music.

When we walked into The Alexandra, which is decked out in glorious Christmas lights and wreaths this season, the steward asked us to describe the theatre using three words, I replied: ‘fun, exciting and community-focused’. Little did I know, these words would come to perfectly describe my experience watching Jersey Boys.

Taking a whirlwind tour from the 1950s to early 2000s, Jersey Boys tells the emotion-filled story of the chart-topping group The Four Seasons. Jammed with hits that make you turn to your partner and declare ‘Oh! I didn’t realise they wrote that!”, this juke-box musical is a wild ride through the romances, finances and disagreements within the band. The story is filled with highs and lows, from mob debts and prison stays to tours and nights-out, yet the music is absolutely sensational, somehow fitting the mood perfectly without feeling abrupt or misplaced (a guilty criticism I usually have of juke-box musicals).

The cast were sensational. In a theatre that holds over 1,300 people, I felt like I was the only person in the audience. Beginning with Tommy, each band member took it, in turn, to deliver their story to the crowd, dancing in and out of the fourth wall. It felt very cinematic, reminding me of Ferris Beuller and The Wolf of Wall Street. The technique gave each character a chance to shine, whilst upping the pace of the performance. It felt more like a movie than a show in places, perfectly fitting the rise of technology, mass communication and popular culture shadowing The Four Season’s success.

We were fortunate enough to see both Michael Pickering and Luke Suri perform the role of Frankie Valli due to cast illness during the show. Both actors felt destined for the role; looking, sounding and acting the part of the infamous singer. I was distracted by the display of pop-art on a large screen at the back of the stage, the inclusion felt a little dated and not particularly in style with the rest of the show – think mobsters in suits in the foreground and primary colours and cartoon ladies in the background. Yet, the screens seamlessly displayed images and videos of the actual band at times, a feature that would delight all my fellow history buffs!

I was sceptical before seeing this musical, worried that I may not be the target audience and a little intimidated by the fact that we were a few decades younger than most audience members, but I cannot recommend it enough. With hits like ‘What a Night’ and ‘Big Girls Dont Cry’ to ‘Begging’ and ‘Can’t Take My Eyes Off Of You’, Frankie Valli and The Four Seasons have unknowingly been the soundtrack of my life. If you are looking for a fun-filled night out with your parents, grandparents or friends, then Jersey Boys is the one for you. Not to mention, it is worth a trip to The Alexandra this month to celebrate its 120th birthday. A cultural icon in Birmingham, a visit to The Alex is always one that involves fantastic staff, gorgeous surroundings and a whole lot of heart.