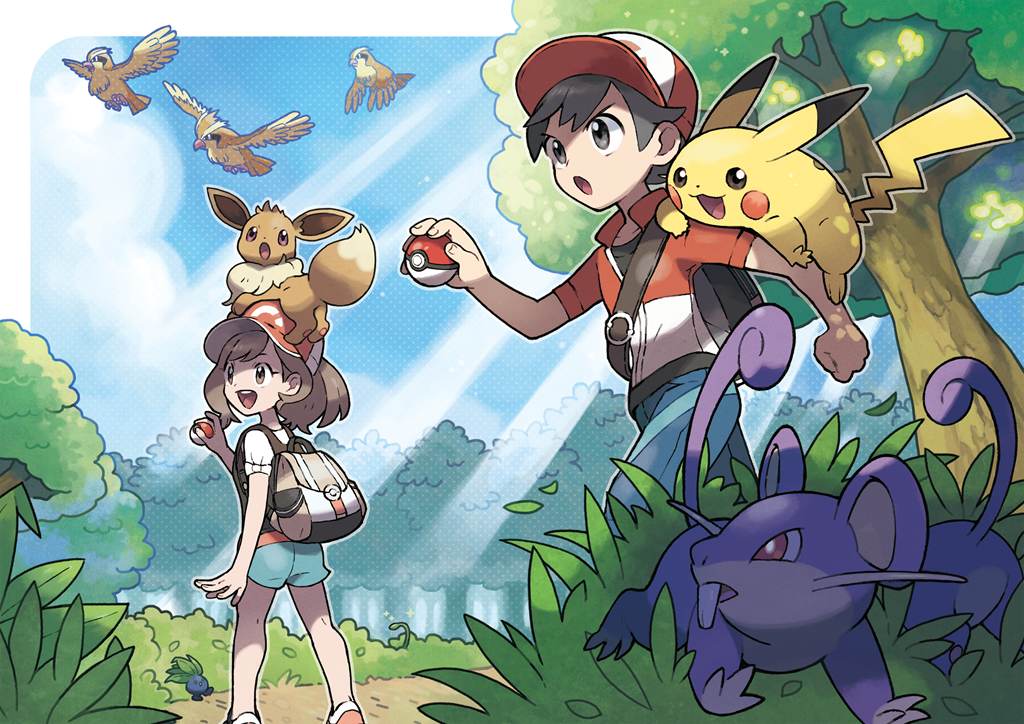 Gaming editor Sam Nason tackles Pokemon Let’s Go: Pikachu and Eevee, games that reignite that desire to be the very best, like no one ever was…

First teased in Nintendo’s 2017 E3 Direct presentation, Pokemon: Let’s Go Pikachu! and Pokemon: Let’s Go Eevee! hearkened the series’ jump to the Switch. The game released on November 16th 2018 to uproarious praise from critics, yet some fans felt alienated by the game’s simplicity, relative ease and disregard for many Pokemon post-Kanto, where the games take place. While these criticisms are not unwarranted, I believe Pokemon: Let’s Go Pikachu and Eevee are the most refreshing Pokemon experiences in years.

In many ways, Pokemon: Let’s Go Pikachu and Eevee are not only remakes of 1998’s Pokemon Yellow but a true reimagining of the title. Both offer a strong amount of content and truly reinvent the conventions of the Kanto region, making it accessible to both newcomers and veterans alike. The world is boundless, the Pokemon wonderfully articulate and the adventure unforgettable as ever.

Adopting the Pikachu version, I began my journey in the familiar Pallet Town. The first thing of note is the sprawling environments the extra power of the Switch helps to create. Towns and cities previously stuck in the realm of 2D have been entirely remade, bringing beautiful depth and vibrance to the region of Kanto. Settlements now feel more lively than ever and your adventure from one point to another is mediated by the wonderful atmosphere of the Pokemon universe. The scale of your surroundings makes your adventure that extra bit more grand, immersing you into the routes you’ll soon find yourself exploring.

Of importance in these routes is another drastic, yet highly welcome change – you can now see wild Pokemon wandering around the route themselves. No more does catching the right Pokemon rely on luck or tedium. Instead, by keeping a beady eye, one can run into whatever they want, whenever they can find it. Such a mechanic change was unprecedented before the release of the game, yet I cannot now imagine it not becoming a regular feature. It works wonders to refresh the activity upon the routes, giving players an insight into the Pokemon ecosystem itself. By catching multiple Pokemon, even rarer ones will begin to spawn, from a Bulbasaur in Viridian Forest to a Dragonite near the Seafoam Islands. Let’s Go is the breath of fresh air the franchise deserved for seeking out your favourite wild Pokemon.

Capture mechanics have also changed, adopting the Pokemon GO mobile system of acquiring your favourite creatures. Such a change is a point of criticism for many, yet I would argue in the context of the Let’s Go series, it is actually perfect. Due to its simplicity, never before have I been so motivated to ‘catch ‘em all’ – the series’ tagline which, in this game, is highly achievable. Encountering the Pokemon you want, and then figuring out the best way to catch them, is an undeniably easier and more streamlined process than the random encounters of past games. Throwing the Joy-Con as if it were a Pokeball fills me with a wave of nostalgia I can only describe as magnificent. While I’m undecided whether the Pokemon GO catching mechanics should be present in the next mainline Pokemon game, Pokemon springing across the overworld absolutely should.

While new changes have certainly been made, it’s pleasant, too, to see how much of the game is familiar. The Kanto region is as vast as before, with a huge amount of areas to explore and conquer that veteran players will instantly recognise. Characters like Oak and Blue support the player through their journey, providing an homage to the original while setting itself apart. The narrative is brought to life by the expressive 3D graphics, breathing new life into the well-known story of Kanto. Journeying with Pikachu, too, is the cutest thing in the entire game. You can play with your partner, give them a new hairstyle and feed them berries, cementing the fact that Pikachu deserves to be loved and protected.

And thus my favourite thing about Let’s Go is brought into scope – its heart. Let’s Go is a Pokemon game in the most marvellous sense, setting you on a quest to capture as many creatures as you can and save the world from the nefarious Team Rocket with little Pikachu in tow. Simple in execution but massive in satisfaction, the games truly gave me a feeling of childishness in the best possible way, hunting far and wide for any missing Pokemon and training to become a Pokemon master!

The game opens up more once you’ve defeated your final set of opponents, the Elite Four – new Master Trainers appear, encouraging you to become the best with not only your core team, but all 153 Pokemon available in-game. New, rarer Pokemon also begin appearing in the wild, setting you off on a glorious trip once more to fill in the last pages of your Pokedex, while proving yourself as the best trainer in the region.

Yet it’s silly to think this is a perfect game. One of its largest flaws is its care for the player; in this case it’s too much. Before entering Gyms you’re asked to pass a requirement or test, usually giving you an immediate advantage against the gym leader. For rock-type Brock’s gym, for example, you are asked to bring a Pokemon super effective to all of his Pokemon. While the intention is clear – to cater towards first time players and enable them to learn without frustration – the option to turn these requirements off for people who have played the series before would have been much appreciated.

This extends towards the game’s relative ease. I didn’t find any of the battles in the game – not even the final one – remotely challenging. This may be due to a few factors; perhaps it’s because Pokemon now all automatically gain EXP, whether they were in the battle or not? Perhaps it’s because the Candies offered in-game can completely break a Pokemon by making them monstrously powerful? Or perhaps it’s because I’m a 19 year-old playing a game largely catered towards kids? Interestingly my little sister has been playing along with me with the Eevee version and has had a difficult time conquering the final boss of the game. It’s calming to know, then, that this isn’t a universal problem. Is the game easy? Yes. But was I having fun while playing it? Yes, all the while.

Criticism is often drawn towards the fact that, of the 809 Pokemon that current exist, only 153 are in the game. Such a small amount does, admittedly, detract from team diversity. When battling with friends often we’ve had at least one of the same Pokemon across both of our teams. This leads to a lack of variation throughout the game as one often sees the same tactics used again and again. The inclusion of Alolan form Pokemon and Mega Evolution does somewhat rectify this, yet being stuck with the original Kanto Pokemon – and only them – only reminds one how restrictive the original games were in comparison to where the series is now.

Cons aside, however, the game is still a charming journey that embodies everything I love about Pokemon. I was filled me with pleasure as I explored the region I thought I knew, but in a whole new way. The liveliness of the world, coupled with the familiar Pokemon mechanics people know and love, fuse together to create a wonderful celebration of the series’ first adventure. The Pokemon: Let’s Go games are utter delights that invite players young and old to remember what it’s like to be a Pokemon trainer again.