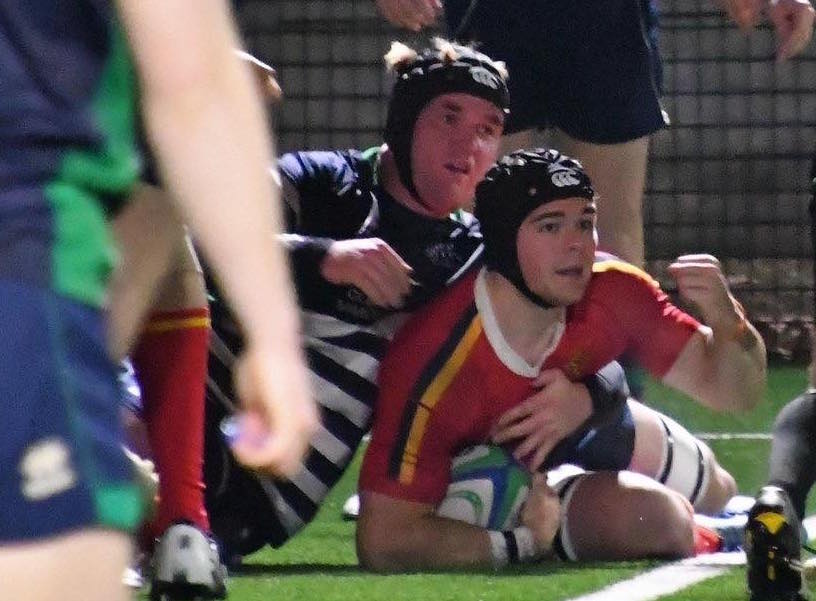 Written by Isabel Baldwin
Published at 07:00 on 13 February 2019
Images by Mick Lort

Wednesday night saw the Bournbrook pitch stage the rugby union mega-event, Engage, as a trio of spectacles took place under the floodlights. The University of Birmingham Women’s Rugby Union side suffered an unfortunate defeat to the University of Edinburgh, however the men managed to bring it back for Birmingham with the second team beating University of Nottingham in their quarter-final clash and the first team battling Bishop Burton to secure a 23-20 victory in the grand finale.

Birmingham’s first team were looking to maintain their unbeaten run following their 38-31 triumph over Loughborough. The main game got off to a rocky start for the home side when Bishop Burton took an early lead through a penalty. However, Birmingham were quick to retaliate as an easy play set Paul Webb streaming through Burton’s backline and over to boost Brum into the lead.

The first half saw Bishop Burton with the majority of the ball forcing the home side into maintaining a tight defence, yet the Lions tried to keep up their momentum as they attempted to power through to another try. However, their attempts were to no avail as a series of stumbling and fumbling yards in front of the try line prevented them from securing their second try of the night. Eventually, their efforts were rewarded with a penalty, bringing the score up to 10-3. To the disappointment of the home fans, Burton managed to close the gap slightly just before halftime with a try, yet no conversion.

Despite a mediocre first half, Birmingham managed to clinch a close 10-8 lead as they headed into the halftime break, setting the stage for what was to be a tight and thrilling second half. Yet, if coach Tom Drewett had words to say at halftime, they were nothing compared to the frustration he was radiating from the sidelines at the start of the second half. The Lions’ start was less than desirable with a performance that can only be described as sloppy and fatigued, as they switched off to allow Burton to score two easy successive tries. Burton dominant, Birmingham chaotic.

Retaliation soon came however, as substitute Tom Lort sparked the Birmingham boys to life with two tries, both pivotal boosts in Brum’s battle over Burton. With the score now 20-20, the crowd gathered around the Bournbrook pitch was filled with a nerve-wracking energy. The belief was back and the game was on. Victory came for Birmingham in the final, nail-biting minutes of the game in the form of a penalty kick. Following a sinking start to the second half, Lort’s successive tries eventually proved to be Birmingham’s saving grace as they rocketed the home side into the comeback that clinched the 23-20 win.

Whilst it was not their most emphatic win, Birmingham managed to light the Bournbrook pitch up to extend their winning run to five games and maintain their position in the table. The first team have two games left to play in the BUCS North A league and captain Connor Rogers states the team will be looking to maintain their triumphant form to ensure promotion to the ‘top league’ next season. In a post-match interview, Rogers said he hopes that, despite a less than ideal performance on Wednesday night, the team are prepared to take on Edinburgh away on the 13th February which he claims will be ‘a big game’ for the boys.