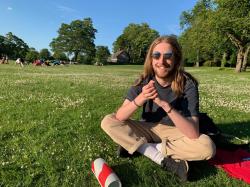 ‘I’m gonna sing some songs about some f**king miserable shit’, Jay McAllister, the singer-songwriter better known as Beans on Toast declared, knowingly, to the sold-out crowd at the Castle & Falcon.

This unlikely epigram was to capture perfectly the stark juxtaposition between the cold brutality pervading much of his content and the cheerful, optimism of his tone and demeanour. Armed with a robust back catalogue, vast touring experience and a prolific collection of tinnies; McAllister delivered a gritty, sincere set of moments from his latest record, The Inevitable Train Wreck, punctuated by some of his best-known tracks.

Beans on Toast’s strength lies primarily in his ability to condense complex and significant themes into accessible, relatable folk tunes. He dabbles in contemporary politics, although admits that many of his tracks are limited by their short ‘shelf-life’; when he does, tackling Brexit ambitiously early on in ‘England, I Love You’, he is impeccably understated and punk. Similar poise is present during the class war anthem of ‘Rich vs Poor’, and indeed in ‘The Ignorant Englishman’, one of a number of tracks that feel increasingly relevant as the country sleepwalks towards Armageddon.

You get the sense that McAllister really does want to build bridges between people, be that in the blisteringly sharp ‘Money for War’, a scathing parable of our fascination with violence and division, or even in the more inconsequential, everyman songs. His most popular to date, ‘M.D.M.Amazing’, is accompanied faithfully by the audience, and still feels serene, philosophical, at peace with itself and aware of its own ridiculousness.

As he closes the set proper with ‘On & On’, one final aphoristic anecdote, the room feels uplifted, nothing changed, external circumstances still bleak, difficult, but ready, now, to face them. The comfort of the pub gig has brought about a miniature revolution.