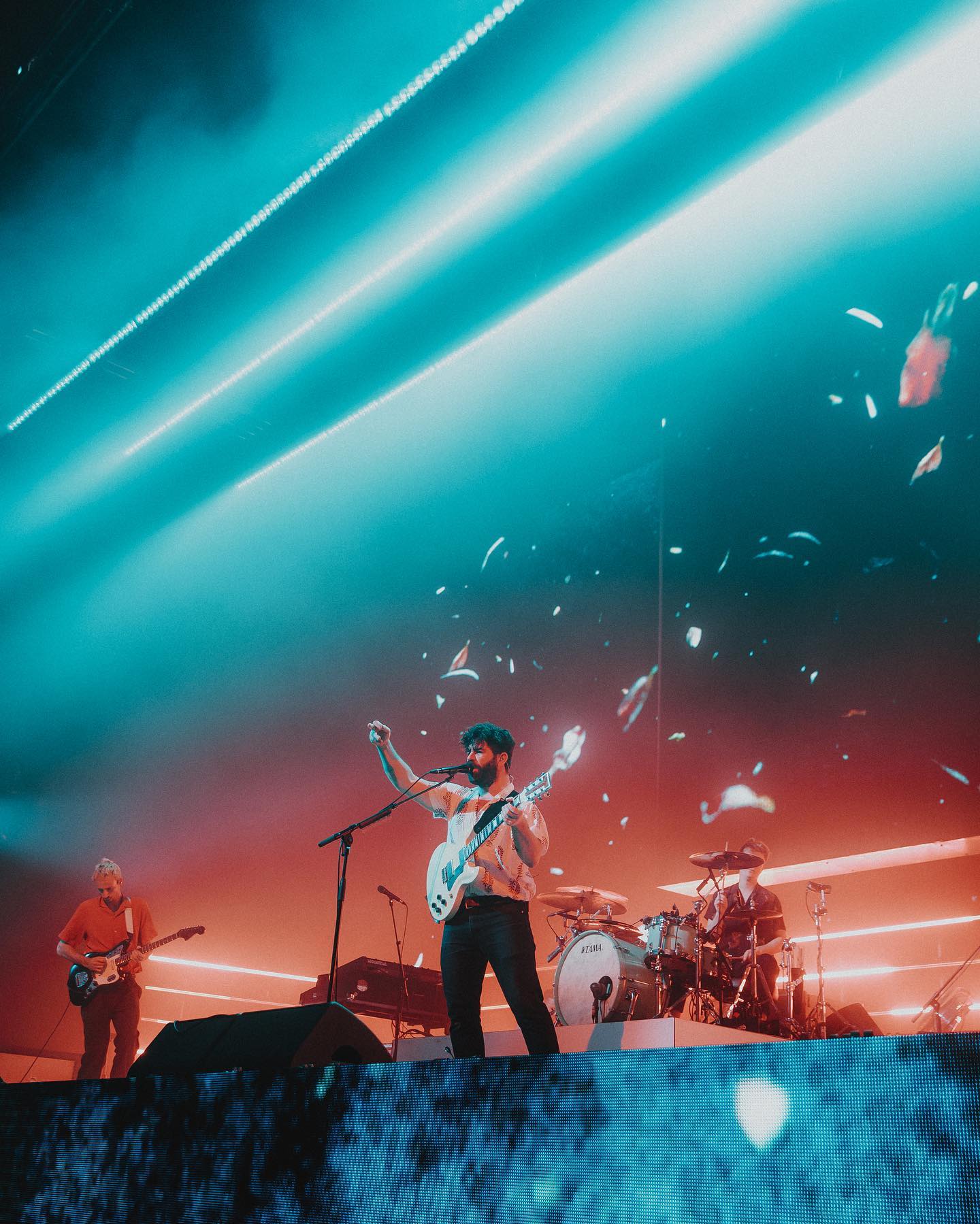 Foals put on a live show that was both experimental and exciting, Music Critic Bas Bevan reviews

Nearly two years after the date that was originally planned, Foals came to Birmingham to play at the Utilita Arena on the 23rd of April. The tour should have been in support of their fifth and sixth albums Everything Not Saved Will Be Lost Part 1 and Part 2 but equal focus was given to their new record Life Is Yours which comes out in June. With the band being known for their fantastic live performances and dynamic music the show promised to be amazing after such a long build-up.

The crowd were warmed up by Goat Girl who are in the middle of a string of big support slots having also opened for Sam Fender on his arena tour and will perform at Knebworth with Liam Gallagher in June. It was easy to understand why they are so highly praised with their colourful aesthetic and sound that is quite similar to Foals’ and the different combinations of singers and synth lines that made the songs almost hypnotic.

When Foals came on stage they started with ‘Wake Me Up,’ the lead single from their upcoming album which was inspired by the idea of escaping the world of the COVID-19 pandemic to somewhere much better. The track combines some of the main features of Foals music with a more funk-inspired sound, resulting in an upbeat party track that was a great burst of energy to kick off the show. From the first moment, you could feel everyone in the crowd’s appreciation for what they were witnessing.

The second song they played was ‘Mountain At My Gates’ from their 2015 album What Went Down. The track encompasses some of the main elements of the band’s sound: interlocking and exciting guitar parts, a stand-out chorus and a frantic ending. Being one of their biggest songs the crowd greatly enjoyed it.

The first song from Everything Not Saved Will Be Lost that they played was ‘The Runner’ which is on Part 2. It is a bit of a departure from Foals’ usual sound being a big rocky track but it still has their creativity and technicality running through it. Foals have become known for their boisterous shows over the years, especially in the early parts of their career, and this song was the first one where the crowd really started moshing while they sang the chorus ‘Oh, if I fall down/ Then I know to keep on running.’ The fact that they opened with three very different songs made the start of the show really exciting as it gave a glimpse of all of the different things that were going to happen.

The setlist really highlighted the variation in the band’s music from the more experimental songs on 2008’s Antidotes to the newer tracks like ‘Wake Me Up’ as well as the fans’ appreciation of them all. The next song they played was ‘Olympic Airways’ which is off their first album and is a bit more mellow than the first three. It was made especially good by the crowd chanting ‘Dis-a-ppe-ar’ with frontman Yannis Philippakis, who also was celebrating his birthday.

Next, they played ‘Looking High’ which is a brand new song. It is one of the poppiest tracks that Foals have released but the high-pitched guitar riffs and vocals made it really interesting. It fitted in well with the rest of the songs from Life Is Yours and it sounded like a perfect song for the summer.

One of the highlights of the show was ‘My Number’. Being one of the band’s biggest songs the crowd got excited from the first notes and energetically danced around singing the words. The intricate, overlapping guitar parts, the technical drums and the exciting chorus make it an archetypal Foals song. It was on songs like this where the adoration in the building for the band could really be felt.

‘2am’ was another new song that they played. Like the others, it is funkier and a further progression in the band’s sound whilst still having the elements that make it recognisably a Foals track. One of the best aspects of the show was the effects which seemed to be based on the upcoming album. There were vibrant, colourful images of flowers and other interesting patterns on the screens throughout all the songs. Along with the lights they illuminated the whole stage which alongside the music made the performance really captivating. Compared to the usual darkness of concerts the bright colours really contributed to the euphoric feeling of the show.

Another great song was ‘Birch Tree’ which was a single from What Went Down. The track has not been in the setlist much since the album was released but it had been put back in for this tour and was a testament to the quality that is present in Foals’ whole discography. It is one of their more artistic songs and has great examples of their poetic lyrics like the chorus ‘Come meet me by the river, see how time it flows’ that the crowd sang along with Yannis. ‘Late Night’ and ‘Spanish Sahara’ were two other songs that they played which are similarly ethereal and expressive.

The last five songs were some of the band’s craziest or as Yannis called them ‘wreckers,’ and they were clearly the ones some members of the crowd were most excited for. The first one was ‘Providence’ which is a song with few lyrics from Holy Fire. The second half of the song consists of one riff and thunderous drumming which they played for ages under yellow lights which matched the album cover while people erratically jumped around, only stopping for guitarist Jimmy Smith to play happy birthday for Yannis before they went straight back into it. ‘Inhaler’ from the same album which they played next was also highly energetic. It is a slower tempo song but the huge chorus was just as wild with the crowd forming a huge mosh pit as it built up.

The first song after the encore was ‘Black Bull’ from Everything Not Saved Will Be Lost Part 2 which, being very rocky with Yannis almost screaming the impassioned lyrics, carried on the energy from before. The last two songs ‘What Went Down’ and ‘Two Steps, Twice’ are two fan favourites that are the staple ending to all of Foals’ shows. ‘What Went Down’ starts with an ominous organ sound before building into a huge frenzy where they frantically moshed and screamed ‘When I see a man I see a liar!’ with Yannis. It was one of the most intense and exciting moments of the show and was made even more so by the red flashing lights.

‘Two Steps, Twice’ from their first album is one of the bands’ most unchained and erratic songs and used to feature Yannis jumping off the balcony into the crowd before they moved on to larger venues like the Birmingham arena. The first part of the song is like a lot of Foals’ early stuff as it is fast-paced and intricate before going into an edgy interlude which slowly builds up for ages teasing the audience. During this part, Yannis went down to the front high-fiving and getting in amongst the crowd before coming back on stage for the song’s big ending which is similar to parts of the other high-energy and heavier songs that they played before.

The performance that Foals put on made it easy to see why they are regarded as one of, if not the best live band in the UK and have several awards to show for this. The whole performance was fascinating and the mixture of the poppier and more funk-based songs from Life Is Yours, their more experimental and tranquil tracks, the heavier parts of their catalogue and the other types of songs that they played made it even more entertaining due to the intelligence and artistic quality that they all displayed. This combined with the stunning visuals and lights and the eager participation of the crowd made the atmosphere infectious and the fact that it was Yannis’ birthday made it even more special. Every aspect of the show was perfect which made it absolutely worth the two-year wait.