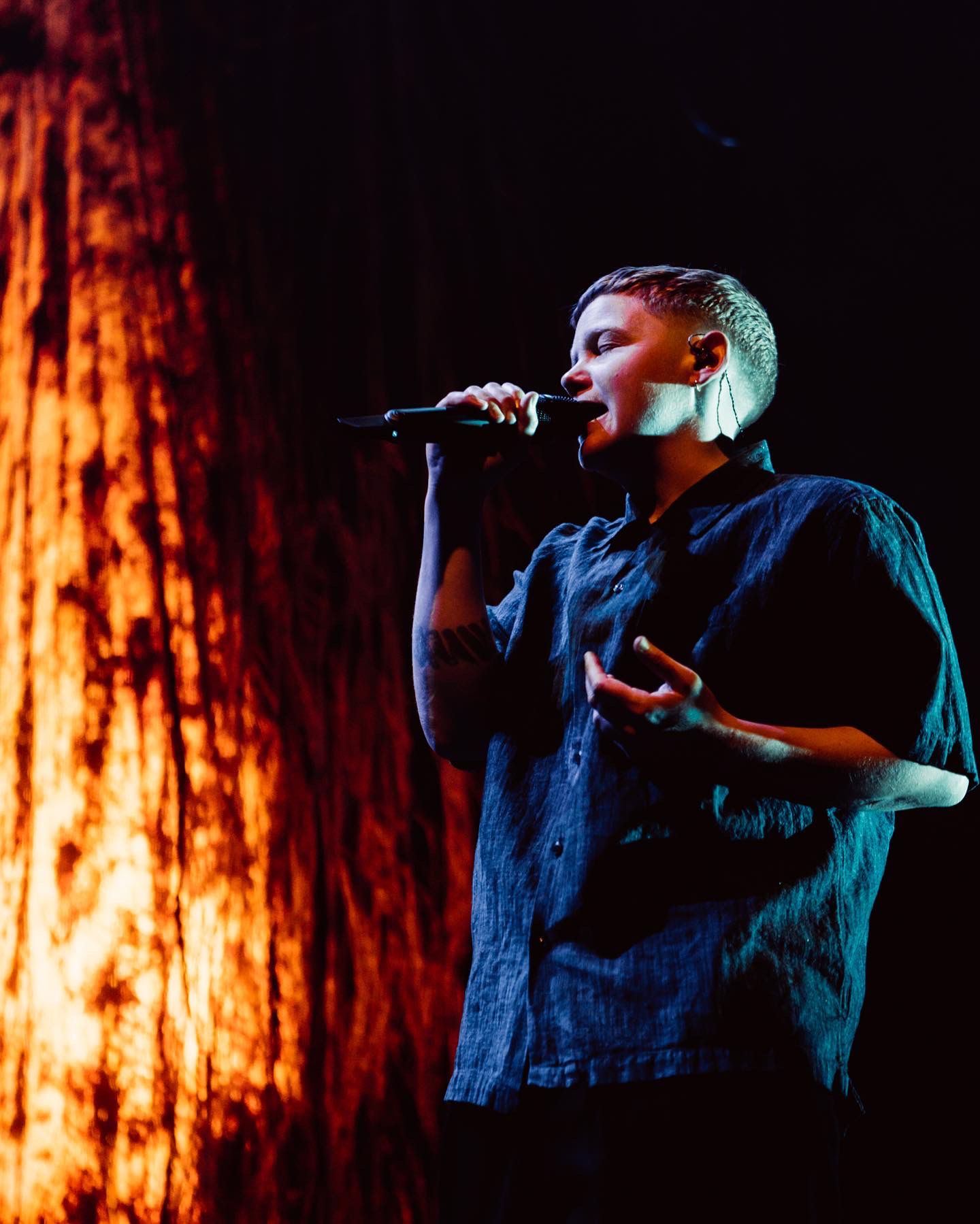 Music Critic Frankie Rhodes reviews Kae Tempest’s live set, finding it to be a testament to the power of spoken word in music

Written by Frankie Rhodes
MA Shakespeare Studies student - proponent of ethical fashion and lover of theatre.
Published at 19:00 on 24 May 2022
Images by @kaetempest on Facebook

Even within the majestic temple-like structure that is Birmingham Town Hall, Kae Tempest was the real star with their seamless spoken-word set. Birmingham offers many chances to enjoy poetry, from student open-mic nights to professional collectives, but witnessing a performer like Tempest breaks the boundaries of what live poetry can be.

Warming up the crowd, supporting artist Shungudzo received compliments from the crowd for her pink tiered dress before she even started singing. This set the tone for the uplifting feel of her set, combining inspiring political messages with innovative melodies. She managed to fill the stage with the aid of just a couple of laptops, creating space-age soundtracks that anticipated Tempest’s work. I particularly enjoyed ‘Best Days,’ a pop-feel hit that seemed to challenge toxic positivity while also celebrating life. Her acoustic track, ‘Ten Years Ago,’ brought a different edge to Shungudzo’s music, as an honest account of family legacy.

When Tempest took to the stage, their introduction continued the conversation started by Shungudzo, on how special it is to share a performance space together. They shared some poetry from a recent collection, hoping that their performance would bridge the gap ‘between emotion and experience, between audience and stage.’ Tempest explained that they don’t like talking in-between tracks, so will be performing their new album The Line is a Curve straight through, before playing some old hits at the end. This set our expectations for what would be a unique, immersive experience.

With its intricate plasterwork and classical columns, Birmingham Town Hall can feel slightly imposing, but Tempest made the place their own with a simple yet effective set. A ghostly tree-like structure stood in the centre of the stage, which was later illuminated in silver and gold at various moments. Kae Tempest was accompanied by Hinako Omori on keys, who expertly maintained the tempo all evening and added electrifying chords.

80s-style synth tones opened the set with ‘Priority Boredom,’ with steady, almost robotic lyrics preparing the audience for the musical journey ahead. The tone was confessional and defiant from the start: ‘to be known and loved / it’s so disgusting man, I’ve had enough.’ A dull tone marked a seamless transition into the next track, ‘I Saw Light,’ with a pulsing techno beat.

The first music sample was introduced with ‘No Prizes,’ as a falsetto chorus disclosed, ‘I just wanna keep climbing, and I don’t know why.’ This theme of reckless ambition was felt throughout the album, with Tempest adding that ‘now it’s like my best days have gone by.’ This drew an interesting, although perhaps not intentional, connection back to Shungudzo’s ‘Best Days’ track.

‘Salt Coast’ drew on seemingly mundane images like ‘leaves’ and ‘rain’ blended with acute observations. Clever juxtapositions were drawn, with ‘the Michelin star, the fast food, the straight lies, the strange truths.’ An atmospheric, Stranger Things style synth backing returned for this number, with blood-red lighting.

Later on, the tone changed to more of a lo-fi beat with the track ‘Smoking,’ where Kae Tempest discussed life memories. The set slowed down further for ‘Water in the Rain,’ accompanied by cool blue lighting and piano trills acting like raindrops. Tempest has argued that ‘the Line is a Curve is about letting go,’ and this complicated process came through in this number.

This meditation turned into a battle in the next track, with a retro techno beat accompanying the spoken chorus: ‘I’ll fight you till I win.’ Here, the lights became lightning flashes, creating an apocalyptic scene alongside the central tree. Following directly on from this, ‘More Pressure’ created the musical climax for this theme.

My favourite performance from the new album was ‘Grace,’ with a sparkling backdrop and acoustic guitar theme marking this romantic track. Honest, beautiful lyrics made this a raw piece, ending with the repeated riff: ‘in love, for love, with love.’ This marked the end of Tempest’s new album, finishing on a note of pure bliss.

Tempest then treated the audience to several previous hits, such as the canonical ‘Europe is Lost’ from their 2016 album, Let Them Eat Chaos. Now six years later, this loss is felt even more acutely, and the monotonous metallic beat combined with Tempest’s pleas: ‘what am I going to do to wake up?’ Their more recent track, ‘Holy Elixir’, was highly cinematic, but almost overwhelming in its techno crescendos towards the end.

Despite this, the seamless move into ‘People’s Faces’ was a welcome oasis. Somehow, Tempest managed to perform this poignant track with even more thoughtfulness and presence, looking out at the audience to deliver the concluding line, ‘I love people’s faces.’

While Kae Tempest admitted that they find encores ‘manipulative’, they remained on stage to perform one last piece, ‘Hold Your Own.’ This felt like a metaphorical cuddle at the end of a stimulating, mesmerising set. This evening was a testimony to the power of spoken word, but specifically Tempest’s expert command of language. The Line is a Curve adds to their impressive musical oeuvre as a more personal, yet enduringly political, take on the artist’s experience.