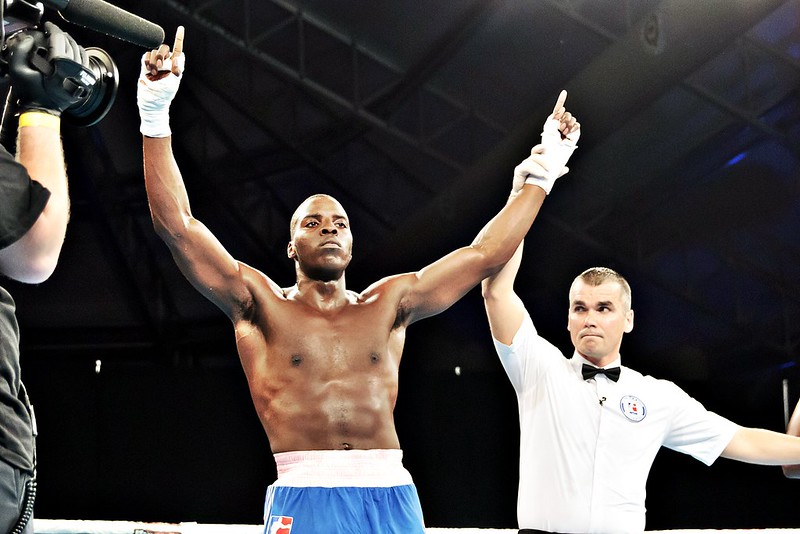 Will Rogers
Hi! I'm Will. I'm a second year history student at the University of Birmingham. My main hobbies are playing squash and snooker and I also enjoy reading about history, geography and sport.
Published at 15:00 on 31 March 2021
Images by Flickr/WorldSeriesBoxing

Less than five years ago, Britain had 13 world champions, more than any nation in the world. Yet, that number has now shrunk to just five, as Lawrence Okolie became Britain’s fifth boxing world champion last weekend. Okolie picked up the World Boxing Organisation Cruiserweight (200lbs) title with a dominant sixth round stoppage victory over the experienced Krzysztof Glowacki at Wembley Arena.

British boxing is currently being carried by its two heavyweight superstars, Tyson Fury and Anthony Joshua, who may meet in the summer for the undisputed heavyweight title. Other stars such as James DeGale and Anthony Crolla have retired, whilst Callum Smith and Josh Warrington suffered contrasting defeats, to the superstar Canelo Alvarez and to the unheralded Mexican Mauricio Lara respectively. Moreover, we have ignored many names, such as Liam Williams or Luke Campbell, who are fighting or have recently fought for titles, instead focusing on the next generation of British fighters. With the Olympic Games just around the corner, meaning a host of new amateur stars, we look at some of the professionals who will be hoping for world glory in 2021.

The young Edinburgh bantamweight is following in the footsteps of his friend and teammate, Josh Taylor, and looks on course to become Scotland’s next champion. Having changed his routine following a close victory over Kash Farooq, another name that could have been on this list, McGregor has notched up two impressive victories. Most recently, he became European champion with a first-round knockout of experienced champion, Karim Guerfi. Naoya Inoue is the phenomenal fighter in the division, yet John Riel Casimero and Nordine Oubaali represent beatable champions, especially with a ferocious Scottish atmosphere. At just 24, McGregor definitely has time to become a great champion.

Another talented, young Scotsman, ‘Braveheart’ has been faultless as a professional so far, but is facing by far his toughest test this weekend. He is fighting the experienced Lennox Clarke for the Commonwealth and British Super Middleweight title, knowing that a victory will provide a springboard to greater things in a stacked division. Hutchinson and McGregor, alongside the already unified champion Josh Taylor (who is fighting for the undisputed title on May 22nd), demonstrate the bright future of Scottish boxing, maintaining the legacy of greats such as Jim Watt and Ricky Burns.

Catterall has taken a different career path to many other fighters, turning professional at 19 and fighting on small hall shows, rising through the ranks to gain the recognition that he deserves. He has beaten contenders Ohara Davies, Tyrone McKenna and Joe Hughes, demonstrating that he has the talent to compete with the division’s elite. Timing will be crucial in determining his success, given that the 140lb division is not the deepest, he may be able to sneak in and win a title, should the winner of the Taylor vs Ramirez fight vacate and move up to the challenges of the welterweight division. Either way, Catterall represents an old-school success story that should be cherished amongst the commercial powers of modern boxing.

Conversely to Catterall, we have the 2016 Olympic bronze medallist Buatsi, a gentleman outside the ring but a beast inside it. Having already racked up impressive victories against experienced campaigners, Buatsi is definitely in a position to fight for a title, and poses a serious threat to the Russian trio at the forefront of the light heavyweight scene. He may need one more fight against one of the ‘gatekeepers’ of the division, such as Eleider Alvarez or Badou Jack, before he takes on the exceptional Dmitry Bivol or the frightening Artur Beterbiev. Out of all of the British talents, Buatsi represents the best shot of being a champion, and maybe becoming a legend.

Finally, Dennis McCann is the youngest and rawest of the fighters on this list. Although McCann will not be ready for the world title scene this year, he will definitely gain experience for his potentially long future in the sport. Fighting regularly on Frank Warren’s shows, including this weekend against the Mexican Luis Moreno, McCann is rising through the ranks and represents a different prospect to the others. However far his career eventually goes, fans can get excited about the talent that this kid has.

British boxing is in a good place at the moment, mainly due to the success of its heavyweight duo. Britain’s young heavyweights are also on the rise, ranging from the experience of Joe Joyce and Dillian Whyte to the youth and talent of David Adeleye and Daniel Dubois. Throughout the lighter divisions prospects are still emerging, hopefully emulating the talents that are heading towards the end of their careers and leaving legacies of their own. With the Tokyo Olympics just around the corner, British fight fans will have another batch of debutants ready to leave their mark on the professional game. How many can follow in Okolie’s footsteps? Only time will tell.

No Overseas Spectators at the Tokyo Olympics

Scholars to Compete for British Judo in Georgia