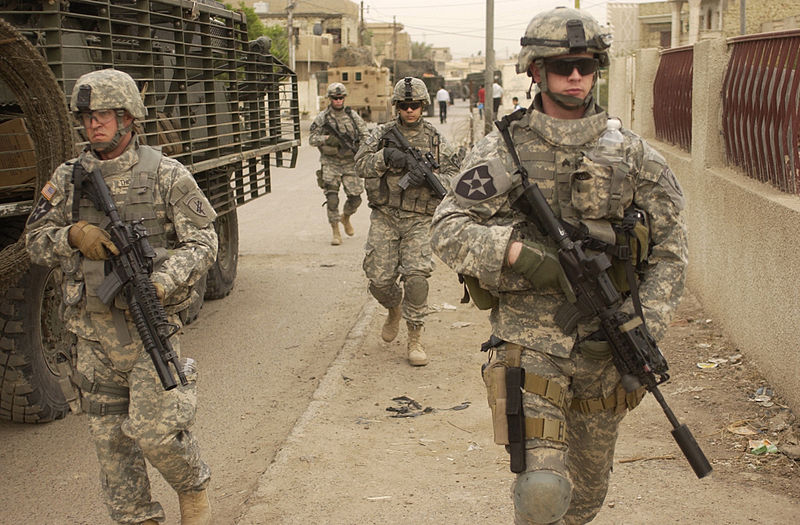 Protests in Iraq: The Failure of Western Intervention in the Middle East

Comment Writer Andrew Bailey claims that the US intervention in Iraq was unsuccessful, with its repercussions continuing to be felt today

Written by Andrew Bailey
Published at 11:15 on 24 November 2019
Images by Elisha Dawkins

On the 19th March 2003, the US army and its allies invaded Iraq, claiming that Iraq had weapons of mass destruction and was allowing the terrorists who carried out the 9/11 twin towers attack in New York to reside in Iraq. Occupying Iraq until 2011, the US deemed their operation in Iraq a success. However, 16 years later, it is clear that western intervention into Iraq hasn’t been a success, for Iraq itself, the US or for the stability in the region.

Since 1st October, Iraq has been engulfed with protests that have led to around 300 people dying and roughly 8000 people being injured, according to the UN. Repeating 2011 Arab spring slogans, the mainly youthful protestors in Iraq are calling for real political change, to eradicate corruption from the government and over the lack of employment opportunities, but as the protests have developed so have the protestors demands. Apathetic with the current political system, protestors are now asking for new electoral laws, the resignation of political leaders and for people to be held to account for the corruption they’re involved in. The Iraqi government’s response in Baghdad has also prompted more people to start protesting, with tear gas, stun grenades, sound bombs and even live bullets being used on the protestors, causing people to be even angrier at the government and causing more people to protest. Will these protests be resolved anytime soon? Unlikely, with the ruling elite not going to give up concessions easily, it is likely that the people will remain protesting until the government starts taking their demands seriously.

How does the United States and the rest of the western world fit into this? Quite easily. The invasion of Iraq in 2003 and the topple of Saddam Hussein’s government created political uncertainty in Iraq. Also, the US tried installing a system of government that works easily in the west. However, in westerner countries there aren’t religious tensions between people in the same state, which can be found in Iraq, and other Middle Eastern countries for that matter. With the many different groups in Iraq, a political system tailored to this would’ve been the best option for the United States to install, but instead they decided to try and install a western style of government in Iraq. This has proved unpopular with many Iraqi citizens feeling like the system is geared against them and favours the elite. According to NGO Transparency International, Iraq is the 12th most corrupt country in the world, showing the failures of their current system. A lot of the problems currently facing Iraq can be traced back to the US invasion, so why is the US invasion still deemed a success?

In terms of achieving an objective, Saddam Hussein’s removal from power achieved the main objective that the US and its allies wanted to, but this created more problems than it caused. A botched attempt at creating a political system, US involvement in Iraq until 2011, and creating anti-western sentiment in Iraq and neighbouring Middle Eastern countries that arguably led to the creation of ISIS. Furthermore, with Iraq in protests over the political system that the US installed and things related to that, it shows how their intervention wasn’t a success, and also the naivety of the US government.

The US government simply thought they could invade another country and install a style of government that works for them, in a completely different country, without any repercussions. The likelihood of this working was always going to be low, and it was always likely that a lot of people would be against this change. The US failed to understand the nation it was trying to change, and didn’t take into account all of the ethnic groups that live in Iraq, meaning that without this consideration, any system installed would be unlikely to succeed. The problems created by the US intervention into Iraq are now coming to the surface, yet not much is being done by any western state to help solve them. Corruption, unemployment, lack of electricity and water can all be linked back to the US invasion, yet now when it’s all going wrong, the US are nowhere to be seen to help Iraq, despite these recent protests and over 300 people dying. The fact that there have been protests every year since 2011 when the US finally withdrew, shows how there are distinct failures in the US intervention in Iraq and that the US intervention shouldn’t be called a success, not until the protestors achieve what they want and peace is restored.