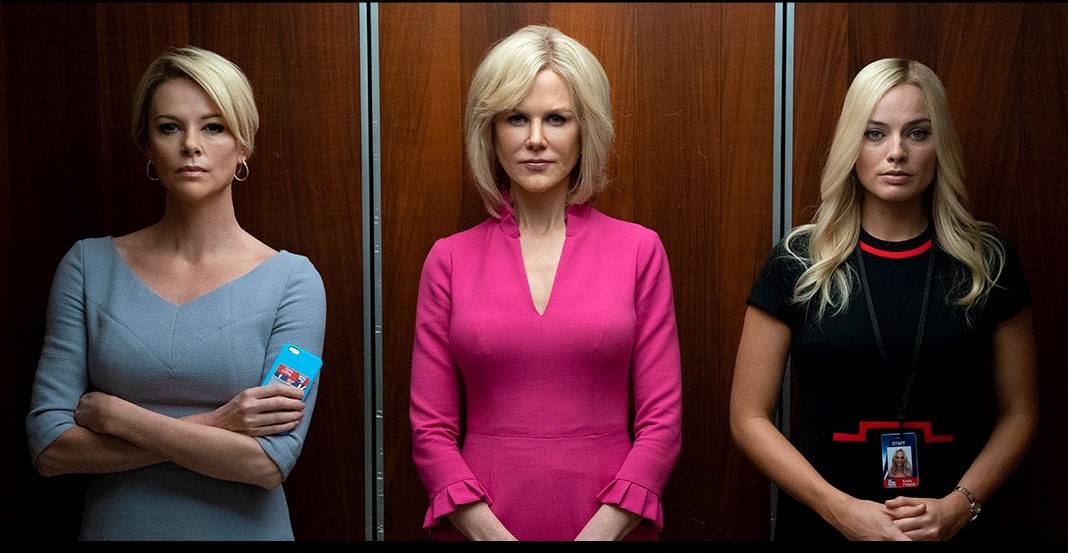 Ellie Burridge
I've watched Iron Man 3 thirteen times, so take all of my reviews with a pinch of that.
Published at 14:30 on 7 February 2020
Images by Lionsgate Films

Content Warning: This article contains themes of sexual harassment which some readers may find distressing.

When The Big Short came out in 2015, it didn’t exactly feel like a watershed moment for how movies about recent history would be made. The film was well-reviewed and had a strong presence at that year’s Oscars (including a truly baffling nomination for Best Editing), but it would have been difficult to predict the impact that film (and director Adam McKay) would continue to have five years later.

Watching Bombshell feels like watching a karaoke rendition of The Big Short. It’s got all the basic components: the lightning-fast editing that sticks a middle finger up at continuity, the faux-documentary style, fourth-wall breaking and supercilious narration that treats the viewer like an absolute moron. But when Adam McKay made The Big Short, there was fire behind it. Through all the gimmicks and the flashy style, McKay seemed to be telling his audience that he cared. He was angry about the financial crisis, too. That was how and why The Big Short tapped into the mood of the moment, not because that approach to film making was endlessly imitable for every occasion.

Just look at Vice, McKay’s follow-up to The Big Short. It’s more of the same, except this time celebrities are doing ostentatious impersonations of well-known politicians (Christian Bale as Dick Cheney, Sam Rockwell as President George W. Bush etc.) and the seams are starting to show in McKay’s holier-than-thou directorial voice. Vice fared worse with critics, although much better with the Oscars (go figure).

As for Bombshell, it’s actually directed by Jay Roach (of Austin Powers fame), but when compared with his previous films about real-life events — the dour Trumbo, boring All the Way and conventional Game Change — it’s clear that he’s coping McKay’s homework. And it’s all wrong.

Bombshell is this year’s #MeToo film; it deals with the revelation that Fox News head Roger Ailes was sexually harassing his employees. The situation itself is complex: Fox News is arguably an organisation which profits off its dissemination of hatred and fear mongering; these women were victims, but they were also complicit in — and often perpetrators of — the worst of what Fox News has to offer. None of which is to say that a film cannot or should not be made about this subject, but such a film would have to have a screenplay which navigated the issue with nuance and restraint. What we got instead was feminist hero, Megyn Kelly.

It’s right there in the lyrics of the film’s theme song (written by superb artist Regina Spektor, who I am choosing to forgive): ‘You’ve got them real long legs / Won’t you tell us a story? / Doesn’t matter if it’s wrong or right’ and ‘One little soldier / Plugging into your power / One little solider / Calling you a coward’. The film’s stance is that these women are brave soldier, fighting the good fight. There is no room for morality a little greyer than that in Bombshell’s screenplay (written by — oh yes, one of the writers of The Big Short, Charles Randolph), which consistently makes choices that are absolutely baffling in their tone deafness.

For one thing, there’s the fact that the story is led by three protagonists: Gretchen Carlson (Nicole Kidman), Megyn Kelly (Charlize Theron), and Kayla Pospisil (Margot Robbie). These women very rarely interact (each existing in their own separate segments of Fox News and the film) and only two of them are based on real people. Kayla supposedly represents a compression of a number of real-life women into one millennial, evangelical package. Her character, buoyed only by an excellent performance by Robbie, is incomprehensible. She’s a staunch Republican and proud supporter of the religious right, but she is also embarking on an affair with a female co-worker, seemingly without reservations or panic about her own sexuality. She floats meaninglessly through the narrative, with the exception of the scene in which she is harassed by Ailes.

That scene is the unquestionable low point of the movie. Instead of attempting to distance himself from the male gaze, Jay Roach commits to it fully, presenting the moment of Kayla’s painful exposure to her boss as something to be leered at. The lack of a female director or writer on a film such as this is not inherently wrong, but Roach seems content to show exactly why any woman at all would have been better suited to the job of depicting sexual abuse than he is. When Kayla lifted the hem of her skirt to its highest point, a woman in my screening muttered: ‘You’ve got to be f***ing kidding me.’ I must say that I agree with her sentiment.

The most glaring problem is one of tone. Bombshell flits between comedy and self-seriousness faster than a fly, and the constant shifts only alienate the viewer. There’s continual friction between the style Roach lifted from McKay and the story he is telling — and ultimately they prove incompatible. Perhaps Hollywood can hit the pause button on this style of film-making, at least for a while.

Bombshell is a film told by the wrong people in the wrong way. Its unwillingness to delve into moral complexity or to condemn the actions of its protagonists make it a weak attempt at ‘activism’, but its entertainment value is not much higher. Worst of all, Kate McKinnon is cast in a film which almost entirely consists of people doing celebrity impressions, and does not impersonate a celebrity.