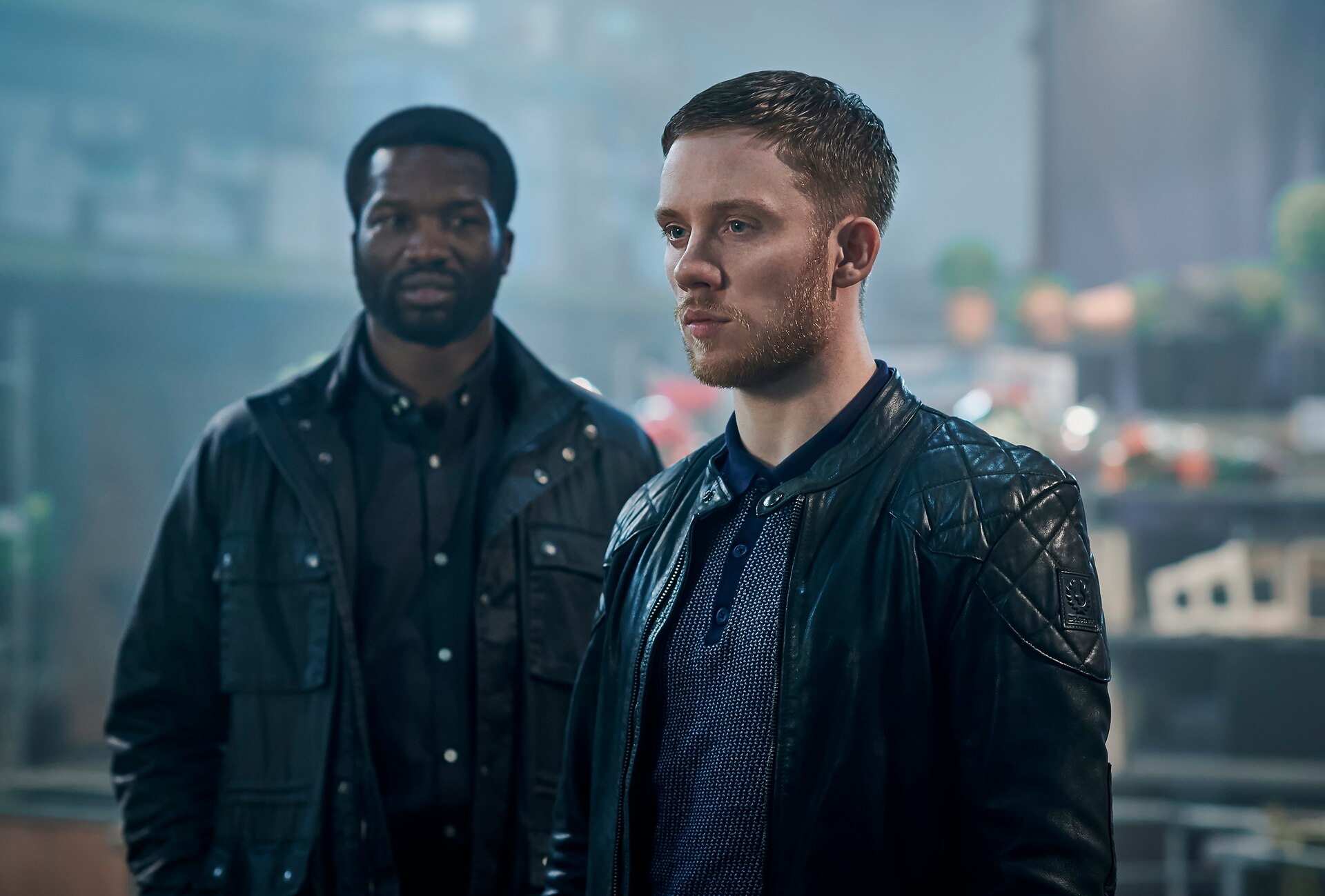 Matt Taylor
Third year English student and Film Editor with the capacity to geek
Published at 07:00 on 7 May 2020
Images by Sky

The world of British crime dramas is a heavily mixed bag. For every Life on Mars, Broadchurch, or Luther, there are tens of others that fly under the radar purely because of their mediocrity. Perhaps that is why Gangs of London feels so refreshing. The Raid and Apostle director Gareth Evans here turns his hand to mob drama in a series that is, by turns excited, devastating, and gut-wrenchingly brutal, among the best British television shows this century.

Finn Wallace, London’s leading mobster, is dead – and no one knows who killed him. His murder leaves a power vacuum in his empire and sets in motion a chain of events so earth-shattering that London’s criminal underworld will never be the same again. Cue a sprawling cast of characters, endless narrative twists and turns, more double-crosses than you can shake a stick at, and action scenes so excruciating you will be forced to peep through your fingers on more than one occasion.

At the head of it, all are the Wallaces and the Dumanis – Finn’s family composed of wife Marion (Michelle Fairley), sons Sean and Billy (Joe Cole and Brian Vernel, respectively), and daughter Jacqueline (Valene Kane), as well as lifelong friend Ed Dumani (Lucian Msamati) and his two children Alex (Paapa Essiedu) and Shannon (Pippa Bennett-Warner). The two families have been intertwined ever since Finn and Ed set up their empire together, but the conflict that arises in the wake of Finn’s death begins to push them apart. Also in play are Elliott Finch (Sope Dirisu), an undercover Met officer tasked with bringing down the Wallaces, and a plethora of other London-based gangsters from all over the world. The cast is about as huge as that of the early seasons of Game of Thrones – a series that, one can’t help but feel, looms over Gangs of London as a clear inspiration. Not that is not a bad thing, of course: Gangs is perhaps best described as the lovechild of Game of Thrones and The Godfather (with the scale and scope of the former, and the intimacy and intricacies of the latter), that is then adopted by The Raid, who teaches it elegantly how to put an action sequence together.

That action is indeed among the series’ highlights; Gareth Evans takes everything he did so well in his two Raid films and Apostle and dials it all up to eleven, upping the brutality, choreography and cinematography to deliver constantly thrilling scenes that, thankfully, serve to push the narrative forward. Thanks to such scenes, the series’ first episode is, in all honesty, better than most action movies I have seen in the past few years – and that is down to a combination of Evans’ brilliant mind, DP Matt Flannery’s stunning camerawork, and all stunt performers involved, with particular credit going to Sope Dirisu. Dirisu is Gangs of London’s hidden gem, a relatively unknown quantity (aside from his fantastic turn in Humans) who here knocks it out of the park on both an acting and a stunt level.

Elliott becomes more integral to the narrative as the series progresses towards its climax, and Dirisu’s earnest performance goes a long way in humanising him, but where he really shines is those action scenes. He is at the centre of the two featured in the series opener and does just about all of his own stunts. A pub brawl in which he takes out at least eight thugs armed with only a dart and a handful of pint glasses is utterly outrageous, but is somehow outshone by those that come later in the series. These are all action sequences of varying scale, but each feels real, somehow, thanks in large part to their sheer brutality – something that audiences have now come to expect from Evans, as we feel every bullet, stab, punch, kick, and slice that is inflicted before us. Each episode features at least one such sequence, ranging from a knife fight to an alleyway shootout, to a jaw-droppingly intense siege in the fifth episode that, genuinely, takes up half of that episode’s runtime, and yet never gets dull. The sheer audacity on display here is ludicrous, yet it somehow works. If nothing else, Gangs of London serves as a showcase for how to make a good action sequence – Hollywood had best take note.

That action, however, would be worthless without a solid narrative and basis in characters for the audience to engage with. Thankfully, Gangs of London has that in spades. Sean is arguably the series’ protagonist, but we see straight away that he is something of a loose cannon. He is arrogant, wanting to prove to people that he is as good of a leader as his father, and that arrogance comes back to haunt him on more than one occasion. Joe Cole puts in a superb shift here, always being sure to let Sean’s emotions bubble under the surface so that we know they are there, but the other characters do not. The line he walks between emotionally blank and emotionally engaged is stellar, and by the fourth episode, when things start to go horrifically wrong for the Wallaces, we realise we really do care how things turn out for Sean and his family. The chemistry between him and the other members of the family is immediately believable – he and Vernel, particularly, make a fantastic duo in the more moving scenes they share together, and Michelle Fairley, of course, damn near acts everyone else under the table.

Indeed, everyone involved gives it their all: Paapa Essiedu also shines as Alex Dumani, brother to Sean in all but blood, whose relationship with him is tested as Sean becomes increasingly reckless, leading to a series of genuinely heartbreaking scenes between the two; Lucian Msamati is as reliable as ever as Ed, Finn’s lifelong friend who just wants the best for both the families and the company – but those interests turn out to be at odds with one another, leading to increasingly rash decisions on both sides as the conflict comes to a head. It is rare, especially in British television, to see such a plethora of stellar performances, yet that is exactly what Gangs of London delivers – not a single actor feels out of place, and all manage to ground a potentially outlandish narrative into something that feels organic, and true to the world in which the show is set.

That narrative is, thankfully, solid. It is twisty and deviating and complex and needs you to pay attention, but the concentration is worth it. The story is balanced fairly equally with the action in the series’ first half before the action is slowly dialled down slightly as the narrative takes hold as we hurtle towards the conclusion – but that is never a bad thing. As said earlier, the action serves the story – and sometimes the story simply doesn’t call for a fight.

Full credit to Evans and his writing team, then, for crafting, characters and a narrative that audiences actually care about and engage with, beyond simple fisticuffs. As tensions rise between characters, our jaws are left on the floor on more than one occasion, and to an extent that I genuinely have not seen in years. The narrative tension Evans and co devise never lets up even once after things get going, and Gangs of London is all the better for it. Every character has sound motivations for doing what they do, making every action believable, even if we may not agree with it. It is pleasing to see a British show take on the ambiguity that US shows have been showcasing for a while now; there are no good guys and bad guys, as such, because everyone is a varying shade of grey, always doing their best, and always for the right reasons, but sometimes just taking things too far.

Gangs of London is that rare show that genuinely does not put a foot wrong for its entire runtime. This nine-episode first series (one hopes there will be a second) is about as close to a perfect British television show as I’ve ever seen. It combines excellent character work, stellar performances, fantastic technical craft, a narrative that never once feels slow or boring, and quite possibly the best action sequences Evans has ever devised, and serves it all up at once in a feast of long-form television. I never thought I would say this about anything, but Gangs of London truly is The Godfather for the modern-day – a masterpiece.