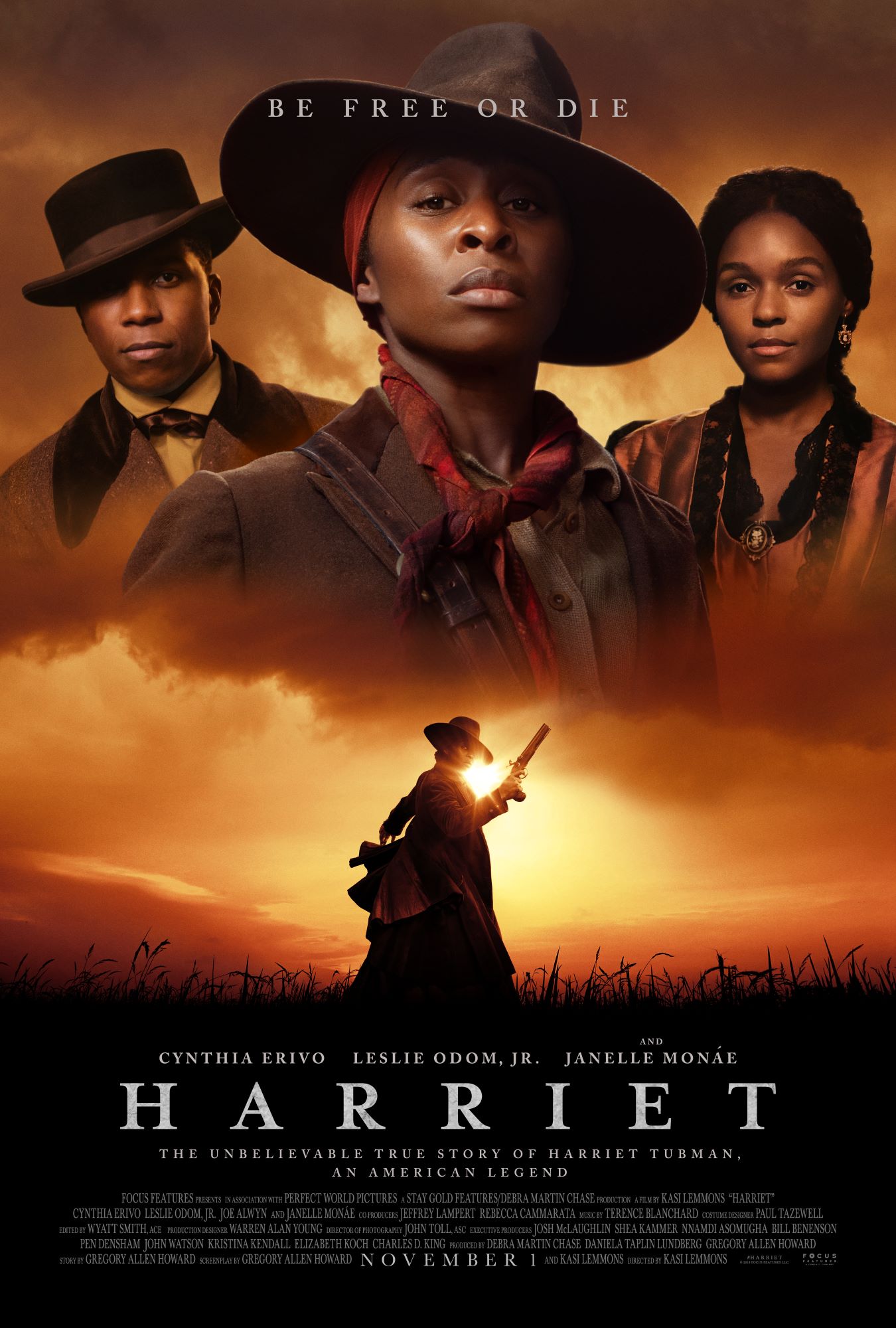 Sam Wait
TV Editor and English student
Published at 10:30 on 7 December 2019
Images by Focus Features
Kasi Lemmons’ Harriet is the long awaited and first biopic of Harriet Tubman, the American abolitionist who was born into slavery in 1822. Twenty-seven years later, Tubman escapes to Pennsylvania, only to return shortly after to rescue her enslaved family among seventy other slaves on the Underground Railroad.
Upon watching this movie, you begin to wonder how incredulous it is that only now is Tubman’s life being immortalised into film.  However, when it was released that in the 1994 meeting discussing the cast, Julia Roberts (of Pretty Woman and Eat Pray Love fame) was suggested to play the title character, we can begin to understand the obstacles which lay in its development. However, it is easily said that Lemmons’ biographical epic was worth the wait.
The task is an incredible one; to capture Tubman’s immeasurable list of achievements within a digestible 125 minutes. It could be said that Lemmons suffers under her brilliance – by successfully dramatizing her achievements of escaping slavery, rescuing slaves through the Underground Railroad, as well as tackling her first expedition as a woman in the Civil War – the film falls flat in terms of character development.

Whilst Lemmons’ Harriet succeeds in creating a film to honour her incredible legacy, it unfortunately suffers in attempting to encapsulate both Tubman’s life and personality within two hours. Instead, Harriet appears as a faultless hero who lacks weakness or the ability to make mistakes. Gregory Allen Howard, who wrote the screenplay with Lemmons, has created a faultless plot: what the film suffers from is a lack of time.

However, the choice to focus on her achievements was the right one. The film’s fast pacing allows the audience to remain engaged throughout and encapsulates the true magnitude of Harriet Tubman’s achievements. Particularly with its BBFC certificate as a 12A, it is easy to imagine this film being accessible to younger generations, as the action-based plot both favours and teaches simultaneously.

We meet Araminta ‘Minty’ Ross (Harriet Tubman’s ‘slave’ name before changing it) as enslaved for a handful of scenes before she escapes from her slave master, fleeing from her entrapment for over one hundred miles on foot before reaching freedom in Pennsylvania. Never is the audience allowed to see the frightened, terrified woman that had to leave her husband and entire family. She enters and exits our screens as the heroic Harriet Tubman, as we’re shown only recurrent glimpses of the ill treatment which has led her there.

However, the running time that doesn’t allow for Tubman’s character development is made up for in Cynthia Erivo’s (of Widows and Bad Times at the El Royale) stunning performance. The hints of fear she must feel when leaving her family and her anger at enslavement are flawlessly portrayed in her presentation of the nineteenth-century activist. Erivo truly embodies the miraculous ‘Moses’ as Harriet leads her people to freedom.

This is complimented by the striking performance of Harriet’s former slave owner. Gideon Brodess (Joe Alywyn, of Mary Queen of Scots and The Favourite fame) is the son of Harriet’s slave owner Edward Brodess (Michael Marunde) who takes over the role after his father dies. This highlights the systematic oppression of slave owning families of the 1800s, and the inherent rite they thought they had to own people.

Gideon’s continued obsession with ‘catching’ Harriet throughout the film is relentless, just like the hunt from the other slave owners to take her down. This uproar of slave masters blames Gideon and his mother for the loss of their slaves, as they once owned Harriet. This is a triumph in the script’s writing, as it acts as a reminder of the horrifically dehumanising nature of slavery. To watch Gideon’s mother lament to the rebels with a defence that they are, in fact, the victims sent shivers down my spine.

Howard and Lemmons succeed in disgusting the audience with its brutal history, confronting their twenty-first century audience with abhorrent white supremacy, which a modern audience – particularly one witnessing America’s current political climate – must always be reminded of.

Alywn’s performance as Gideon matches Erivo’s in talent and intensity, and the pair serve as the film’s central rivalry.  At the film’s climax, Harriet and Gideon stand in front of each other with years of injustice between them. Our heroine addresses him with a simple statement which embodies the entire message of the film: ‘People ain’t meant to own people, Gideon.’

Lemmons’ Harriet is in awe of its subject, leaving the audience in admiration too. Though this succeeds in creating a didactic biopic, Lemmons’ portrayal of Harriet Tubman could have been improved with a clearer character arc, something that could have been developed if given enough screen time. Otherwise, Harriet leads the way as a brilliantly emotive commemoration of the legendary Harriet Tubman, an activist who must never be forgotten.

Harriet is in cinemas now.