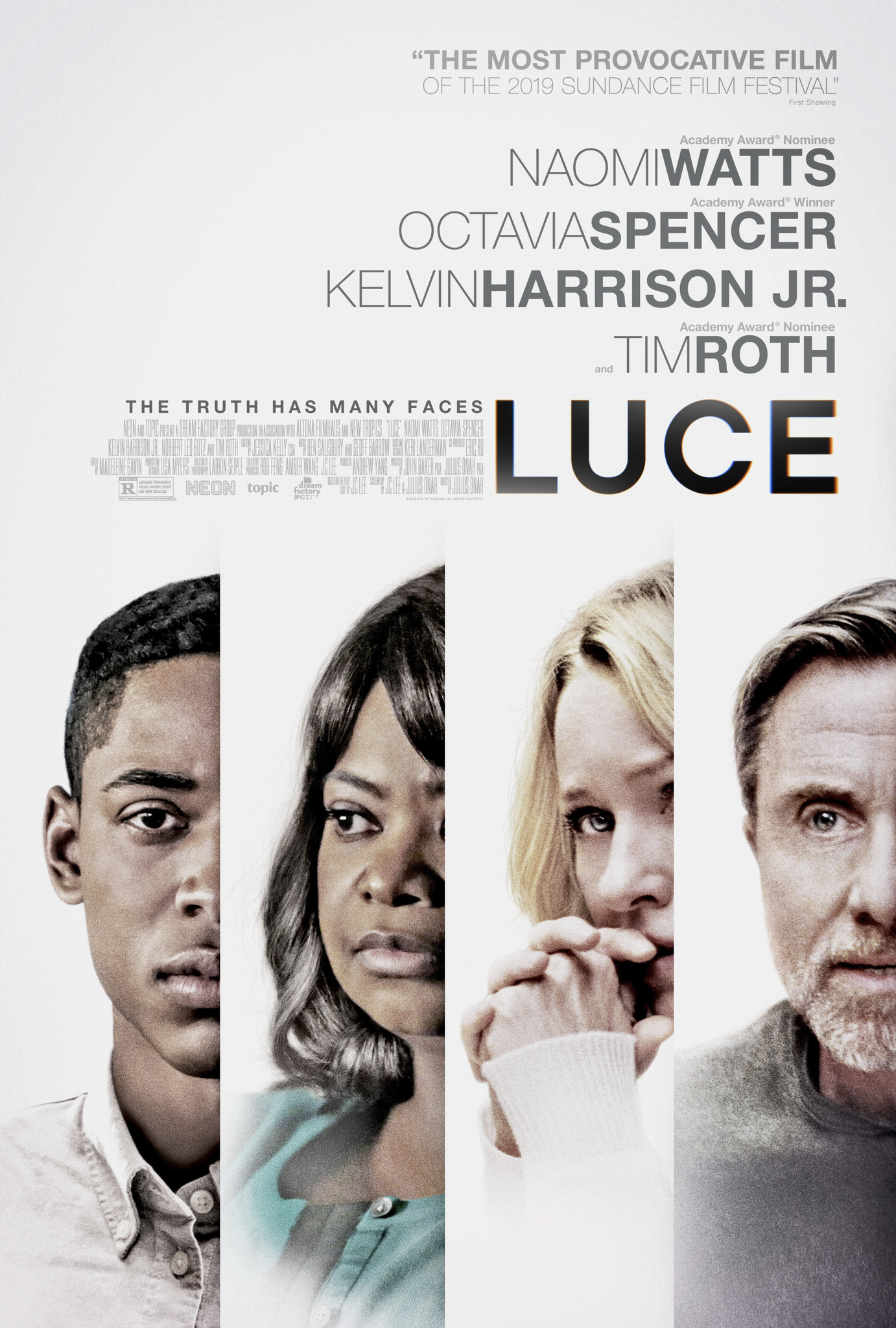 Written by kenyahcoombs
Published at 17:00 on 30 November 2019
Images by NEON

Writer-director Julius Onah shares with the world his troubling and gripping drama Luce. Our main character, played by Kelvin Harrison Jr, is a black high school student who was adopted at the age of seven from war-torn Eritrea, where he had been raised as a child soldier. After participating in years of therapy and rehabilitation, he turned into an all-star, considered the poster boy of black excellence at his predominantly white Virginia high school.

However, his achievements come with a great price. Luce begins to find himself existing in a small, claustrophobic world, one that was created for him by the country he currently lives in. Although it may seem much freer than the one forced on to his black schoolmate who had been labelled as a weed-smoking delinquent, it is a box nonetheless. Luce finds himself having to work twice as hard to impress while being given a fraction of the leeway his white friends have been allowed. Before giving a speech to the school, Luce practices in an empty auditorium. He discusses his tragic, violent childhood and how lucky he is now that he lives in the United States, where he is free to be whoever and whatever he chooses to be, as tears fall down his face. It is a scene that has the audience full of emotion, full of an overwhelming intensity, and is one of the only moments throughout the film that the audience spends time alone with Luce.

As such, Luce does not have a day off. His always cheery and charming facade is on all the time. This shows that perfection is not a goal for Luce, but it is a given. The mystery of the film lies in finding out who the real Luce truly is. Due to his background, his adoptive parents Amy and Peter live with an underlying fear that the violence from Luce’s past might erupt with age. When Amy is called in to see Harriet, Luce’s history teacher, we begin to see the cracks begin to appear. Harriet is concerned with a paper Luce has written. The task of the paper was to write the voice of a historical character, and Luce had chosen to write in the voice of Frantz Fanon, a revolutionary psychiatrist, who believed that violence was an unavoidable part of decolonisation. What causes alarms is the intensity in his arguments, and this leads to a search of his locker where she found a bag filled with illegal fireworks.

What follows from this is an intense and winding puzzle, which won’t be described in detail, as the great pleasure of this film is piecing it all together. It is a drama that feels like a thriller. The film balances on a razor’s edge throughout, forcing us to question our own preconceptions. It encourages us to look past characters who can be easily defined by their race, gender, or class. One of the main arguments of this film is that people exist on a spectrum, one that is varied and complex for all of us – an obvious truth we often ignore.

Luce is a difficult film to unwrap. Onah does not want viewers to leave after the film feeling like the puzzle has been solved. Instead, he wants us to feel angry, confused, heartbroken, uneasy, but to also feel an uneasy familiarity with living in society today. This familiarity in Luce’s struggles sparks conversation with what it is like living in America – and arguably what is like living around the world for many. Luce does not have the answers, and that’s the point. The goal of the film is to force us all to start asking more of the right questions. To start being uncomfortable with the comfort we seem to have with the way in which society operates today. We seem to be content with the status quo on how things operate, and Onah wants this to change. He wants us to see, through Luce and his experiences, how unrealistic and difficult it is to live in our current world. He wants us to start questioning and challenging this, to spark change for the better. But let’s emphasise asking the right questions. It’s important for us to know what questions and what challenges need to be made to have any kind of impact.

So what do can take away from Luce? It is a film that shines a light on the current struggles many people in America, and indeed around the world, battle with in terms of their identity. We see that past traumas remain a constant source of internal turmoil, one that cannot be ignored. But most importantly, we see that we may be content with the way in which the world operates, and maybe we should not be. Onah hopes, and so do I, that films like Luce encourage us to start asking the right questions necessary to be impactful. Our familiarity with Luce and his experiences tells us we understand there is an issue, so the question is now: what do we do from here?

Luce is a most see. A thought-provoking film that encourages its viewers to ask the right questions. If you like thrillers and leaving a movie with more questions than answers, then you won’t go far wrong with this one.

Luce is in cinemas now.

Imagery and stills courtesy of NEON. All rights reserved.