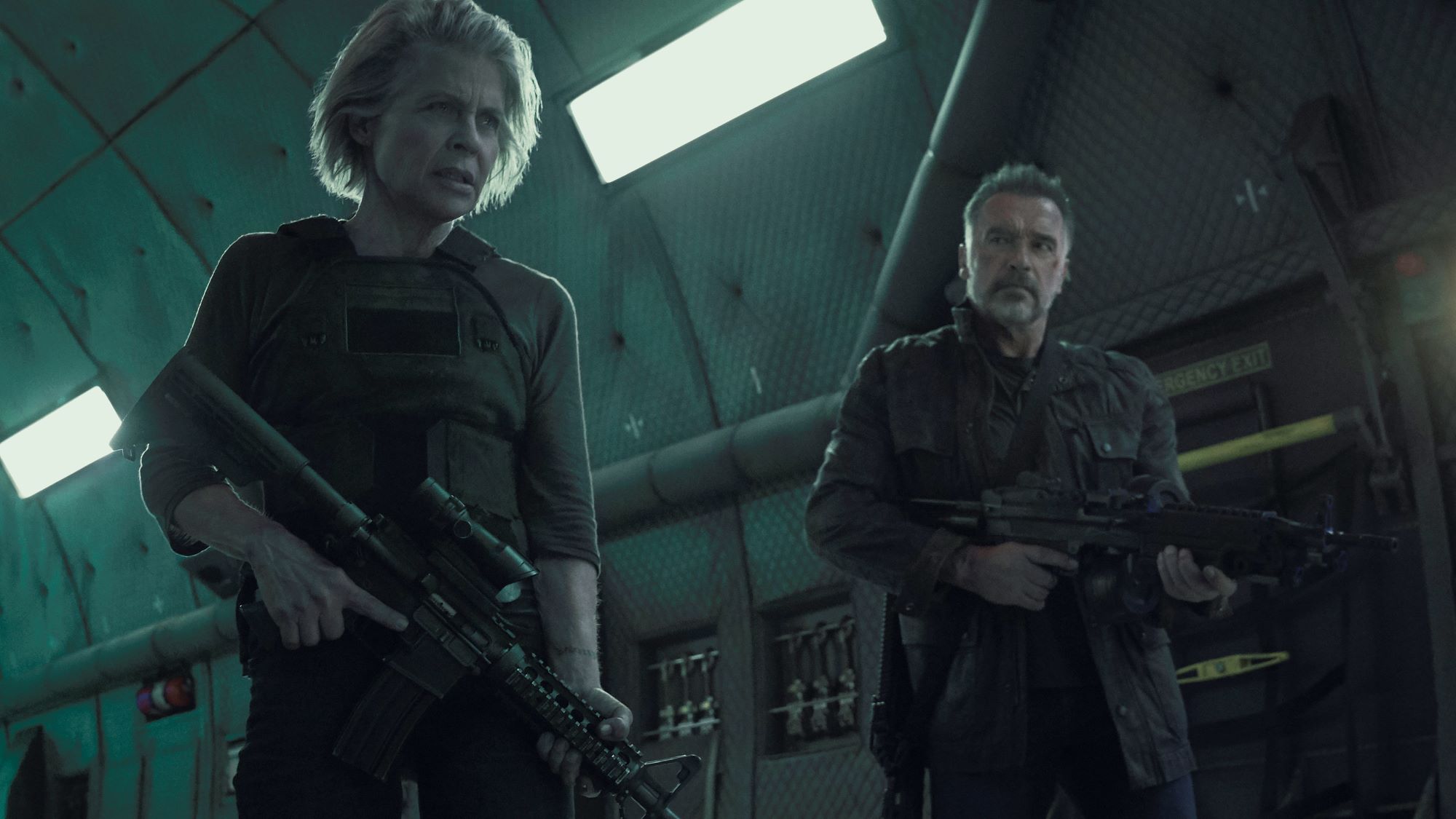 The sixth instalment in the Terminator franchise retreads some old ground, says Film Critic Ellie Burridge, but is a welcome return to form for the series

Ellie Burridge
I've watched Iron Man 3 thirteen times, so take all of my reviews with a pinch of that.
Published at 10:44 on 8 November 2019
Images by Fox

In 2019, the apocalypse feels closer than ever. Maybe that’s why Daniella Ramos (Natalia Reyes), more than any other Terminator protagonist before her, is so willing to believe. Being told that the world will imminently collapse into ruin barely seems to shock her, and even being rescued from a Terminator (one of the liquid metal ones, to boot) by an ‘augmented’ human with metal underneath her skin doesn’t send Dani into the paroxysms of disbelief we’ve come to expect from these characters’ first encounters with robots from the future.

The horror presented by the killer robot is situated right alongside the horrors of our modern world. When the three protagonists (one of whom is Mexican) cross the border from Mexico to America, they must face both the threat of the shapeshifting Terminator and the brutality of the border patrol guards. It’s unclear what exactly the filmmakers want you to think about the big action sequence in the border detention centre, and it doesn’t reek of sensitivity, but there is something to be said for a mainstream movie which makes a point to show its heroes freeing migrants from cages.

Aside from its modern flourishes, Terminator: Dark Fate has a lot in common with the original Terminator. In the tradition of Star Wars: The Force Awakens, the screenwriters have elected to rehash the movie that started it all with a few updates and a return from the legacy characters. The familiarity is a little comforting. Dani (Reyes) is an average young woman who becomes the unexpected target of a Rev-9 model of Terminator (played by Gabriel Luna), only to be protected by a mysterious person from the future (Mackenzie Davis, showing off some real action chops as an ‘enhanced’ human). While escaping from the Rev-9, Dani and Grace (Davis) run into Sarah Connor (a triumphant return from Linda Hamilton) and, of course, Arnold Schwarzenegger.

Dark Fate is directed by Tim Miller (of Deadpool fame), but it could have been anyone. More than anything, it feels as though the studio is the one behind the camera, desperately trying to figure out how to recapture the thing that made audiences love Terminator in the first place. They throw everything at the wall to see what sticks: the same basic plot, direct call-backs in the dialogue, Arnie as the robot with a heart of gold, Linda Hamilton in badass mode. And it kind of works. Very little is truly new or exciting, but when it comes to the Terminator franchise the bar is so low that wringing any hint of enjoyment out of the audience counts as a win. Even when the action scenes don’t carry the same gravitas as those from the first two instalments, you can think of literally any scene from 2015’s Terminator Genisys and comfort yourself with the realisation that it is at least better than that.

The only glaring problem is that the writers of Dark Fate seem to have taken a page out of Disney’s remake/reboot playbook. Increasingly, studios seem to think that they can justify the existence of blatant money grabs by refuting ‘critiques’ of the originals that had no bearing on the actual quality of those films. Think of the Aladdin remake’s hashtag girl power ballad, or The Lion King (2019)’s girl fight between Nala and the bad female hyena. These progressive aesthetics range from misguided to downright insulting. In 2019, it is not ‘woke’ that Sarah Connor was originally chosen as a target for the Terminator for being John Connor’s mother, and the three male screenwriters of Terminator: Dark Fate want you to know that. Never mind that Sarah Connor is one of cinema’s most beloved female characters, or that The Terminator (1984) was co-written by a woman (Gale Anne Hurd), who I can confidently say had more of a grasp on the female experience than David S. Goyer, Justin Rhodes and Billy Ray do.

This is not to say that Terminator: Dark Fate doesn’t have its feminist moments – they’re just more effective when they’re not being directly alluded to in dialogue drenched with the lack of subtlety that can only be achieved by men trying to prove that they ‘get it’. Linda Hamilton’s return as a sixty-something-year-old Sarah Connor who still kicks ass is the only truly great thing the franchise has done since the end of Terminator 2. It’s still a rarity to see a female action star older than one of Leonardo DiCaprio’s girlfriends, but Hamilton single-handedly proves why that shouldn’t be the case. Her first appearance in Dark Fate gave me chills – like many young feminists (and lesbians), my first viewing of Terminator 2: Judgement Day was a revelatory experience, and there was a genuine thrill in seeing Sarah Connor again. Hamilton’s performance is tough and cynical, and only slightly hampered by ridiculously clunky dialogue where she bemoans being ‘only a womb’ (I seem to recall her being key to bringing down Skynet, but never mind).

There’s also Mackenzie Davis as an androgynous, tough-but-sensitive soldier from the future. The action scenes are at their best when she is at the forefront of them, but she also shines in the film’s smaller moments and the chemistry between her and Ramos gives emotional weight to some of the cheesier moments. The triad of Dani, Grace and Sarah Connor is Dark Fate’s strongest dynamic – so much so that by the time Arnie inevitably shows up, it doesn’t feel like there’s much need for him. After twenty-five years, Sarah Connor is finally allowed to outshine him again.

Terminator: Dark Fate is a re-tread of familiar ground, but if you’re a fan of the franchise, that may well be enough to make it worth a watch. If nothing else, the return of Linda Hamilton is worth celebrating.