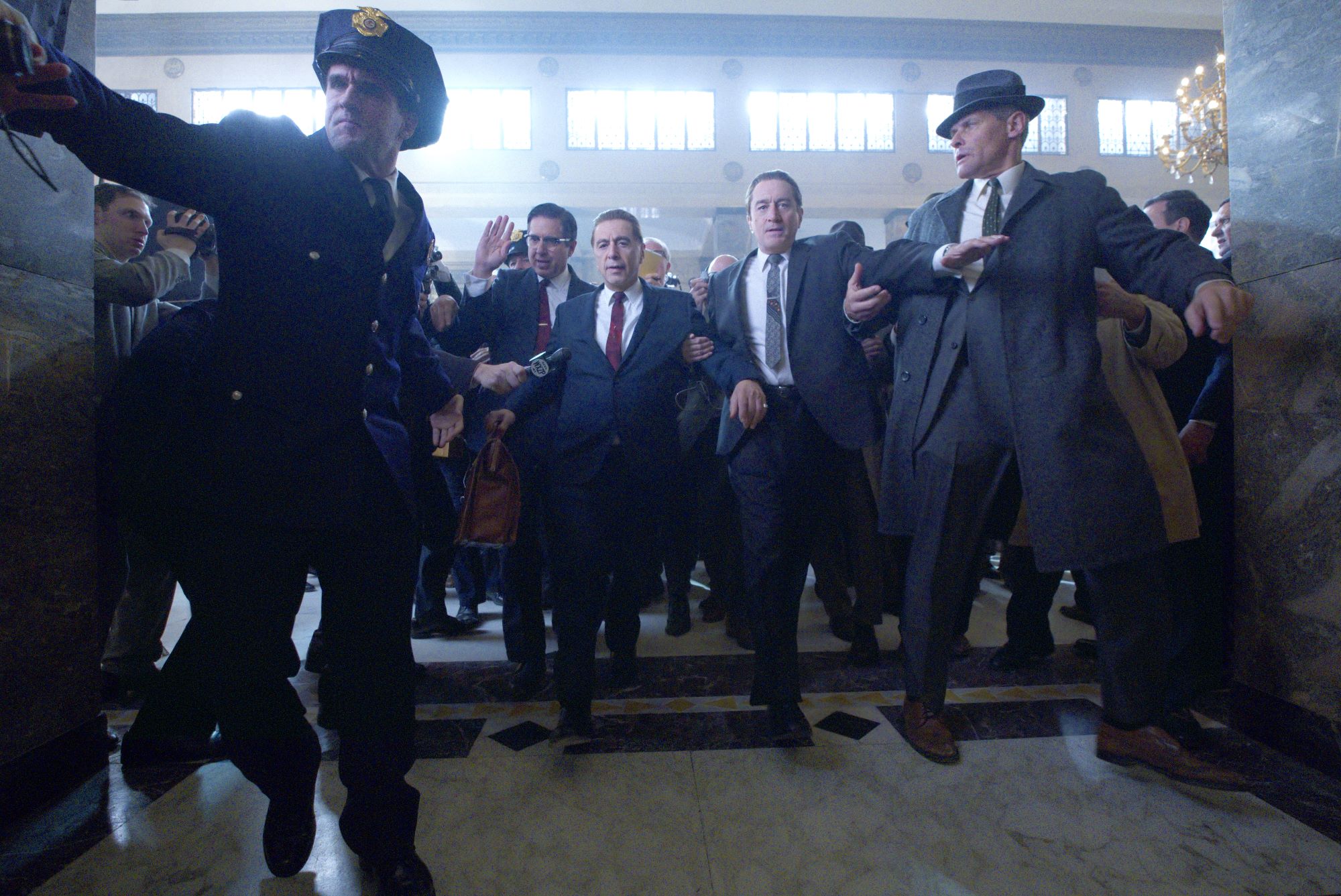 Film Critic Sam Denyer is blown away by the subtlety of Scorsese’s The Irishman, a magnificent return to form for the master of the mob movie

Sam Denyer
Politics and IR student with a thing for the Babadook
Published at 14:30 on 3 December 2019
Images by Netflix
Maybe watching from your sofa on Netflix will help make the experience more manageable, but seeing The Irishman in all its 209-minute glory in the cinema is to experience it as director Martin Scorsese intended: a fragmented odyssey of a hitman’s life, itself reflecting how his existence fractures with age, the only thing the mob couldn’t control.
That man, Frank Sheeran, is played by Robert De Niro. These days, De Niro’s legacy is complicated: we live in times closer to the likes of Dirty Grandpa than Goodfellas. Yet the magic of Scorsese and De Niro’s partnership has not faded. This is their best work in years, precisely because it retains the strengths of their past work but reminds us how much time has passed and how much things have changed. In some ways, The Irishman is a swan song to energised lives its creators can no longer lead, but it also reminds us that their creative vigour is far from expired.
Somewhat based on the real Frank Sheeran’s life, the film opens with the World War Two veteran talking us through how he became a mafia hitman. It was not a particularly straight-forward journey, which is why we jump back and forth through his life, often decades at a time. De Niro plays Sheeran irrespective of the period, aided by de-ageing technology which lifts his skin and smooths his wrinkles. At first, it is a little too smooth, but the distraction does not last for long. It is only truly strange when young De Niro attacks a man who insulted his young daughter, his sluggish gait betraying the 75-year old man behind the young face. Yet, his character is a harbinger of death, lumbering into our lives with footsteps heavier than his heart. Perhaps the contrast works after all.

Regardless, the strength of this choice is De Niro, who can still appear intimidating but with age has acquired an elegaic air which elevates The Irishman beyond typical gangster fare. He is accompanied by a rogues gallery of the genre’s best, chiefly Al Pacino and Joe Pesci, the latter returning to the screen for the first time in nearly ten years. Pacino is at his funniest since Heat and his portrayal of union boss Jimmy Hoffa drives much of the plot. Pesci, meanwhile, is quietly terrifying as one of the chief mobsters, the behind-the-scenes puppeteer to Pacino’s charismatic public figure. Such is almost entirely subtext: the character does not threaten or glower because Pesci skilfully offers the kind of gravitas which makes such unnecessary. It is a disarmingly alarming performance.
Its nature as an odyssey means that certain initial sections drag more than others, but everything comes together beautifully in the final half-hour. Time passes, De Niro’s edges closer towards his real age and with it acquires the mournful gaze of a man whose life has been all work and no play. But, instead of losing his grip on reality, Sheeran is anchored to it, weighed down by the consequences of killing for a living and alienating a family who refuse to care for him any longer. Anna Paquin co-stars as his daughter Peggy, who barely speaks but imposes sweeping emotional and moral judgements on him with her expressions alone. Lesser filmmakers would have her explode in anger at Frank for his line of work; Scorsese knows that her silence is far more devastating. He and his perennial partner, editor Thelma Schoonmaker, elevate the film’s end with a series of shots which amplify Frank’s self-inflicted isolation. Paired with the mundane tragedy of his failing body makes the ending, by which he is almost literally a shadow of his former self, even more powerful.

Martin Scorsese is back with Robert De Niro and Joe Pesci, offering an intricate portrait of physical deterioration and moral self-assessment well worth sparing three-and-half hours for.

The Irishman is now streaming on Netflix.