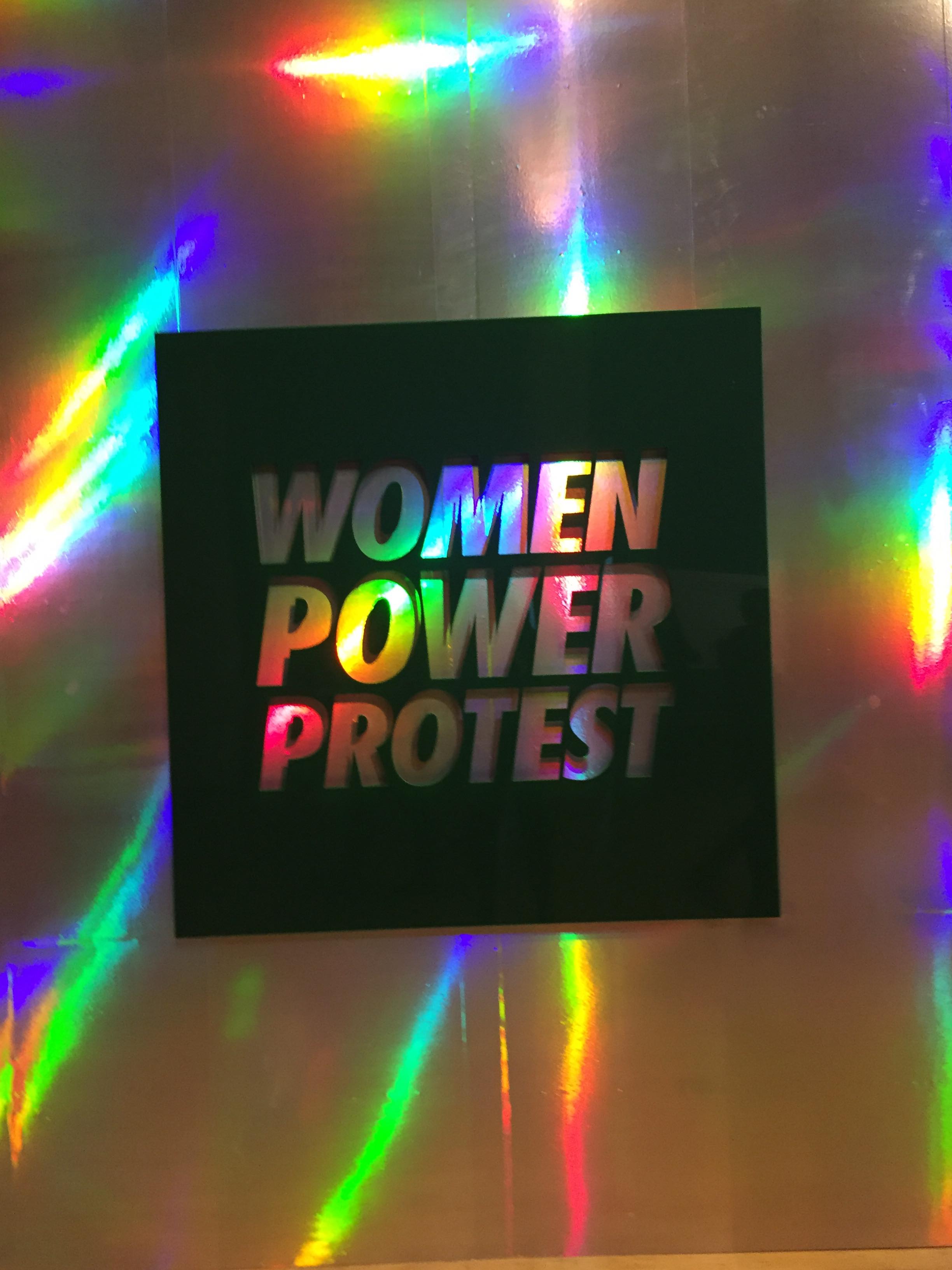 Birmingham Museum and Art Gallery are celebrating the centenary of the first women’s suffrage with ‘Women Power Protest’, an exhibition that addresses the experiences of women after this historic moment in feminist history. It is crucial to note alongside any mention of women’s suffrage that the number of women who could vote 1918 was limited, with only women over thirty who met minimum property requirements being granted the vote. This changed with the Representation of the People Act in 1928, which established that women over 21 were to have equal voting rights with men. This exhibition explores the complexity of modern womanhood, drawing upon the continuity and the changes after women’s suffrage was secured.

‘Women Protest Power’ requires us to ask difficult questions, namely, how far have we come since 1918? Fifty-five female artists frame the experience of womanhood alongside wider aspects of personal identity such as race and sexuality. At the forefront of the exhibition is Marion Coutts’ For the Fallen (2001), an instant nostalgia hit in the form of an old, worn vaulting horse, engraved with words befitting a memorial. This work sets the tone for the exhibition; a tongue in cheek reference to the embarrassment and discomfort that characterises many of our school days, but also a recognition of the women who have been ordered, controlled and exploited by authority higher than them, and who could never rise up. Patriarchal oppression is the subject of many works in this exhibition. Jessica Voorsanger’s Susan Dey’s Diet (1994) envisions the diet of the star of cult 1970s sitcom ‘The Partridge Family’, from the tabloid articles about her. Dog biscuits, toothpaste and laxatives are wrapped in pink packaging under the guise of ‘beauty tips’, a commentary on the dangerous consequences of celebrity media’s scrutiny and commodification of the body.

Most difficult to observe are the works that address sexual abuse. Especially challenging is Margaret Harrison’s Rape (1978), which places copies of famous works such as Millais’ Ophelia in the context of subjection and exploitation by positioning them above newspaper articles, statistics and reports that highlight systematic failures in the support of those who have been sexually assaulted. Sonia Boyce’s Mr close-friend-of-the-family pays a visit whilst everyone else is out (1985), with the ‘friend’s’ outreaching hand the centre focus of the canvas, framed by a swirling mess of searching fingers, was chosen by MP Preet Gill as an image that resonated with her. Preet Gill rightly noted the need for an exhibition that confronts us with the experience of victims of abuse, noting that we instinctively shy away from engaging with their testimonies, ‘because as a society we can’t accept that abuse is an inherent issue grounded in the inequalities that women face.’ The institutional oppression suffered by women is further explored in relation to race. Maud Sulter’s As a Black Woman (1985) is a collage of poetry and newspaper articles about the violence experienced by black women – ‘As a black woman’, the poetry states, ‘every act is a personal act, every act is a political act’. Indeed, Claudette Johnson’s Trilogy series (1982-86) depicts the very act of being visible as politically loaded- her portraits of black women seek to empower a group that lacks representation within art.

Artists also reference some other potential experiences of womanhood. Louise Bourgeois’ The Bad Mother (1998) depicts the messiness of motherhood, the eyes and breasts of the mother figure leaking tears and milk as her toddler clings onto her leg, while Kathy Prendergast’s The End and The Beginning (1996), consisting of the hair of her mother, her daughter and herself spun round a spool, comments on the legacy each generation passes on to the next. Women’s solidarity for a common cause is explored by Turner prize winning Lubaina Himid in Cotton.com (2002), a tribute to the workers of Lancashire cotton mills who defended African slaves in America.

Overall, Birmingham Museum and Art Gallery’s ‘Woman Power Protest’ does well to present such a varied array of feminist art. A broad range of experiences are communicated; the issues that continue to blight the lives of many women nationwide, and worldwide, are entwined with messages of empowerment, strength and tenderness. The exhibition highlights that, a hundred years since the beginning of women’s suffrage in Britain, women continue to address and resist injustice and oppression and to exercise their voice in public spaces to engender change.