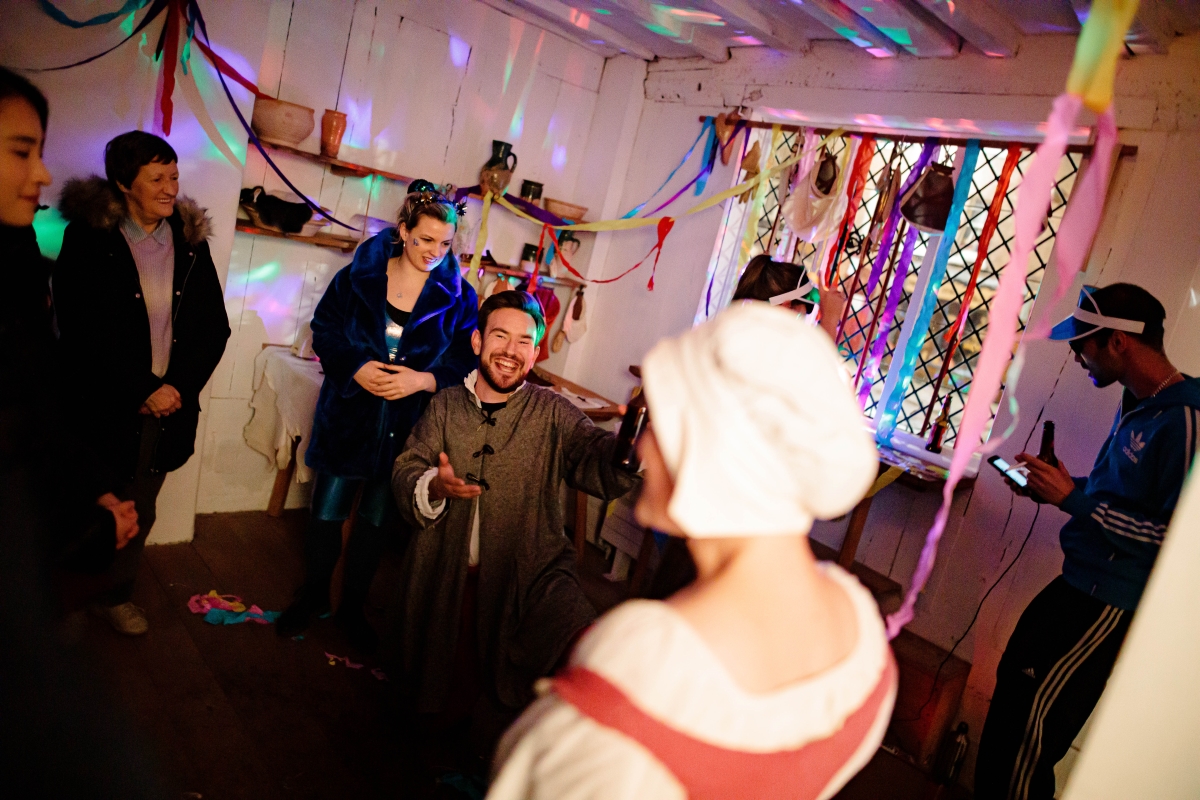 Culture Critic Sophie Heinze reviews the immersive house party experience at Shakespeare’s birthplace in Stratford, encountering the past and present influence and impact of Shakespeare’s life

It is a rainy day in Stratford-upon-Avon and a few people were standing outside of Will’s Kitchen, a new café in town. A woman asks kindly if we are here for the ‘Houseparty’ and invites us in. And just like that, I have stepped into a museum’s tour and play and quest all in one.

House Party on Henley Street is produced by Compass Presents for the Shakespeare Birthplace Trust. The trust invites you to celebrate museums at night. The evening starts off in ‘Will’s Kitchen,’ which is opposite to Shakespeare’s Birthplace, with a welcoming, energetic, and soothing ambience. The lovely and helpful staff offer you (non) alcoholic beverages (my rose wine, though from the UK, was nice) and snacks, mini-pasties, mini-cheeseburgers, and a fancy looking salmon sandwiches. Watching a photo montage of the historic Stratford while listening to, first, classical music, and then Drum ‘n’ Bass and Techno. The audience is loudly wondering what they have gotten themselves into.

‘I didn’t know what is going on tonight,’ ‘I am expecting anything,’ were things you could hear all over the room. And I thought the exact same thing. All I knew was that there will be a twist at Shakespeare’s pad, we would play a part in shaping the Bards’ life, it had something to do with a party and that food and drinks were included.

Enter the hosts: Puck (A Midsummer’s Night Dream) and Ariel (The Tempest). They welcome us with a heated argument and soon it was clear that Puck, disliking Ariel, very much wished Shakespeare was never born and could, therefore, never write Ariel.

We had an hour to ensure Shakespeare’s parents will conceive their son or life as we know it today would forever be changed; Ariel and Puck vanishing from existence. And so, the quest started. Divided into two groups the audience met various characters to find out how to bring John and Mary, Shakespeare’s parents, back together which, as you might have guessed, ended up in throwing a house party for them.

Throughout the whole 90 minutes of the performance, the energy was high. Though it was sometimes difficult to see the actors, you could always clearly hear them. Nonetheless, some of the reasoning and motivations behind some actions were not clear to me. It was nice to watch the acrobatics performance, and comical to listen to one of the characters singing in Italian, yet, it did feel very random at times.

Following the storyline, I learned about the Elizabethan time; its (party) habits, about John and Mary and Shakespeare, their early family life. Between trying typical ‘romcom’ moves on the couple and raving in Shakespeare’s birthplace (the ‘#Ravespeare’ was born), there suddenly was a very emotional scene. We were shown the young couple struggling with the loss of two children, Joan and Margaret, who both died within a year of birth. It was not merely a moving scene but also a portrayal of a usually unspoken topic, losing a child early on in life. Additionally, the serious scene got the audience down from the high of partying and running around, back to reality. This made it easier to think about the meaning of the evening; Shakespeare’s influence and importance on our world. This was addressed very subtly during the performance through hinting that we might lose Shakespeare’s heritage. At the end of the performance, this was then presented more overtly. John and Mary discussing their son’s achievement and impression on the world. This, thankfully, ensured Shakespeare’s conception and the world was saved.

It was an interesting and refreshing way to be told about history and culture. I, personally, very much enjoyed the focus on the parents and their family life (before the birth of William Shakespeare). It was something unknown to me and contrasted to the usual focus on Shakespeare and his life growing up in Stratford.

Furthermore, the connection in the group itself, with age differences of probably 50 years, and between the group and the actors was my highlight of the evening.

It is a fun, different, and enjoyable way to spend your evening. Considering, that food, a drink and the entry to the birthplace (which would already be £16.50 for students) are included, one gets absolutely worth one’s money.

If the Shakespeare Birthplace Trust ever puts on a show like this again, you are a Shakespeare enthusiast, and interested in experience the Bard’s life in a different way, I would recommend you doing the trip to Stratford and enjoy the evening with some of Shakespeare’s funniest characters.

You can find other exciting events on https://www.shakespeare.org.uk/visit/whats-on/museums-night/.