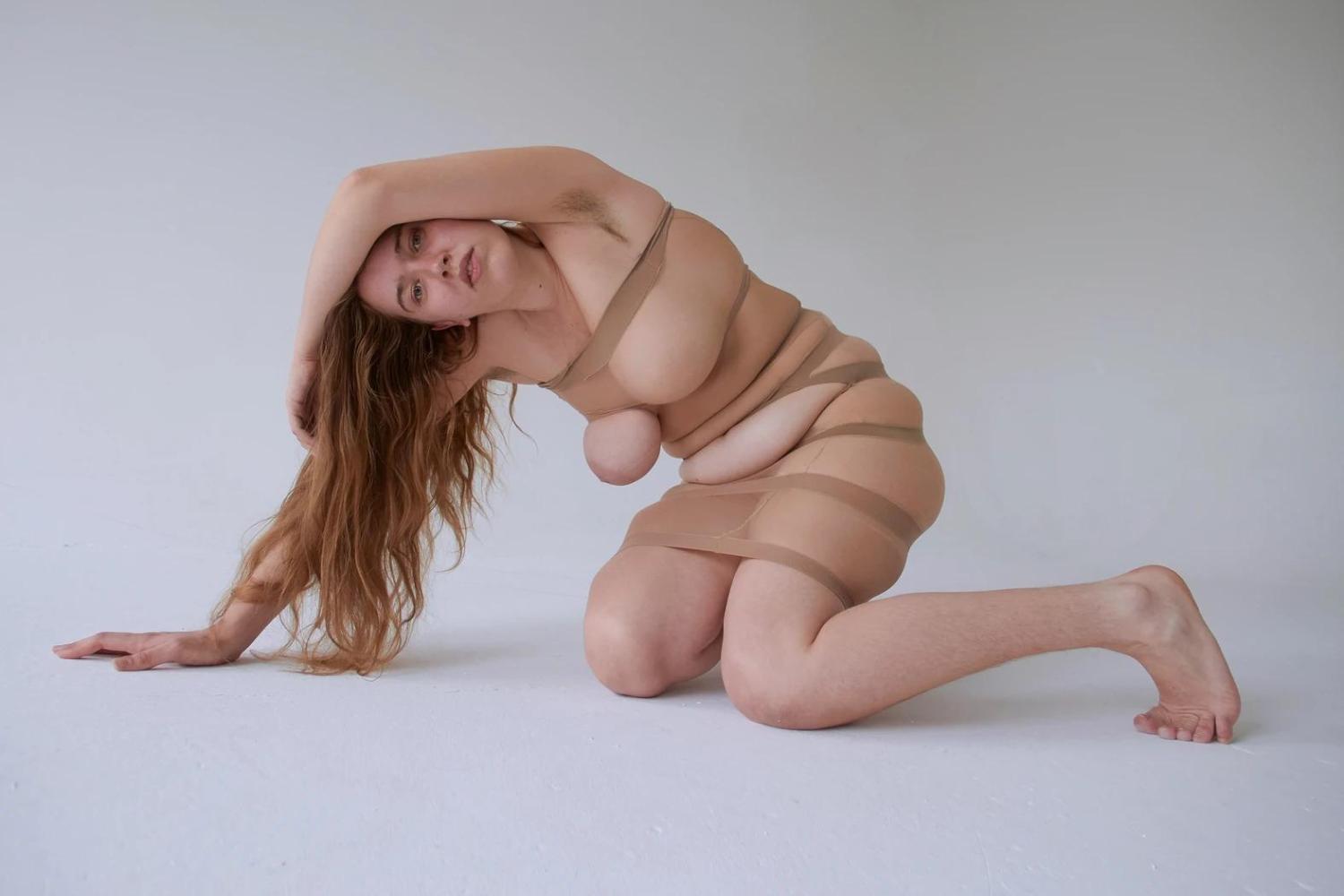 Shock and confusion, if not abject horror, are common initial reactions to Australian designer Michaela Stark’s lingerie sets. Breasts pop out between slits in bras, and ribbons are tied around the stomach to create sumptuous rolls of fat. Stark, modelling her own underwear, intentionally slouches, or contorts herself, so that we can see exactly the ways in which the fabric cuts into and divides her body; her armpits and pubic area are left unshaven.

Stark’s lingerie is not, upon immediate appraisal, or even after prolonged viewing, the most easily swallowed of clothing choices. Throwing my hands in the air and chalking it up to the esoteric realm of haute couture feels like a viable option. The lingerie however is more than an inaccessible and bizarre fashion statement; it is a challenge to a society which insists upon the perfection of the female body.

Stark’s self-modelled lingerie aims to celebrate those parts of the body which are typically considered unattractive or best left hidden. In every photo she stares out with a confident, perhaps even defiant gaze. She looks powerful and proud and unashamed of her body. In an age of social media, and thus endless comparison, this message has never been more relevant. Stark’s self-portraits urge us to redefine what we consider ‘beautiful’, ‘acceptable’ or ‘sexy’; they are the ultimate insecurity repellent.

However, not everyone can be convinced by this message of empowerment. One Twitter user commented: ‘I think we have a very different understanding of the word “celebrates”. What you describe as “celebrates” I describe as “tortures”. My body would not feel celebrated in any of those designs.’ Another sarcastically quipped ‘Looks eminently wearable and would be lovely under a bodycon dress I’m sure.’

It must be said that Stark’s designs are less than ideal in terms of everyday comfort. Strands of silk are stretched across flesh, and stomachs are encased in rings of fabric or asymmetric corsets. Stark also flung practicality out the window in her outfit for Beyoncé’s latest visual album Black is King in which, amongst many eccentric looks, the singer wows in flared jeans that puddle on the floor in a huge excess of fabric.

But, it is precisely this deviation from conventionality that makes Michaela Stark’s designs so powerful. The human body is strange, and asymmetrical and ‘disproportioned’, but it is also unstoppably beautiful. Stark’s self-portraits struggle against the insecurities born in our minds and perpetuated by a patriarchy with a money-making agenda. Seeing another woman confidently display herself in clothes intentionally designed to create rolls and unbalanced breasts is nothing short of inspiring. Even from the most unflattering angle, in the most ill-fitting lingerie and posed in a frankly awkward position, Stark’s self-portraits are works of art in praise of the human form. Stark shows that she, and her body, and our bodies, are always worthy of showing off.

Is the Victoria’s Secret Fashion Show Empowering for Women?