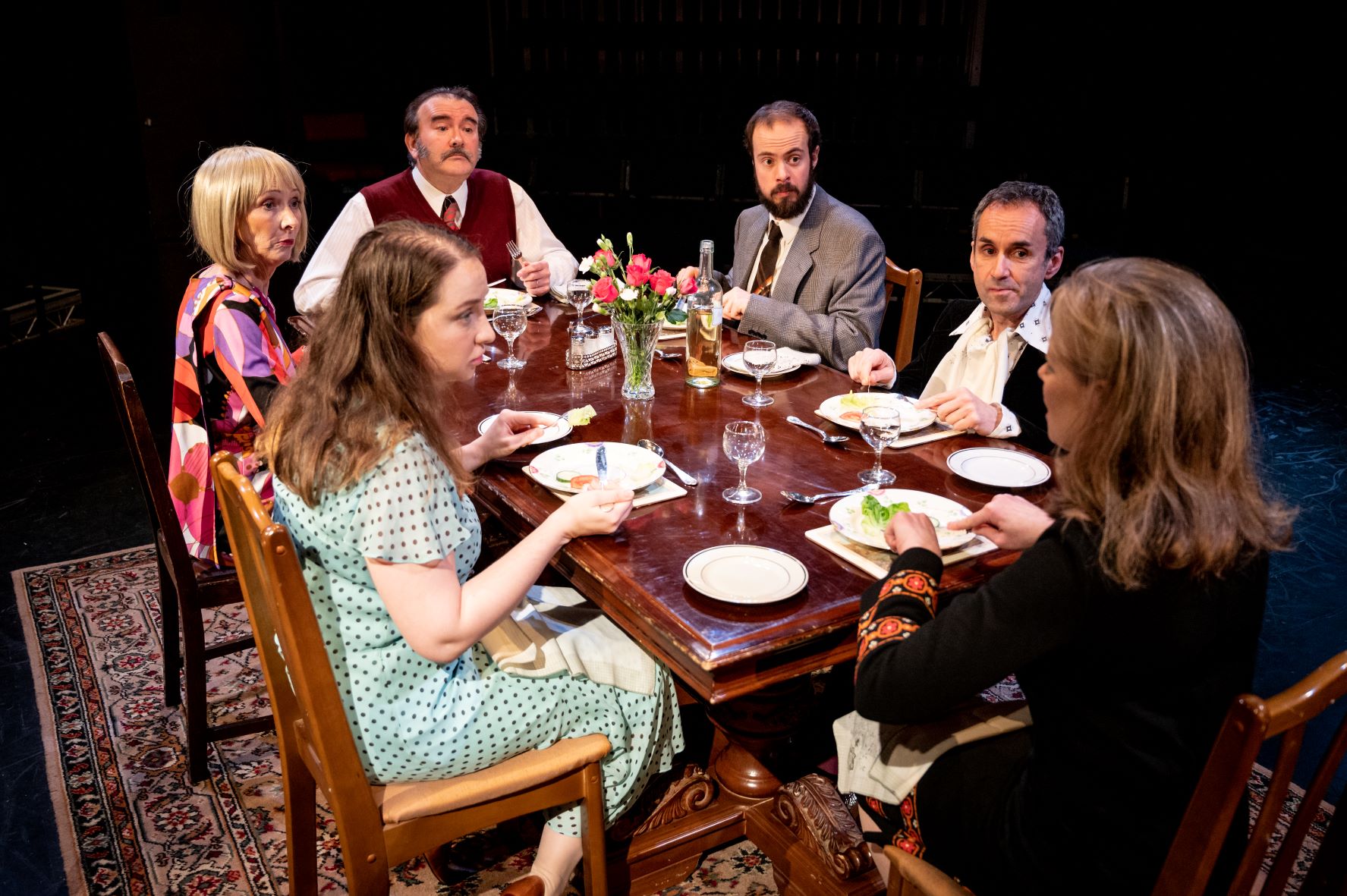 Editor-in-Chief Chelsie Henshaw and Culture Writer Phoebe Holdsworth come together to review Table Manners, a play lacking in skilful acting and narrative cohesion but held together by a fantastic 70s aesthetic

Table Manners forms part of a trilogy of plays that was first published in 1973 by playwright Alan Ayckbourn. The trilogy, named The Norman Conquests, follows the events surrounding a single weekend in the countryside. Each play presents the audience with a new insight to the drama-filled two days, showing the conversations had in one specific room in the house. This trilogy is not one that I had previously heard of, although it is an interesting concept.

The performance of Table Manners at the Crescent Theatre definitely had its positives, as well as its, unfortunately, negatives. The intimate setting provided by the studio room provided an immersive experience to the play; audience members were seated in four different corners which circled the ‘stage’ (I put stage in quotation marks as the stage was very minimal, which added to the intimacy of the whole experience). This staging rendered the play more natural, it felt like you were viewing a real-life scene, not one that was performed.

The casting, however, was slightly confusing and impeded my understanding of the plot when the performance first began. The play revolves around six different characters: Reg (who is married to Sarah and the brother of Ruth and Annie), Sarah, Ruth (married to Norman), Annie, and Tom (Annie’s supposed love interest). However, their relationships to each other were something we had to work out (since we were unfamiliar with the play). In this specific production, Annie was considerably younger than the rest of the characters which made it difficult to recognise in what way the characters related to each other. The age of Annie also made for an uncomfortable watch since several of the characters rooted for the getting together of her and Tom. The actress playing Annie seemed to be around my own age (20s), whereas the rest of the cast very much appeared to be in their 60s. How are the audience supposed to take the main conflict of the play (the issue of love) seriously with such an inappropriate casting?

Another unfortunate element was the delivery of lines. One performer forgot their lines twice, leading to one of the stage crew having to call out their lines to them, which certainly left many cringing in their seats. Whilst I appreciate that the opening night must have been nerve-wracking, I could not help but suffer from second-hand embarrassment at this mishap.

However, there were some positives to the production. The costumes, for the most part, seemed reminiscent of the 70s and how you would have expected the characters to dress. The best costumes were certainly that of Tom’s who rocked a brown jacket and flares for one evening, and a black velvet jacket the next day.

The play was also full of stereotypes, although given its setting of the 70s these can be excused. The misogynistic character of Reg was the star of the show, providing much of the entertainment. One example of this humour is when Reg states that eating Annie’s salad is like a ‘caterpillar hunt’.

Topical subjects such as mental wellbeing and the question around having children were also tackled. The presentation of Sarah and her ‘nervous troubles’ felt extremely misogynistic, although one must acknowledge this as a product of its time. However, the discussion around the expectations of women to have children was very refreshing given that the play was set 50 years ago.

Overall, if you can get over the jarring age difference between Annie and the rest of the characters, it makes for an amusing and engaging play.

Table Manners: I will mind my manners and start with the positives. For one, the costume department was amazing. The 70s aesthetic really shone through and gave this otherwise lacking play a real sense of authenticity. I particularly liked Tom’s outfits and would quite like to borrow his two piece denim ensemble- very cowboy chic.

Furthermore, the set-up of the play was ingenious. Plays are so often stunted by the need for characters to face the audience, and the placement of the audience, with people sitting in four small stands around the stage, made the table the centre piece within the crowd. This allowed the cast to interact in a truly natural way, and gave each side of the audience a slightly unique perspective.

Now on to the not so great bits. Unfortunately, this play was greatly lacking in narrative coherence and acting ability. Lines were forgotten, which threw off both the cast and audience, and characters were often too simple, and unlikeable. The play centred around a dysfunctional family, rife with affairs, loneliness and broken marriages. But the characters were so dull it was difficult to care. Rather than taking time to build up the characters, the play gave way to unpredictable shrieking fits and over drawn bits about divvying up dinner.

How could we root for Annie and Tom’s budding romance when the play failed to offer the tiniest shred of chemistry between the pair? This was a key narrative, but Tom, a character with all the charm of Sheldon Cooper, minus the wit, was impossible to like. The only redeeming characters were naughty Norman and Reg the misogynist. The ‘bad’ characters had a bit more depth, and they embodied stupid stereotypes that were easy to laugh at. Overall, Table Manners was an interesting play, with a unique staging and brilliant wardrobe. While the characters fell flat and narrative felt dull, it had enough laughs that I did enjoy it.

So, if you want a light-hearted play with all manner of 70s velvet, Table Manners might be for you.