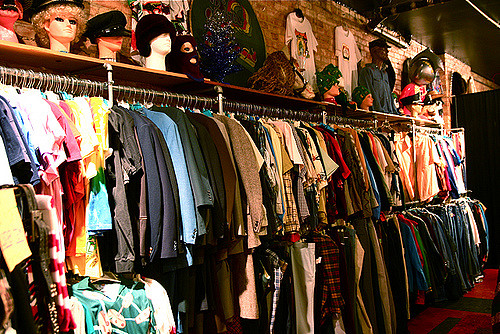 Women and ‘Dad Fashion’: The Good, The Bad and The Baggy

Life&Style Writer, Snezhina Kashukeeva discusses the rising movement of ‘dad fashion’ expressing how the form fitting trends are a thing of the past

Written by Snezhina Kashukeeva
Published at 07:00 on 6 March 2019
Images by Flickr - Steven Depolo

If you’ve walked around campus within the past week, chances are you’ve encountered the expanding movement of ‘dad fashion’ amongst women. The iconic style of oversized jumpers, coats and traditionally unappealing trainers was abandoned by fathers everywhere around the turn of the century. Luckily, it’s been lovingly adopted by the teens of our generation. It appears reflective of a demand in the market for a nostalgic recall of the 80s and 90s; the ‘vintage’ has overtaken a distinct category of its own, being incredibly sought after on online second-hand shopping websites. Whether or not you literally steal outfits from your father’s closet (which I am guilty of), the concept of the ‘dad’ is ever-present in the consciousness of the fashion world.

The masculine has been penetrating the female market for a while; ‘boyfriend jeans’ symbolised a growing favour for a wide-legged, practical fit rather than the sometimes-suffocating skinny-jean style that had previously dominated. The underlying indication is that women have begun to opt for comfort over style. Following the crop-top craze of the early 2000s, the overt sexuality of the body-con look has perhaps started to fade.

However, comfort and sexuality have been proven compatible by several influential figures, notably Kylie Jenner and Ariana Grande. The two have been known to combine the form fitting with the outrageously oversized – a staple of the latter is of course her thigh, high-heeled boots, coupled with a baggy cotton jumper. For the former it’s cycling shorts, with a large branded hoodie – often Champion or Adidas. Jenner is also noted for her connection to the Yeezy brand, which has contributed sizably to the revolutionising of female fashion. The brand’s season four simultaneously showcased the seductive and the comfortable, i.e. revealing bodysuits. A particular favourite of mine was a look comprised entirely of a muted yellow colour – an oversized ribbed sweater, no visible trousers, nude heels and the model’s comparatively tiny physique being engulfed by her puffer jacket. The clothing, though visibly loose and unrestrained, is clearly tailored to a female figure – to me, the collection is an ideal demonstration that the female clothing market can expand beyond the overtly sexual.

Thus, at the core of the movement is the act of restoration; that historically conceived as unattractive or ill-fitting is transformed to become the stylish and edgy. That is the fundamental process behind the re-emergence of the ‘dad sneaker’.

This staple of the late nineties has been essentially resurrected by high-fashion designers, being particularly catapulted into prominence by Balenciaga and the aforementioned Yeezy collection. Though the eccentric form of these chunky platformed trainers has prompted online brand Bevel to label them ‘misshapen’, unappealingly utilising ‘dirty’, ‘muted’ hues, these kitschy qualities are precisely the cause of the fashion world’s captivation with them. They were certainly one of the fastest accelerating trends of 2018, with affordable high-street retailers Pretty Little Thing and Zara curating their own cost-effective versions of the footwear. The Fila Disruptors, for instance, appear to have been purchased by every middle-class English girl in existence.

Yet, despite these incredibly expensive brands no one can afford championing ‘dad fashion’, the true reform in the lives of us normal people is in the increased popularisation of reusable fashion. To simply own a one-of-a-kind (often designer) vintage piece is becoming incredibly attractive; in the thrifting community, brand often overrides sizing. On online shopping apps Shpock and Depop – that revolve almost entirely around vintage garments – a petite girl donning a puffer four times her width is not a rare sight. This obsession has expanded to the evaporation of the taboo around charity shopping, wherein the act of physically hunting for a one-off item generates the rewarding feelings of individuality and frugality. It’s refreshing to see the steady deconstruction of fashion elitism, as well as the explosion of more unorthodox styles, that don’t necessarily conform to the boundaries of traditional sizing.

If you couldn’t tell, I’m a huge advocate of the movement. It proves that practicality and style are not dichotomous; it is certainly possible to be both, even if your fashion icon is your dad.