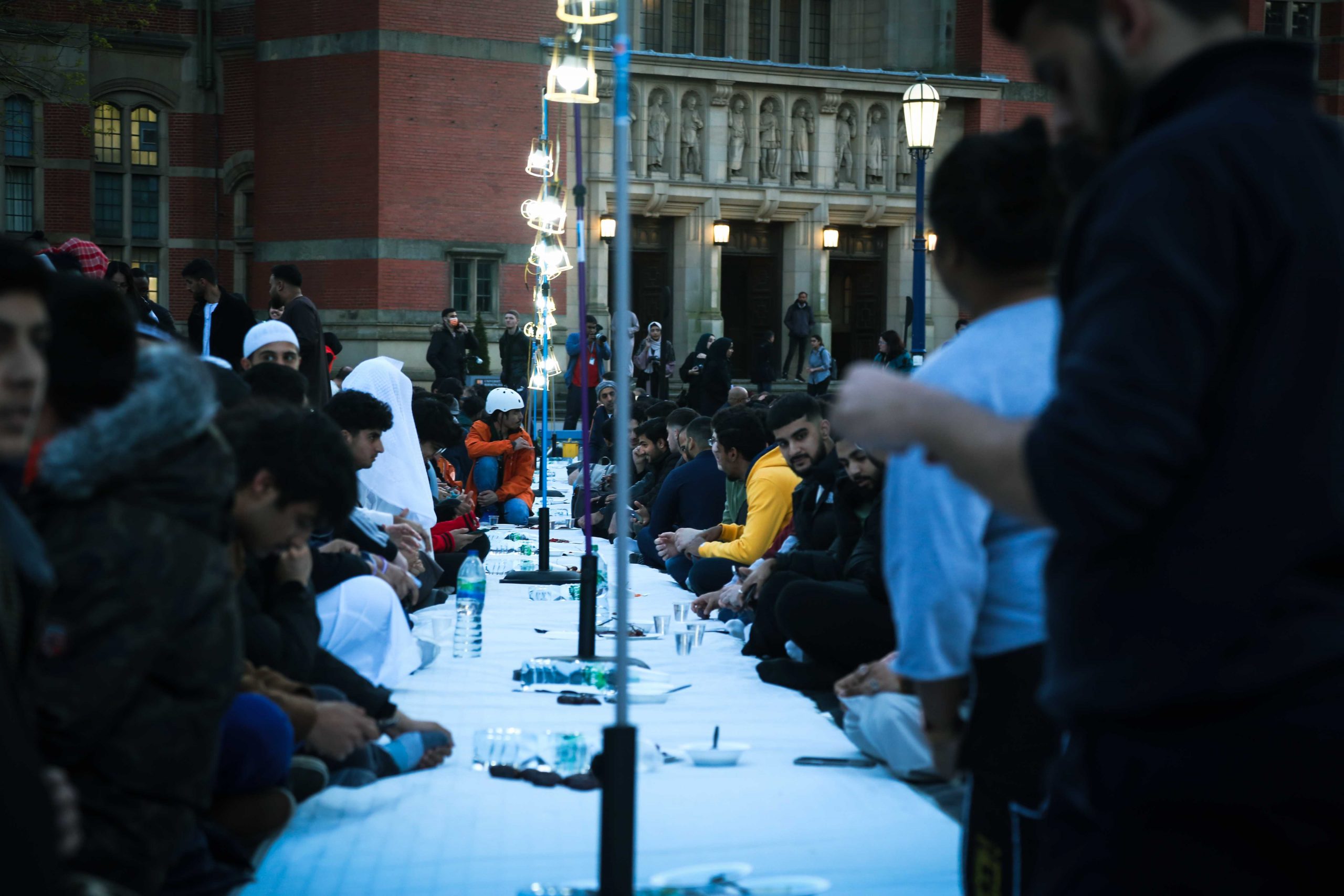 A Night at the Community Iftar

In the holy month of Ramadan, Muslims across the world will give up food and drink to develop and strengthen their spiritual connection with God; the fast is broken and the meal that follows is called Iftar. On the 29th of April UoB’s ISOC held the ‘The Community Iftar’ the largest iftar in the West Midlands with over 1700 attendees. The community iftar is an interfaith effort via a collaboration by The University of Birmingham’s ISOC’s ‘The Ramadan Project’ and the Multifaith Chaplaincy.

This was the first community Iftar to be held in three years due to Covid-19. Despite the hiatus, the community iftar came back and was larger than life; the event provided a much-needed boost to the Muslim and wider community, reviving relations after a long distressing period of lockdowns and isolations.

Attendees were encouraged to come in religious/cultural attire and the scene was a sight to behold, with rich Ghanaian prints to flowing abaayas, it was breath-taking to see a mix of different cultures come together to break the fast; a point encouraged by ISOC due to the Islamic philosophy of equality between all.

The night began in the Great Hall with an exhibition on Islamic history; the magnum opus of the exhibition being a replica of the Birmingham Quran, an artefact the university prides itself on housing. The replica showcases the remarkable preservation of surah (chapters) 18,19 and 20, the exciting point to note is that the replica shows legible Hijazi script (a collective name for early Arabic scripts that developed in the Hejaz region of the Arabian Peninsula). The radiocarbon dating of the parchment on which the text is written places the manuscript in the period between 568 and 645 with 95.4% probability- suggesting that the manuscript dates to the first century of Islam, close to the lifetime of the Prophet Muhammad P.B.U.H (about 570–632) and the rule of the first three Caliphs. The exhibition volunteers hosted talks to groups pertaining to many areas and aspects of Islam: pre- Islamic Arabia, the life of the Prophet P.B.U.H, and contributions of Islam to the world via; art, engineering, and medicine etc.

At 7:00 pm the speeches commenced, spearheaded by co-presidents Haroon Sharif and Halimah Salami; the remarkable duo spoke about the importance of faith-based events and how events such as the community Iftar are vital in bridging inter-community relations, a most notable point from the duo’s speech being “For those who haven’t fasted this month it seems an impossible task. No food and drink…/all day for thirty days. But as Muslims, we love this month! It is not just a time we get close to our families, communities and most importantly to God…/ throughout this month, we strive to improve ourselves so that we leave this month as refined, better people.”

The line-up of speakers included: Imam Adil Saleem, Mayor Andrew Street, Professor Deborah Longworth, Professor Gavin Schaffer, Jon Elsmore, Dr Rehana Parveen, Reverend Mindy Bell, Alumni Maryam Mahboob and International student Ajmain Arif. Each providing their own perspective of how Islam contributes to the community and the need for interfaith relations in these troubled times, to provide an interconnected society. After the speeches, visitors were moved to Chancellors Court where the iftar and prayers would take place.

The Adhan (call to prayer, and the signal to break the fast) recited by the muezzin (the orator of the call) was nothing short of beautiful and otherworldly. Following the adhan, the Jamaat (congregational prayer) was performed, and it was a sight to behold, with roughly 1100 congregants; men at the front and women in the back; rows of young and old, parent and child, rich and poor stood together; shoulder to shoulder foot to foot lead by the Imam (leader of the prayer). The recitation pulled heart strings and one could see time stand still; an atmosphere of peace fell upon Chancellors Court and once prayers had ended the feasting began.

Row upon rows of banqueting roll were set upon the grass of Chancellor’s Court and fairy lights were strung up to illuminate the dark- providing a fairy-tale atmosphere. Donning the armour of a high vis vest, servers raced back and forth to provide platters of vegetarian, vegan, and meat options to the guests, providing a sensational and warm service. Attendees were encouraged to bring their own Tupperware to reduce the environmental impact of single use plastic, an initiative that ISOC has been championing throughout the entirety of Ramadan with their Iftars on campus. Sounds of laughter, excitement and joy echoed throughout the night as guest enjoyed good food and company; one can easily argue that the goal of creating unity was achieved and surpassed.

The night was an amalgamation of community spirit and cohesion. One concept that we can clearly see from the night is that ISOC, under the guidance of the multifaith chaplaincy, are truly inclusive; faith or faithless, and one can only hope to attend next year.