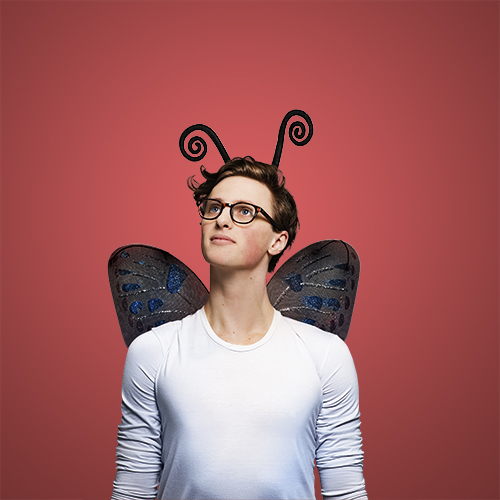 The Birmingham Comedy Festival kicked off on the 1st of October this year, and I was fortunate enough to go and watch the very funny and very posh, Max Fosh, on the debut night of his first-ever nationwide tour, Zocial Butterfly. Many may be familiar with Max already, perhaps known best for his YouTube series, ‘StreetSmart’, in which he interviews university students and the public, often asking them very thought-provoking questions whilst they are usually very drunk, or his recent stint at running for London Mayor amongst many candidates, including fellow YouTuber Niko Omilana. Being a big fan of Max, I had to go and check out the Zocial Butterfly tour.

Before Max began the show a message was projected onto the screen stating that if you could Instagram DM Max a unique talent of yours, you were in with a chance of winning £10,000 in cash. This was a segment that Max continually returned to during the show, and only added to the hilarity of the evening. There were attempts to name 30 years’ worth of Eurovision winners (in order), a gymnast, a Ron Weasley impressionist, and the naming of every single USA state from A-Z (which, not only was impressive, but successful too). Max was faced with the difficult task of choosing a talent worthy of £10,000 out of this mixed bag of hidden fortes, and ultimately, he went with the gymnast, who flipped and leapt all over the stage of Birmingham’s Glee Club. She will be taken to the final show of Max’s tour in London at the Clapham Grand, competing against a selected talent from all of Max’s other shows for the £10,000 cash prize.

Zocial Butterfly was a perfect evening if you were unfamiliar with Max’s previous work and YouTube videos, as he compiled short montages throughout the show of his videos, including his day out at a nudist camp in which he accidentally shared a little bit too much on YouTube, and his quest to find the youngest Gary in the country, after recent news emerged that the name was in fact going extinct. Max showed us a Zoom call that he had with the youngest Gary, a Zoom call that he paid a lot of money for, to speak to a three-month-old baby. This material provided a lot of laughs, and any new fans of Max’s can find solace in knowing that these jokes have accompanying videos to be found on Max’s YouTube channel.

For his debut night on his tour, Max did a superb job and finished the show by pulling off a well-executed joke that had the audience in fits of laughter. A running joke of Max’s is growing up in a posh family, being sent to a posh private school, and trying to make a living without ‘Daddy’s help’. Earlier in the show, Max revealed that the method he uses to get through posh events is to respond to people alphabetically, often coming up with random adjectives to complete his A-Z quest, (and randomly saying xylophone, for good measure). As Max was thanking the audience for coming to his first live show, we soon started catching on that he was using the A-Z method on us, and as he came to the last letters of the alphabet, he once again exclaimed ‘xylophone’, before thanking us for coming to his ‘Zocial Butterfly’ tour, clearing up any confusion as to why the tour was so aptly named ‘Zocial’, rather than ‘Social’.

Watching Max Fosh at Birmingham’s Glee Club was a great night of some well-needed comic relief, and I and the audience all had a lot of laughs. When I checked Twitter after the gig, I saw that Max was being flooded with a lot of well-deserved love for his debut night on his first tour and well wishes for the rest of the tour, which is being taken to Oxford, Newcastle, Edinburgh, and London. I am sure that the rest of the audience would agree with me when I say that we cannot wait to see what Max will do next, whether it be buying another roundabout or visiting another nudist site.