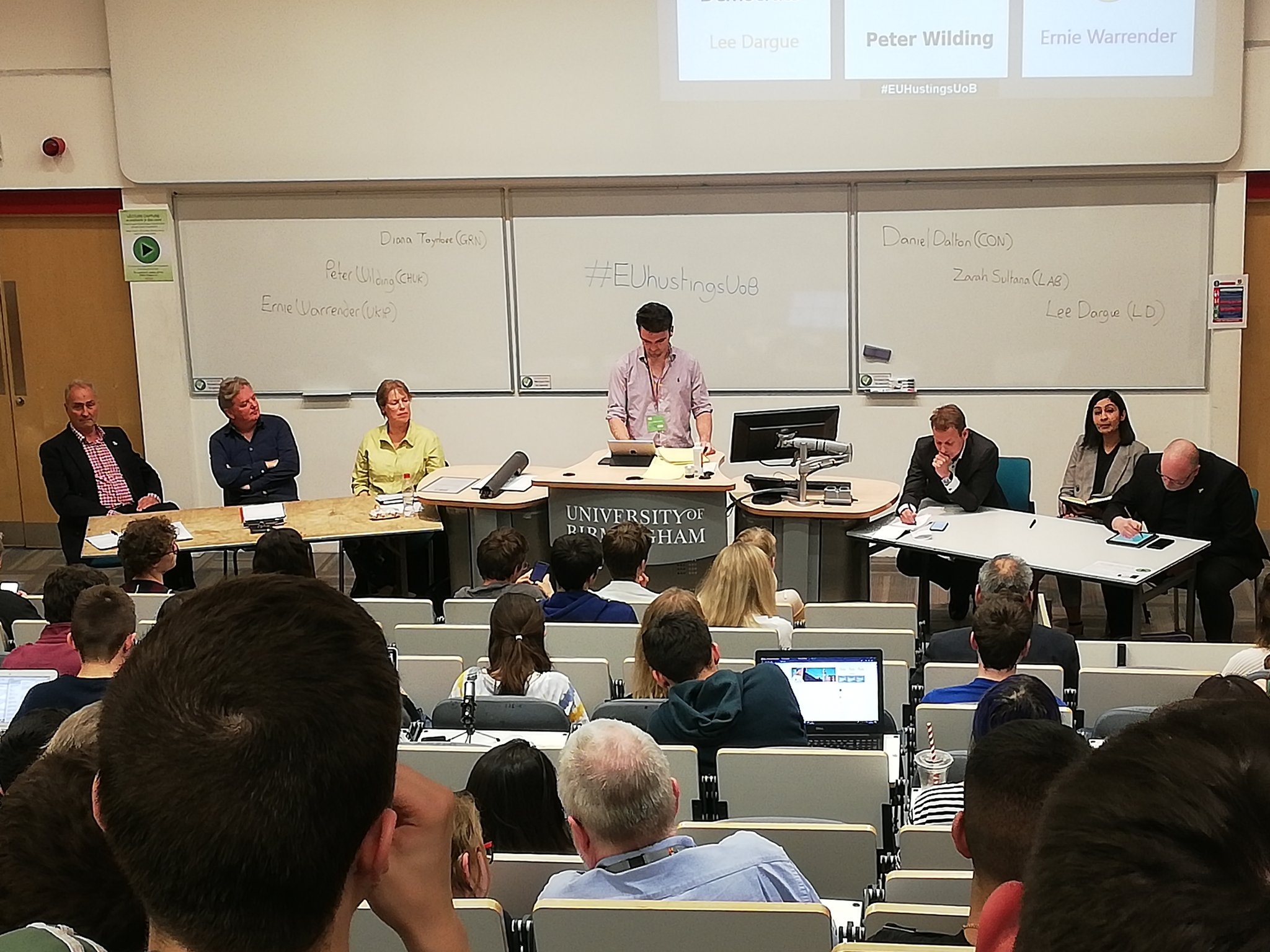 European Elections: Who Should You Vote For?

Ahead of the European Parliamentary Elections taking place on Thursday, six of the West Midlands candidates took part in a panel debate at the University of Birmingham

On Monday 20th May, the University’s political party societies organised a panel debate for the West Midlands European elections candidates. Redbrick have compiled a summary of the debate, including every candidate’s perspective on Brexit and the policies they will bring to the European Parliament if elected.

You can find your nearest polling station HERE.

The candidates have been listed alphabetically by surname in this article. The Brexit Party were invited but were unable to send a representative.

After gaining an extension on Brexit until 31st October, Theresa May’s Conservative Party will be taking part in this week’s European elections.

Daniel Dalton, a current MEP for the West Midlands, said that he wanted the UK to remain in the European Union in the run-up to the 2016 referendum.

Despite his previous desire to remain, Dalton says that the government must deliver Brexit to fulfil the wishes of the 17.4 million Brits who voted to leave.

Describing why students should vote for the Conservatives in this election, he said: ‘We are the only party that can actually deliver Brexit and deliver on that Brexit vote.’

When asked what his policies would be in the European Parliament if he is elected, Dalton said that he will make sure that EU law is tailored to suit the UK ‘for as long as we’re in the EU.’

He would also work to ‘break down’ trade barriers between the UK, the EU and the rest of the world that could become an issue as a result of Brexit.

Dalton also made it clear that, under Conservative leadership, EU citizens currently residing in the UK will be able to stay and work towards gaining British citizenship.

Dalton was the only member on the panel to have already served in European Parliament, having become an MEP in January 2015 following the death of Philip Bradbourn.

The former Warwickshire County Cricket player said that this election is important for his as he is currently an unelected MEP, which is something he wants to rectify by winning the votes of the West Midlands and continuing to represent them in Brussels.

In an interview with Redbrick in March, Sir Vince Cable said the only deal his party would support would be one that is ‘subject to a people’s vote’ in which the Liberal Democrats would ‘campaign to remain.’

This is a line that is being closely followed by Lee Dargue, who took to Twitter on Saturday to say: ‘Truth laid bare – Brexit WILL cost the economy,’ using the hashtag ‘#StopBrexit.’

Dargue maintained his anti-Brexit line in the debate, saying: ‘We are the party of remain and that’s for the benefit of everyone, not just those who voted remain.’

If elected to the European Parliament, Dargue and any other elected Liberal Democrats will work alongside other groups in the EU to work on key issues, such as environmental reform to protect future generations.

On key issues like the environment, Dargue placed an emphasis on international cooperation, saying that Britain can exert its influence on high-emissions nations more effectively as part of ‘a nation of 500 million’ in the EU.

While we are in the union, he will also work alongside other MEPs to lower the cost of medication for hospitals and healthcare across the EU.

However, Dargue admitted that ‘I don’t know what it is people want [me] to reform’ in the European Parliament, meaning he will need to learn the wishes of his constituents if he is elected to represent them fairly in Brussels.

In his concluding statement, Dargue asserted that a vote for the Liberal Democrats is a vote to stop Brexit to help the UK be part of a wider movement to tackle major global issues.

In a campaign video, Zarah Sultana said that this election presents the UK with ‘an opportunity to show the rest of Europe that we will not elect anti-migrant, racist, climate-change-denying parties and candidates to represent us.’

Former University of Birmingham student Sultana maintained that the Labour Party holds a ‘crystal clear’ policy on Brexit in which they will ‘pursue the softest of Brexits’ and campaign for a second referendum if the government cannot agree on an alternative plan.

Labour and Sultana will not pursue a pro-remain stance. They will respect the result of the referendum and Sultana says that they are currently operating to ‘bring all parties together’ to ensure an alternative Brexit plan goes through.

The Labour candidate made it evident that, if elected, she and other Labour representatives will put environmental policies high on the agenda. She said: ‘unlike the Tories, we’d ban fracking.’

In business, Sultana would campaign in the EU for large corporations to pay more tax, saying that major companies have exploited a loophole by investing in tax havens.

If she becomes an MEP, Sultana would also work to ensure that struggling communities within the UK continue to receive funding to ‘reverse the chronic underfunding’ she says have been caused by austerity measures.

Labour will also continue to fight against the privatisation of the NHS and to ensure that funding for universities continues unchallenged.

Summarising why she should be elected as an MEP for the West Midlands, Sultana described this election as an opportunity to reject austerity and, despite the UK leaving the EU, ‘not go too far away.’

It was a privilege to participate in the #EUHustingsUOB tonight & represent @UKLabour?

My time at UoB shaped my political journey so it was poetic for it to be the place of my first ever hustings.

Thank you to the societies who organised it – especially @GraceAshworthM! ❤️ pic.twitter.com/VQNuKlI24e

According to their manifesto, ‘a vote for the Green Party in these elections is a vote to remain in the EU.’ Their manifesto also pledges to continue to fight climate change and fight to ‘restore opportunities and address inequality.’

At the beginning of the debate, Toynbee pointed out that only around 50% of the audience had been eligible to vote in the 2016 referendum, saying that it was unfair that so many of the young people who will be affected by Brexit were unable to vote on it.

She also said that a decision that was made three years ago ‘should not trump what people want now.’

If elected, Toynbee says that she will continue the work of the three current Green MEPs, who she says are members of ‘the only group (in the European Parliament) that wants to take radical action’ on environmental issues.

If elected to the European Parliament, Toynbee would aim to end fossil fuel subsidies and reform the Common Agricultural Policy to introduce subsidies for farms that introduce environmentally-friendly practices.

Despite the Green Party’s manifesto policies and her remain policies, Toynbee said that she is ‘not a fan of the EU’ and emphasising the need for reform.

As part of a proposed second referendum, Toynbee said that she and the Green party ‘will listen to the people of the West Midlands to reform the EU.’

For a people’s vote, anti-austerity measures and an internationally-minded greener future, Toynbee argued that the Green Party are the right party for students to vote for in tomorrow’s elections.

UKIP’s leader, Gerard Batten, said at the launch of their manifesto that ‘UKIP doesn’t want these European elections to take place but they offer the 17.4 million leavers the chance to vote once again to leave.’

At the hustings, Warrender made it evident that he follows the line taken by his party.

In response to suggestions that leave voters in 2016 were misled or were unaware of what they were voting for, Warrender said: ‘we knew what the word “leave” meant.’

If elected to the European Parliament, Warrender told the audience that he will ensure that Britain leaves the EU ‘politely’ after negotiating with business personnel and politicians from other member states.

Warrender pointed to his business background on numerous occasions throughout the debate, highlighting that the UK is the ‘best place in the world to do business’ in an economy with ‘the lowest unemployment figures in the Eurozone.’

Audience member and other candidates did, however, point out that some British-based firms such as Jaguar Land Rover and Nissan have made significant job cuts since the referendum in June 2016.

Warrender also accepted that UKIP does not have a positive reputation amongst students and young people, having gained a reputation for being ‘populist,’ but he argued that the label could actually mean ‘giving a voice to the people.’

On environmental issues, UKIP’s lead West Midlands MEP candidate said that ‘the earth will sort itself out,’ continuing by saying that the effects the European or British government can have on the climate are limited.

To reach out to students, Warrender said that UKIP will aim to eliminate tuition fees, something he says the party has performed costings on.

He said that their costings show that it is feasible to give students ‘a debt-free future.’

This will be the first election the Independent Group will be taking part in after they were formed in February by a group of anti-Brexit, former Conservative and Labour MPs.

Heidi Allen MP, the interim leader of the group, said at a Change UK rally that they ‘demand a people’s vote so the people of the UK can say they want to remain in the EU.’

Peter Wilding made it clear that he feels it is unfair that the current generation of students will not have the same privileges that he did, such as being able to travel, study and live anywhere in the EU without the constraints that will be imposed when the UK leaves the EU.

He also said that British MPs have made a ‘laughing stock’ of the country and the Brexit process has turned the UK ‘from leaders to losers.’

Wilding expressed concerns that Brexit will result in the NHS and education services having reduced funding, as well as fears that large firms like Nissan will leave the UK if we leave the common market and the single market.

Wilding also told the audience that the UK will be less powerful outside of the EU, which is especially dangerous in a time where we are ‘surrounded by a ring of fire’ from around the world.

He cited the Trump administration, the rise of China’s economy and an increase in extremist groups in Europe as potential threats that he believes the UK would be stronger against within the EU.

Overall, Wilding believes that ‘Brexit makes this country weaker. It makes us poorer’ and that the UK needs ‘as many positive, progressive’ MEPs in the European Parliament in the instance of a remain vote to recoup our relationship with the EU.