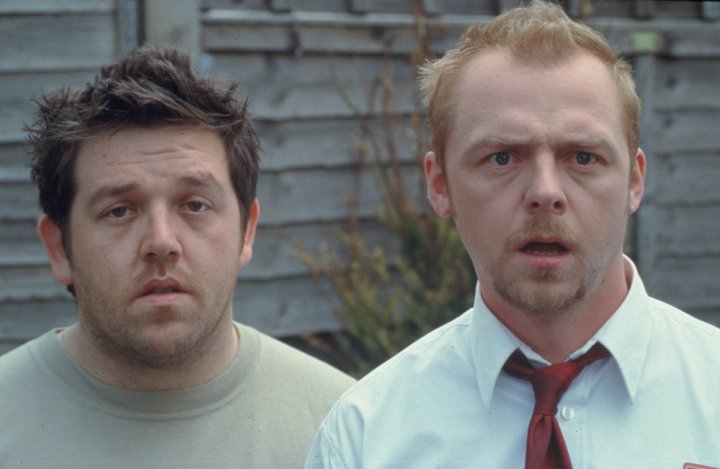 Kyle Moffat
Third year BA English and Film student and Gaming Editor.
Published at 12:30 on 15 September 2020
Images by Shaun of the Dead on Facebook , Lord of the Rings Trilogy on Facebook , 28 Days Later on Facebook

Few films blend such contrasting genres together! Edgar Wright effortlessly combines the action, comedy, and horror genres, creating a gory, intense, and hilarious experience. Zombies are used in so many ways to compliment said genres. Meanwhile Simon Pegg and Nick Frost are hilarious in their roles, providing a light-hearted approach on the zombie film. We all know that Pegg and Frost work so well together, but this is arguably their best work.

Everything in Shaun of the Dead is used effectively. Zombies are obviously at the forefront and are used in a multitude of ways. Additionally, The Winchester is a key location and even the use of a cornetto is significant when combined with The World’s End and Hot Fuzz. I am always entertained when I go back to this classic so it will always be special to me.

Ever since watching this in the cinema at eight years old, I have cherished this DreamWorks gem. Kung Fu Panda taught me about self-importance and how everyone has something unique to offer. Main character Po (voiced by Jack Black) desires to be like his idols, but only reaches his potential when using his unique attributes. Additionally, themes of faith and determination are focal points throughout which help Po to achieve greatness. Along with these important messages are comical aspects which add another layer to Po and the world around him.

Kung Fu Panda is also aesthetically pleasing. Many of the settings are so beautiful, taking heavy inspiration from Ancient China. Overall, everything feels purposeful in Kung Fu Panda. Every character has a meaningful purpose which is why the overarching messages are so effective.

All three of The Lord of the Rings films are masterpieces, but the finale just edges it for me. It concludes The Lord of the Rings trilogy in a very satisfying way with a combination of action, violence, and drama. Return of the King’s largest battles are mesmerising due to the high stakes and emotion behind them. Meanwhile our heroes are pushed to their limits, particularly Sam and Frodo. Their friendship and will are tested at several occasions and they push themselves to the end.

With over four hours of runtime, you would think Return of the King gets boring. Fortunately it does not; every scene feels like it has a purpose. I have never felt the urge to skip moments because every one of them feels appropriate and entertaining. This finale is the perfect fantasy film for me and I doubt it will be topped.

I really struggled picking just one of these successful superhero films. While I would say X-Men 2 is better, they both have played an important role in my life. They introduced me not just to the world of X-Men but also the amazing universe of superheroes.

So many of the characters are effectively played. It is thanks to this that Wolverine, Professor X, Nightcrawler and Magneto are some of my favourite superheroes. Add to this engaging action scenes and you have some of the best superheroes before the MCU. The Wolverine versus Lady Deathstrike fight particularly is so entertaining as well as the opening scene in X-Men 2. Moments like these made me believe the characters were cool and I still believe that as a result. Overall, I’m so thankful to this pair of films for introducing me to some of my favourite superheroes ever.

Danny Boyle’s depiction of a post-apocalyptic world is one of the most terrifying I have ever witnessed. 28 Days Later stands out as one of the best horror films due to its flurry of intense scenes and gritty gore. Along with this, shots of empty streets – accompanied by silence encapsulate a loss of civilisation – creating an appropriate eeriness. It truly feels like humans are near extinct.

Peaky Blinders star Cillian Murphy wonderfully plays Jim. He begins the film waking from a coma, exploring his worst nightmare. Towards the end, Jim is well-prepared to kill other people to save his friends. This simple transformation is powerful and symbolic of how the fall of civilisation transforms us. Despite its small budget and handheld cameras, 28 Days Later is a much better horror film than most blockbusters.

Looking for more Film Favourites? Check out these other articles from Redbrick Film: