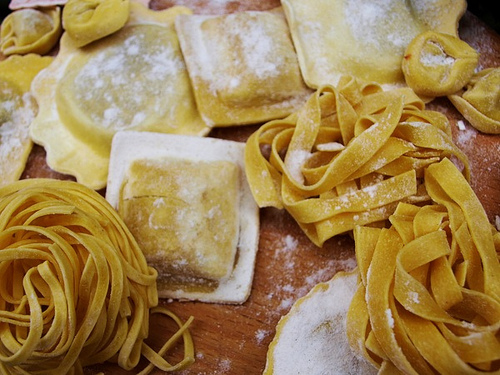 It is a common phrase when people say something is ‘the best thing since sliced bread!’ I wonder though if the mass-production of sliced bread is not all that it is made up to be. Pre-sliced bread, generally supermarket sold, is usually deemed not be as good as the fresh stuff. In order for ‘plastic’ bread (as my mum would call it) to retain such a long shelf life, the germ is removed from the wheat used and in this industrial intervention many of the nutrients, oils and flavour are removed too.

Supermarket bread tends to contain more sugar and artificial preservatives to prolong shelf life. It is without a doubt that fresh bread is probably ‘better’ and tastier due to the variety of grain used by bakeries. The lost tradition of bakeries is sad but the existing ones are targeted towards a middle-upper class market and not always budget-friendly for the student. That being said, making your own bread is always an option with the main four, staple ingredients; flour, yeast, water and salt.

As for other fresh versus dry comparisons, it wouldn’t be fair to say one thing is better than the other as they are simply different. For example, fresh pasta is quicker to cook and higher in calories and nutrients, because of the difference in how it is made- with the addition of egg although for a student it is, again, pricier. Dry pasta is just as good as fresh when cooked correctly. Due to the different ways in which these pastas are made, they’re suited to different kinds of sauces. Dry pasta is better for chunkier and thicker sauces due to its consistency. Essentially, pasta is pasta and personal preference plays a massive part upon what is deemed best.

.
Another kitchen staple for eager cooks is herbs. Most students opt for dry herbs as they are longer lasting and I would argue that this is actually better. Dried herbs are more concentrated and therefore more potent, meaning less is required when flavouring your food. They also have longer shelf-life which is much more convenient although they can still go off after about a year. Perhaps the only bonus of fresh herbs is their vibrant colour and, for lack of a better word, their freshness, in both texture and scent. Whereas most herbs from fresh to dry stay very similar in flavour, there are certain herbs such as basil and parsley which are inherently better fresh, as dried, they have a very different taste.

Although the fresh/dry debate is unsettled and very personal, there is one case study which proves the positive response to freshness: coffee. In every big city there is one coffee chain giant or another on every street corner and the reason for that is the public’s response to freshly ground coffee beans. Most households were set in their instant coffee ways since the launch of Nescafe Instant Coffee in 1938 therefore the founding of the big chains Starbucks and Costa in 1971 revolutionised the coffee world. Clearly through the mass-expansion of these companies in this lucrative market is evidence enough that a fresh taste generates interest and customers