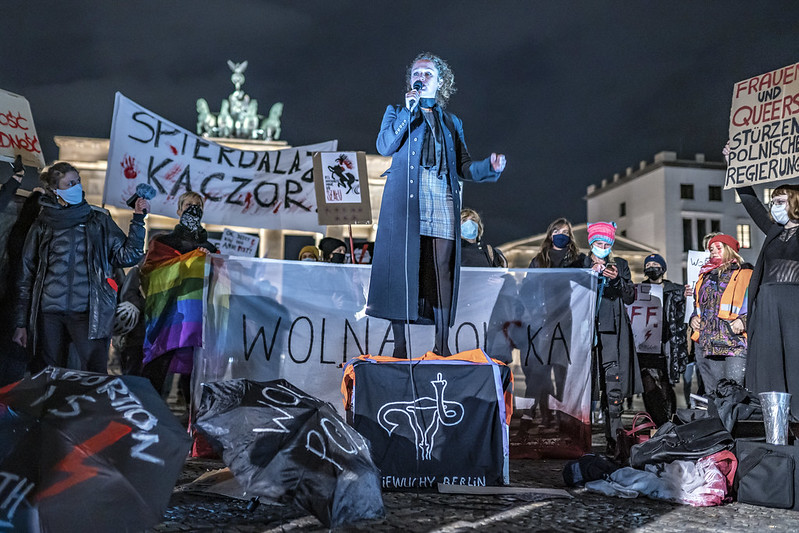 In the light of new anti-abortion laws in Idaho, Comment Writer Phoebe Snedker takes a look at recent restrictions of female reproductive rights, exploring their link to authoritarian governing

This week saw Idaho follow in Oklahoma’s footsteps by enacting the ‘heartbeat ban,’ which is a law barring most abortions at the onset of a fetal heartbeat. This can occur as early as six weeks into a pregnancy, which is striking as many people would not yet know that they are pregnant. Oklahoma has also enacted a near-total abortion ban, and Montana has banned abortion at twenty weeks, based on the scientifically disputed notion that a fetus can feel pain at this point in development. While the ‘heartbeat ban’ does allow exemptions for rape, incest, and medical emergencies, these exemptions will require extensive evidence and will only be acknowledged in cases that have been reported to a law enforcement agency or child protective services prior to the request for an abortion.

The bill is speculated to face legal challenges in light of Roe V. Wade, the 1973 Supreme Court decision legalising abortion nationwide, and presents loud and clear that the battle for the protection of women’s reproductive rights is far from over. We have already seen mass waves of anti-abortion protests and bills among Republic states in America over the past year, which coincide largely with the Trump presidency. What’s more, America is not the only country to see such bills. for example, Poland also saw a near-total abortion ban come into force at the start of this year. The question we must ask, though, is why now? Could a rise in authoritarian governments be playing a role in how women’s bodies are policed and controlled?

Last year The Guardian dubbed Poland’s abortion ban ‘a betrayal of democracy,’ and praised the rebellious nature of the protests that took place in response to the legislation. One miner’s union leader observed that ‘a state which assumes the role of ultimate arbiter of people’s consciences is heading in the direction of a totalitarian state,’ and Polish churches were defaced with graffiti by young women dressed as characters from The Handmaid’s Tale. The symbolism of The Handmaid’s Tale unfortunately does not seem too far fetched from the reality of this proposal. In enforcing such strict control over women’s bodies and reproductive rights, Poland is largely distanced from the general consensus in Europe regarding women’s rights to control their own bodies, and evokes that the influence of the Church largely overrides any concerns for women’s rights in this way.

With leading PiS figures defending groups of far-right activists in their brutal treatment of protesters, it is not unreasonable to conclude that the Polish government’s regard for democracy and women’s rights is concerningly disregarded. Mr Jaroslaw Kaczyński himself – the most powerful politician in Poland – emphasised the importance of protecting the churches ‘at any cost,’ and hyperbolically suggested that the protests in response to the abortion laws were an attempt to ‘destroy Poland and end the history of the Polish nation.’ This clear indication of more concern for the protection of the Church than women’s reproductive rights suggests that the link between right-wing, authoritarian governing and abortion-bans may be more prevalent than initially expected.

Similarly to Poland, October 2020 saw The Trump administration sign an ‘anti-abortion-declaration’ with 30 other countries, including conservative and authoritarian governments in Egypt, Uganda, Belarus, Saudi Arabia, Hungary, and many more. This Geneva Consensus Declaration focuses on ‘Promoting Women’s Health and Strengthening the Family,’ which is dictated on the title page. It seems clear to me that once again, traditional institutions are prioritised over the promotion of women’s health. This attitude seems resonant with late 20th century America, where the emphasis on heteronormativity and the nuclear family unit essentially characterized society. Whilst the Second Wave feminist movement began to see more women comfortably receiving an education and having their own careers, the idealised way of life for a woman was to marry young and well, have plenty of children and maintain the home for your husband. This way of life, whether we like to admit it or not, is still largely prevalent in the 21st century, and so abortion is seen as threatening a patriarchally structured way of life.

Point 5 in the Geneva Consensus Declaration reinforces this idea, stating that ‘the family is the natural and fundamental group unit of society and is entitled to protection by society and the State’ and that ‘women play a critical role in the family… and to the development of society.’ It would make sense, then, for authoritarian governments to enforce control over women’s reproductive health, as the existence of the heteronormative nuclear family allows the continuation of consumerism, monetary gains and stays in line with many religious beliefs surrounding sexuality, reproduction, and gender roles. I find it largely distressing to see women’s rights so easily being reversed and believe it is based on the fact that the concept of motherhood as a priority over the general wellbeing of women is widely accepted by governments across the world.

Whilst we are being encouraged to believe that President Biden’s administration has moved to support the protection of abortion rights, this is not enough to be cause for celebration. The reversal of abortion rights and control over women’s bodies indicates that women’s bodies are still considered primarily as vessels for reproduction, which in the 21st century is vile and unjust. Whilst the topic of abortion always has been controversial, and it is likely it always will be, but I feel that the ability to access abortion should no longer be considered a legal matter to be disputed, particularly by white, middle class, financially stable men who will likely never be in a position that would require them to consider having an abortion. The maintenance of the outdated, heteronormative nuclear family is not justification for such control over women’s bodies, and the time for us as a society to move past these ideals is way overdue.

The Government’s Plans to Improve Safety For Women Fall Short