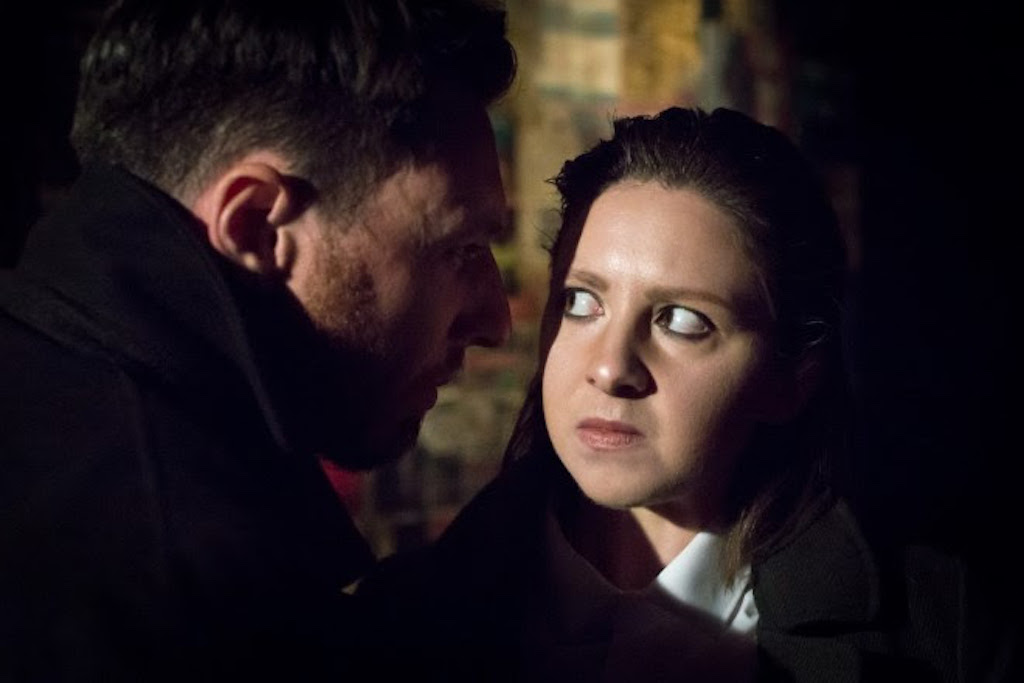 Jekyll & Hyde at the Old Rep

In our current political sphere, the idea of a corrupt figure hiding behind a seemingly virtuous exterior isn’t too difficult to imagine. Arrows and Traps Theatre Company have taken this concept and inserted it into our 21st Century world, with all of its neoliberal baggage, to create a production of ‘Jekyll & Hyde’ that is inextricably modern.

Using a fairly minimal set, consisting of a few chairs and a gauze screen, a single wall of political propaganda depicted Henry Jekyll, the former medical student, mayor and aspiring democratic presidential candidate. The play spans a few years of his life, covering his student days, time as mayor and campaign for president. Of course, this narrative is highly defined by his relationship to a charismatic man he originally meets in a crowded place: Edward Hyde. What begins as a friendship becomes infatuation, edging its way into the psychotic Jekyll-Hyde dynamic that we all know and love.

The opening scene depicts a tense conversation between brothel-owner Imogen Poole and Gabrielle Utterson, Jekyll’s Press Secretary and close friend. Low-lighting accompanies the confrontation as Gabrielle attempts to obtain information about a recent incident, in which a Mr Hyde assaulted a child, but was bailed out by none other than Mr Jekyll. Upon discovering that Jekyll was Hyde’s unexpected confidante, Gabrielle explains, ‘that man is the city’, implying that whatever scandal associated with his name would mean big trouble.

This theme of social scandal haunted the whole production, and the cast were able to portray hidden moments effectively through the use of the gauze screen. The ghoulish Hyde could appear as if from nowhere when being discussed by other characters, and the gauze was also used to depict Jekyll miming his political speeches, trapped in an endless loop of desperate crowd-pleasing. This duo formed the foundations for the production’s success, with Christopher Tester’s  Hyde as an enigmatic villain and Will Pinchin portraying a kind-hearted yet fatally weak-willed Jekyll.

With many of the scenes focusing on intense one-on-one confrontations, the show required some comic relief, which was amply provided by Gabrielle Nellis-Pain as Imogen. She was able to make scrupulous investigations appear light-hearted, and brought in modern references with ease. In general, the production’s attempt to insert allusions to current politics occasionally felt forced, with terms such as ‘Coronavirus’ and ‘global warming’ thrown in with little context. Unfortunately, it felt that the quest to be relevant to the audience came at the expense of the narrative weight.

With that being said, one modern debate that was highly effective was the discussion of gun control. With Jekyll campaigning to reduce gun crime, the production included statistics from school-shootings and footage from student campaigners. This cleverly linked to the general atmosphere of violence, dissuading the audience from romanticizing the criminal acts. With Jekyll as the most politically powerful character, this explored the idea of who gets to control gun regulations, and what moral considerations should govern their choices.

Another character who upheld a moral stance was Gabrielle Utterson, who Lucy Ioannou portrayed as intelligent and defiant, yet perhaps excessively so. Some of her lines risked verging on the unconvincing, and I felt it was her more subtle moments that were the most powerful. In contrast, Charlie Ryall as Hayley, whilst playing a more muted character, was able to deliver a sense of emotional vulnerability that felt striking.

Overall, this was a ‘Jekyll and Hyde’ that was perhaps less about Jekyll and Hyde, and more about modern society in general. A minimal set drew attention to the generally impressive acting, with digital technology effectively incorporated. I left feeling that I had witnessed something straight out of a twitter feed, such was the temporal relevance, yet it still managed to maintain theatrical flare.