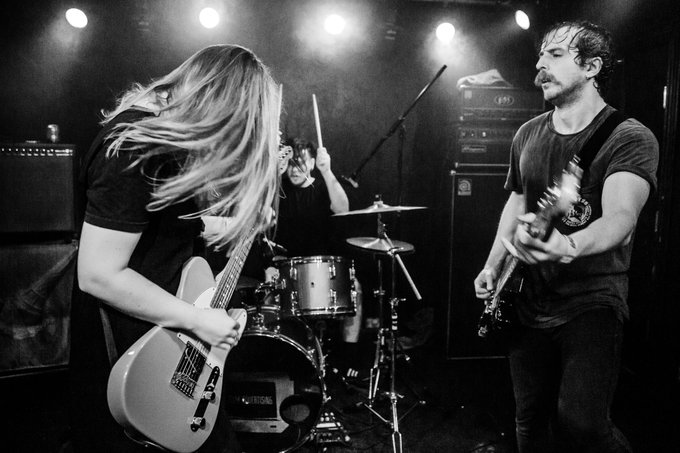 False Advertising return to Birmingham’s Sunflower Lounge for an ecstatic live show and Music Writer Tom Armstrong is nothing but impressed.

Written by Tom Armstrong
University of Birmingham student studying English Literature. From Medway, Kent. Guitarist in the student band Mind at Large.
Published at 15:30 on 22 November 2019
Images by Derek Bremner , Taken from @falseadv on Twitter

I first saw False Advertising supporting Jamie Lenman at the O2 Academy in Islington. This is a fairly sizeable venue, yet the gritty guitar tones, powerful grooves and passionate vocal performances shared between the members filled the room, commanded the crowd and left me keen to catch the next show of theirs that presented itself to me. When I learned that they were headlining a gig at The Sunflower Lounge in Birmingham – a considerably smaller venue – I made sure to go along and experience their punchy set in a far more intimate setting.

Just a few days prior, False Advertising released their brand new full length album Brainfreeze, a delightfully dynamic listen which showcases the very best of their aggressive and yet catchy and highly accessible sound; I was very happy to hear many of these new tracks performed live.

The support bands were all very impressive. Gaffa Tape Sandy put on an amazing show featuring an array of brilliantly catchy garage rock songs – they are well-worth checking out.

False Advertising kicked things off with one of the albums best singles, ‘You Said’, a satisfying choice. The immensely talented lead singer and guitarist Jen Hingley blasted forth her characteristically fuzzy guitar riffs, nailed her vocal lines with a passionate energy that got the crowd singing along, and immediately reminded me of why I’d told myself I had to see this band again. The level of both passion in Hingley’s performance sustained throughout the show. The same is true of Chris Warr, whose pounding drum grooves kept things held together tightly and accented every dynamic transition with either an appropriate burst of energy or by stripping the soundscape back and slowing things down; Josh Sellers’ performance on bass was similarly consistent, laying down a beautifully fuzzy low end to compliment Warr’s grooves.

A personal highlight was the performance of ‘Reading It Wrong’, which translated surprisingly well considering the recording’s stunning production, featuring acoustic tones and some subtle string accompaniment; the live rendition was suitably heavier yet maintained the song’s emotional core.

The show itself was a spectacle: the aggressiveness of their sound was expressed in each band member’s physicality throughout, and at around the half-way mark Hingley and Warr swapped positions so that Hingley took a turn on drums while Warr delivered lead guitar and vocals – both handling their new roles skilfully and exhibiting the incredible level of talent among the group.

Despite having a brand new album to perform, the band even performed some as-yet unreleased material, a song named ‘Need to Know’, a relatively chilled-out tune with some great melodic movements that I am excited for the band to release in the new future.

Once again I was blown away by the energy, passion and dynamism of False Advertising’s live set, remain in awe of their musical abilities, their performance expertise and am eager to catch another show whenever I can.