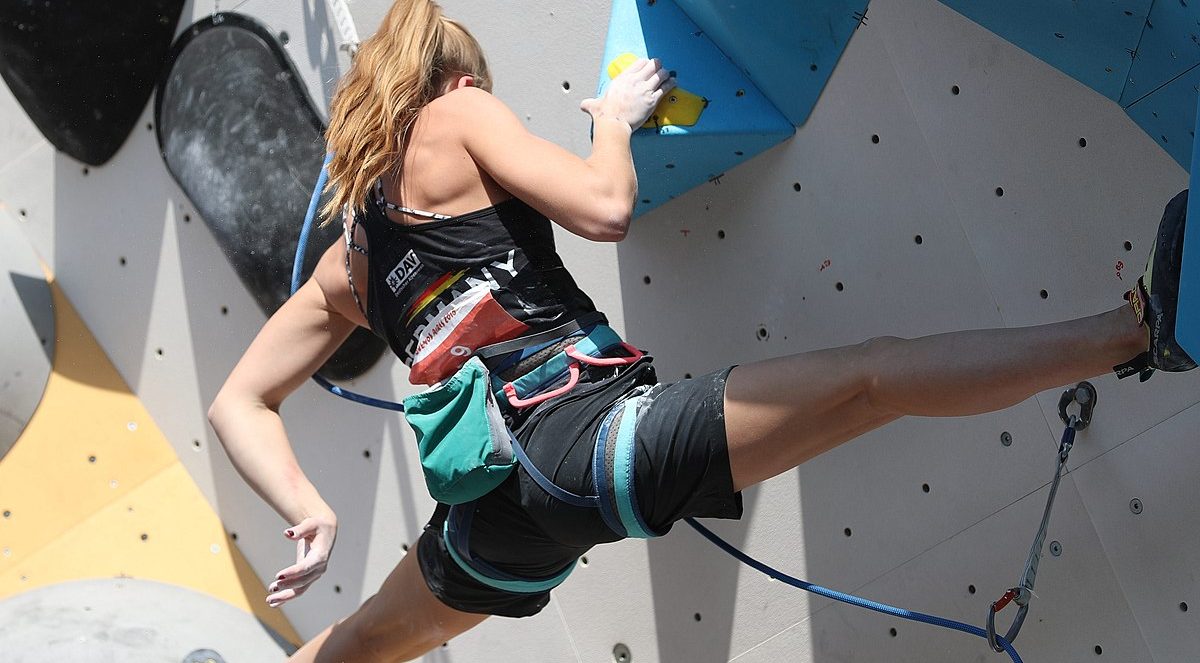 Written by Lauren Coffman
Published at 19:00 on 4 August 2021
Images by Martin Rulsch/Wikimedia Commons

The last of the new Olympic sports to take to the Tokyo stage, Sport Climbing will be taking centre stage across this week at the Aomi Urban Sports Park. The venue previously held last week’s basketball 3×3 competition and will also play host to the Paralympic 5-a-side football next month.

Beginning on Tuesday 3rd August with the men’s qualification round, and concluding on Friday 6th August with the women’s finals, Sport Climbing is an event many spectators will know very little about, but one that promises plenty of exhilarating and exciting moments not to be missed.

It is a mental sport as much as a physical one, with quick thinking and forward planning key to success across the disciplines, as well as tremendous levels of strength and coordination. The 40 registered competitors (20 men and 20 women) will use hand and foot holds of different shapes and sizes to scale a range of tricky vertical walls, with some sections of each wall positioned at positive angles (known in climbing as ‘slabs’) and some at negative angles (known as overhangs).

Climbers are split into male and female categories, with no more than two athletes from one nation permitted in each category, and must complete across three different disciplines; Speed, Bouldering and Lead.  Athletes will first compete in the qualification round, before the best eight climbers advance to the final. Their rankings for each discipline will then be multiplied together to decide who will take home Sport Climbing’s inaugural Olympic medals. There are just two gold medals up for grabs, one for each category, and the climbers will be aiming to generate the lowest combined ranking in order to walk away with one. Whilst each Sport Climbing discipline usually forms its own event, at Tokyo 2020 they have been combined into one super-event. At the next Olympics, Paris 2024, this will be expanded to two events per category, with the Bouldering and Lead disciplines remaining a joint event with Speed as a separate stand-alone event.

‘Speed’, the first of the three disciplines, sees competitors race to the top of a 15 metre wall, attempting to scale it in the fastest time. The route used will stay the same the whole way through the competition, and the athletes must hit a buzzer at the top of the wall to lock in their time. In the qualification round each climber gets two attempts at the wall, one in each lane, with their fastest time recorded. In the final however, the athletes compete directly against one another in three elimination races, with winners advancing to race other winners, in order to establish rankings. Athletes are strapped into safety ropes and if a false start occurs that climber will be immediately disqualified.

‘Bouldering’ features a much smaller wall, at 4.5m high with safety mats below it and no ropes in use. In qualification competitors have five minutes to scale each of the four boulders, whilst in the final there are only three boulders, each with a time limit of just four minutes. If climbers fall they are able to try each boulder again within the time limit, aiming to complete each one (and in the lowest amount of attempts) in order to be ranked highest in the discipline. Unlike the Speed round, the Bouldering ‘problems’ change between the qualifiers and the final, with athletes unable to practice on them beforehand, and only able to observe the routes for two minutes before the final begins.

Finally, the ‘Lead’ discipline focuses on height, with the athletes tasked with climbing as far up a 15 metre wall as they can within the allotted time of six minutes. They have one attempt to do so, and any climber who falls will see the highest point they reached before the fall recorded. If multiple athletes reach the same exact height, the one who achieves it in the fastest time will be declared the victor. Once again the route is changed between the qualifiers and the final, with each competitor only given a couple of minutes to assess the route before their run, but as with ‘Speed’, safety ropes are used.

Whilst there are no Team GB athletes in the men’s category, Shauna Coxsey MBE will compete in the Women’s Combined event as Britain’s only climbing representative in Tokyo. She is the UK’s most successful climber, most recently winning two bronze medals at the 2019 World Championships, and although her strengths predominantly lie in the bouldering discipline she has been working hard on all aspects of her climbing in preparation for Tokyo. Coxsey will face stiff competition from six-time world champion, Slovenian Janja Garnbret, whilst in the men’s category Adam Ondra of the Czech Republic, Mickael and Bassa Mawem of France and Alex Megos of Germany are some of the climbers to watch out for.

Luckily those interested will not have to stay up into the early hours to catch a glimpse of Coxsey and her fellow climbers, with the climbing scheduled to begin at 9:00 BST and end at 14:40 BST each day.