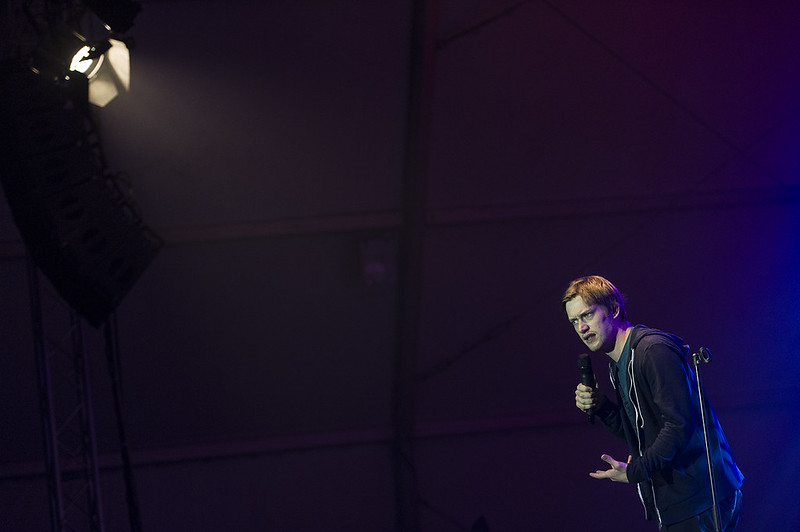 Get ready, Birmingham! This winter season, Daniel Sloss is coming to town.

That’s right, the Scottish comedian has been touring cities across Europe with his latest comedy show and he’ll be right here in Birmingham on 13th December at the O2 Academy.

For those unfamiliar with his work/unsure whether to buy a ticket, let me tell you why you should buy one for yourself, your mum, your dad, your nan and even your noisy neighbour next door.

Sloss’s comedy is brilliant and unique. He’s able to expertly walk the line between edgy and funny. His humour skirts around the offensive, but he never punches down. He doesn’t shy away from making jokes at his own expense, letting the audience laugh at him and opening them up to later laugh at themselves. His confidence and self-awareness adds to his charm, letting him get away with cheeky comments and quick quips. He encompasses his performance when he’s on stage; everything from his expressions to his voice are meticulously tailored to get the maximum impact he can from his jokes.

When you see his routine, one thing you’ll notice is you’re not hit with a barrage of jokes, one after the other, with them ultimately melting together in your brain by the end of the show. They’re not cute, fictional or strangely convenient anecdotes that he swears “really happened!”. Sloss’s style focuses more on telling stories with punchlines sprinkled in. They’re just him talking about his life. The stories are intimate and personal; they fully engross the audience as we watch and listen as he weaves the threads of the story around us.

They’re kind of like mini therapy sessions. In previous routines, he’s discussed coping with the grief of losing a loved one, recognizing an abusive relationship and talked about reaching a point in his life where he can be truly happy. There are some deeply profound moments, some moments where you may pause and question your own life. He’s even joked that his last special ended 2,500 relationships by making people realize they weren’t happy with their partners.

But his brilliance really shines when Sloss is able to pull you through an existential crisis and with a single unexpected line, and has the entire audience howling with laughter. You can trust that he’ll have the perfect quip or observation to tie the story together and lift the audience back up. His shows are performances, but they often seem a lot more personal, kind of like you’re just chatting with a friend.

If I haven’t convinced you to grab a ticket while you still can, check out his two specials on Netflix. I promise they’ll have you laughing out loud. But hurry! You definitely don’t want to miss this date.

Get your tickets for his Friday 13th December show here.