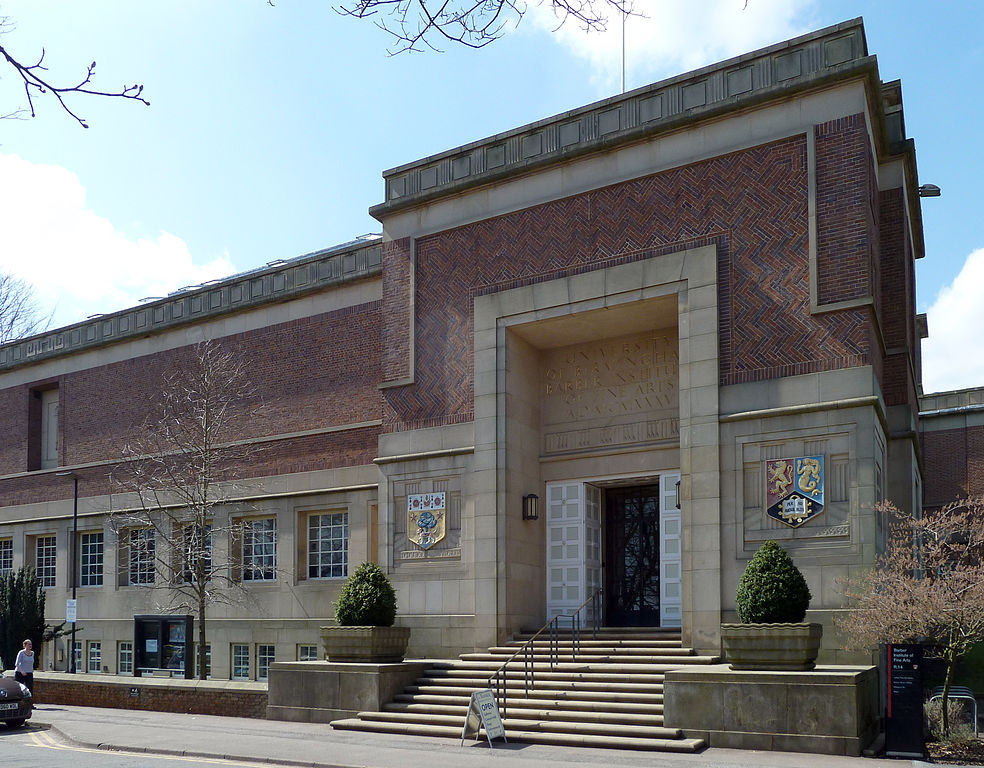 Catrin Osborne investigates the history of colonial artefacts in the Barber Institute, and comments on our responsibility to return these items to their rightful homes

Britain’s colonial history still rests in the showcases of our museums and hangs on the walls of our galleries. Plenty of artefacts owned by British institutions were unlawfully looted during colonial rule and are now at the centre of a wider national debate.

I had the opportunity to talk to Rebecca Randle, Learning & Engagement Coordinator at The Barber Institute of Fine Arts, about their approach to this contentious issue. Located on our campus, the Barber’s approach contributes to the university’s attempt to acknowledge Britain’s colonial history alongside the Decolonising Birmingham movement.

The Barber possesses one item with questionable origins. Titled An Altarpiece for the Altar of a Queen Mother it is estimated to have been made between the eighteenth and nineteenth centuries. The object originates from the Edo kingdom and is used to commemorate the achievements of an individual (the Iyoba or queen mother). It was purchased lawfully by the Henry Barber Trust in 1948 from an art collector, but the Barber is now researching its colonial origins.

Many artefacts from Benin, typically known as the ‘Benin bronzes’, were drawn from the Punitive Expedition of 1897 which saw the invasion of the kingdom of Benin by 1200 armed British soldiers. The extent of the casualties is unknown as the citizens of Benin were thrown into mass graves. During and after the attack, British forces looted or destroyed over 3000 artefacts. These were sold in auction and are now dispersed across the cities of Europe.

The Barber’s Director, Nicola Kalinsky, is one of the co-chairs for the University Museums Group which Randle explains are currently ‘watching national conversations’ in relation to repatriation. Unfortunately, the process is not as simple as the Barber simply packaging the brass altarpiece up and flying it off to Benin. Instead, the act of repatriation rests on higher political decisions.

France has kickstarted Europe’s consideration of the issue. Emmanuel Macron announced that he wanted the issue of colonial artefacts to be resolved in five years on a trip to Burkina Faso in May 2018. This led to a report by French academics, Felwine Sarr and Benedicte Savoy, which urges for a new type of cultural exchange between museums and galleries. The first step in doing this is through the returning of 26 objects from France to Benin. This has led to a ripple effect across Europe as The German Historical Museum has announced that they will return The Stone Cross, a statue taken from Gambia during colonial rule.

Yet the UK’s previous Prime Minister David Cameron stated that he didn’t believe in ‘returnism’ in 2013. Amongst the chaos of Brexit, the British government is paying less attention to this issue. However, it is suspected that the government will announce its position on this issue before the end of 2019. In the discussions surrounding repatriation, the British Museum is seen as the paragon of colonialism. This museum hosts some of the most controversial artefacts such as the Rosetta Stone and the Parthenon/Elgin Marbles. The latter were wrongfully taken by Lord Elgin, Ambassador of the Ottoman Empire, in the nineteenth century and have been at the centre of this debate for many years.

One of the arguments against returning the objects is that the European cities that hold them are tourist hubs, allowing the artefacts to be accessed by people across the globe. Jeremy Wright, Cultural Secretary for the United Kingdom, has expressed the view that museums in London allow access to the objects for all. However, we must consider the fact that many former colonies are now considered to be Less Economically Developed Countries (LEDCs) so it is unlikely that all their citizens can jet off to London to see their own cultural objects.

Another attempted justification is that European countries have better facilities to preserve the artefacts. However, Benin has created a new Benin Royal Museum in order to house its past. Moves are beginning to be made since The British Museum agreed to lend some of their 1000 Benin artefacts, drawn from The Punitive Expedition, to this museum.  Unfortunately, this will only be on a rotation so is not committing entirely to the concept of repatriation. Moreover, if the British government cares so dearly about these looted items, could they not set aside some of their foreign aid budget for supporting the heritage of countries that they tore culture from?

My childhood school trips to British institutions introduced me to Britain’s culture through art such as in the landscapes of J. M. W. Turner. The next generation of previously colonised countries equally deserves to see their cultural heritage. If Britain and other European countries continue clinging on to these objects, it severs people from their own cultural identity. If the objects cannot currently be returned, British institutions can recognise the difficulties in their collection. The V&A has held symposiums regarding the issue entitled ‘Troubling Objects’ in attempt to offer perspectives on the colonial legacy of the museum, since a lot of its development can be linked to investment from slave owners.

The Tate Britain launched an initiative to address this issue entitled ‘A Walk Through British art by Tate’s BAME Network’. Throughout the gallery, there are black signs next to certain contentious pieces of art inviting visitors to consider them from a BAME (Black, Asian and Minority Ethnic) perspective. For instance, the sign alerts to the unsettling blackface within Benjamin Robert Haydon’s Punch or May Day (1829). Similarly, The British Museum commissioned a spoken word piece by George the Poet about their Benin bronze collection. Both the Tate and The British Museum have taken a step in the right direction, but the majority of visitors are unaware of the postcolonial narrative as they exist online, separate from the actual exhibit.

Rebecca Randle discussed this approach of considering art from a new postcolonial perspective for the Barber and how to respond to ‘a troubling object with a troubling past’. Currently, the altarpiece resides in the Red Gallery. The description offered is relatively apolitical, it explains its appearance and role in society but does not mention its origins. Whilst returning it to Benin is a complex action, the Barber is working on drawing attention to the issue and colonial history behind the altarpiece. This will involve a Barber Late focusing on the object as a focal point of the interview. The Barber also invited activist Alice Procter to offer one of her ‘Uncomfortable Art Tours’ around the Barber on the 28th May. Typically, she leads groups through notable British institutions attempting to spotlight the untold history of certain exhibits and offering ‘display it like you stole it’ badges. Procter considered the Benin brass in relation to Bartolomé Esteban Murillo’s The Marriage Feast at Cana (1672) and Anthony Van Dyck’s Ecce Homo (1625-6), which hang behind it. This is because both paintings feature people of colour, represented in a negative light as servants or torturers of Jesus. It was eye-opening to consider the brass altar in the wider narrative of representation within our galleries and museums. Whilst immediate repatriation is not a possibility, Procter agreed with the Barber’s decision to engage with the Benin brass.

Furthermore, last October, UoB students collaborated with Dr Asha Rogers, Lecturer in Contemporary Postcolonial Literature, and Dzifa Benson, artist and poet for Black History Month, to discuss colonial themes in the collection. For instance, students on a Post-Colonial Cultures module responded to the people of colour in Jan Steen’s The Wrath of Ahasuerus (1671-73). Randle believes that ‘this object provides an opportunity to discuss colonialism, to learn about it and to create cultural understanding’. The Barber Collective and The Ikon Youth Programme have been working together on a project considering the British Empire through the object and Ikon’s Hew Locke Exhibition for the migrant festival. Whilst Britain’s crimes of colonialism cannot be reversed, it is vital that our cultural institutions teach our generation about them.

To continue consideration of the colonial legacy within galleries, the Barber will be hosting a Barber Late in October that will consider Decolonisation of the Collection and BAME representation.

Britain has a colonial legacy that must be recognised. Our galleries and museums can’t continue holding onto these objects and exhibiting them in a manner that ignores their tragic history. Repatriation is an ideal but for the time being it is equally important that institutions bring these artefacts to the attention of others as we can learn through them.

A Word From the Barber: Nicola Kalinsky (Director of the Barber Institute)

I’d suggest that British and other European/western museums, working together with institutions in those countries which were subjected to colonisation, should be searching for a way of re-balancing our world’s collections through dialogue. This may be achieved by repatriation for some objects and collections, however, for other objects it might be a case of acknowledging the history of the object more transparently. This would allow museums to honour that history and as well as its other qualities.  Repatriation isn’t always the deal, or even what is being asked for – although there are many instances where that is the case. It is complicated, and within the overarching narrative, I feel it is important to consider the specific situation and history of each case. Personally, I feel for the Barber to display one extremely beautiful example of Benin brass, an artefact from a great African civilisation, within the setting of our primarily European collections is an important juxtaposition. It offers the opportunity for a dialogue between different art forms, but all of the highest quality.

If you have strong opinions or are interested in the content expressed in this article, watch out for the October Barber Late and feel free to contact the Barber Institute of Fine Art if you’d like to be involved in it.