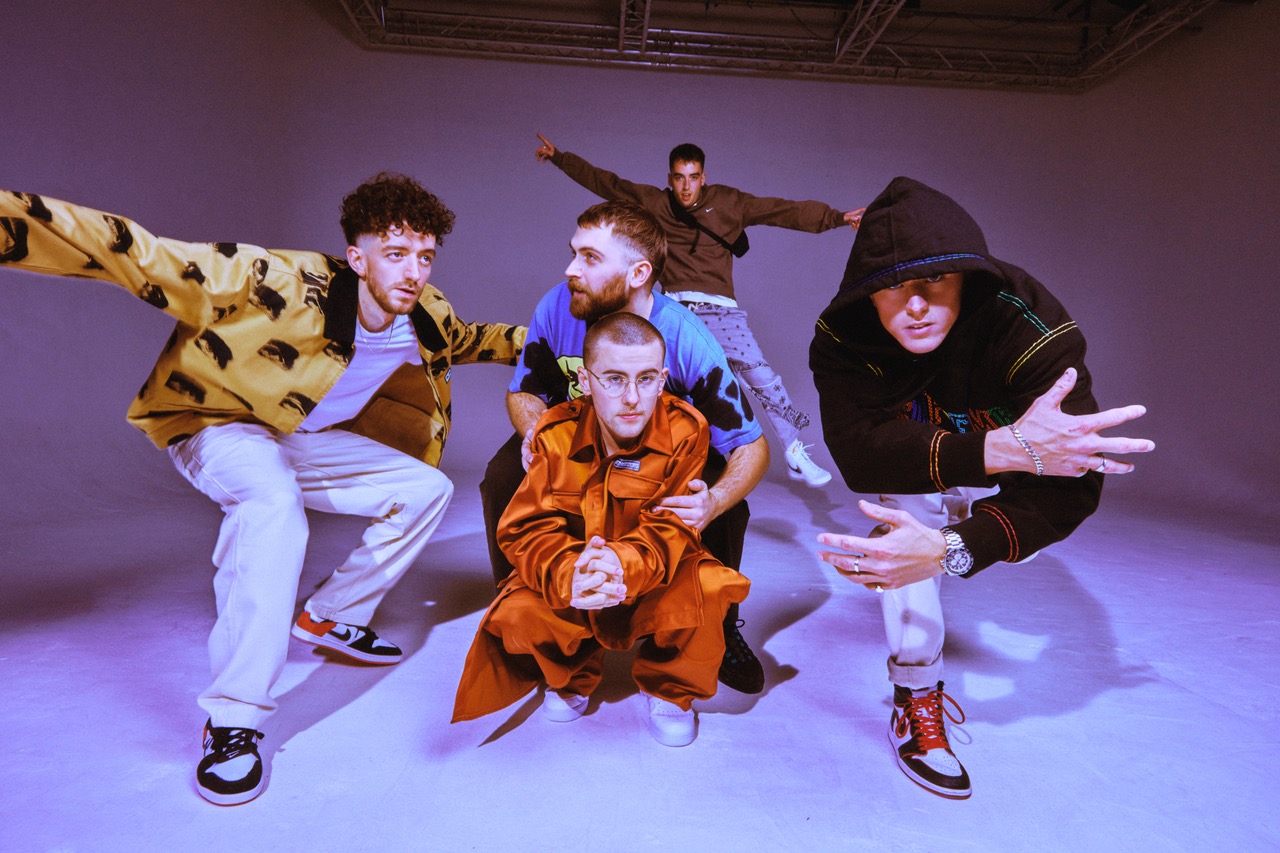 Music Critic Kelsey Baxter-Sibley chats with Murray Matravers from Easy Life about releasing their new album during a pandemic, and the cathartic process of making music

Written by Kelsey Baxter-Sibley
Published at 13:00 on 21 July 2021
Images by Courtesy of Chuff Media

Covid is a weird time to be releasing an album, has that affected how you’ve put the album together and released it at all?

Yeah, definitely. I mean Covid has literally affected everything, hasn’t it? No matter what industry you work in you’ve had to adapt. I think for us, we cancelled everything. We’ve literally had 18 months at home, which is something I’ve never had, so it’s been really nice to have that time making the album and yeah, all of our projects and EPs before have been written around touring or making videos. So it’s always been something I’ve done as a hobby on the side, and the two things have coexisted quite nicely, but with this album I just wrote music for a year straight. It’s such a lovely luxury, it’s really really nice. I really enjoyed it, but also obviously missed all the other aspects of normal life.

And do you think its changed your perspective on how you’re planning on touring the album at all?

Well, what’s really weird is that for the first time none of the songs on the album have ever been played live other than ‘Nightmares.’ And usually, we would be in the privileged position of road testing songs before we released them. We’d always be gigging, you know, like it literally felt like before lockdown I’d spent the last three years just gigging constantly, hundreds of gigs. And we’d be able to play a song and be like oh, that felt good, cool – we wouldn’t play it loads, but we’d be like ‘should we just check it, see what the vibe is with that new one?’ Which is nice. Or, on the flip side of that, you release it, and then play it that day or that night or that week and get an instant response. But Life’s A Beach hasn’t been taken on the road and probably won’t do for a long time. It’s really strange and a really weird feeling, it’s quite disconcerting really. It’s a little nerve-wracking, I guess it’s like a kind of stab in the dark, we don’t actually know if these songs are good, or like are gonna translate live I guess.

Do you think that changed how you approached writing the album at all? Would you normally adjust it more based on the reception of different songs?

I would never sort of adjust them, as such, I’d just more often than not, everything that actually made the album was something I was really excited about and was written in a couple of hours. It was all really spontaneous, every single song. Whereas I did spend a lot of time writing music, like I might spend a week on a song and be like ‘this is my magnum opus, this is amazing, I’ve spent so long writing it they’re gonna love it’ and they’ll be like, ‘it’s alright but…’ and I’d be like what the fuck? And then I’d just in reaction to that churn out another song and they’d be like ‘this is the one, this is great.’ And I guess that process was what I got into, because I couldn’t necessarily…I guess we had to just forget about the live thing really. But then there were songs that were written…like ‘Skeletons,’ we came up with the beat because we were like we want a faster song. It was purely tempo driven. We’d spent like 3 years making songs at 80 BPM like really slow, which I love – that’s my favourite type of music – but we were like ‘let’s make a fast song, because one day we’re gonna go on tour, we get to play a song that’s a bit quicker, that would be fun.’ So I still thought about live, it was still something we were longing for, but it didn’t inform the album that much.

You haven’t got any feature artists on the album at all and you’ve only collaborated with Arlo Parks in the past, but is that something you’d like to do more of in the future or would you prefer to keep it just you?

So that was like something we did intentionally. We did the Arlo Parks thing really early on in her career and our career, we were just friends so we made that song and didn’t really think about it, it was really nice. And with the first album there was opportunities to work with more of our friends but we didn’t want to. I felt, it wasn’t Covid, but the first album we wanted it to be just us, didn’t want anyone to steal our limelight I guess. It’s quite an egotistical thing thinking about it but I’m working on the second album now and it’s got loads of collaborations. So it’s definitely something I’m all for, it just felt like I guess we kind of wanted to work out what Easy Life was like in the first album, and we didn’t want anyone sort of polluting the atmosphere. Not polluting, that’s the wrong word, because they only make it better – but you know, we didn’t want it to take us off on a tangent.

The album doesn’t really fit into an easy genre and each track is quite different – is that just how you write or is it a conscious decision?

No, that really is quite frantic with the creation – I don’t ever aim in a particular direction, don’t sit down and say ‘I’m going to write a song that sounds like XYZ.’ I just don’t do that. And my taste changes loads, so, I think that’s why the album sounds why it does. I really enjoy the process of writing music, for me it’s a really cathartic and beautiful process, so it really is when the song sounds good it’s when I’ve enjoyed the process. And the process is pretty much everything for me – I like the end result, I like to listen back to the end result and be like ‘ah I remember that, I was sat there doing such and such blah blah blah,’ but the end result isn’t – I sound super hipster because the end result obviously is important because I’m trying to write songs, but I don’t think about the end result as a first point. I don’t sit down and think this songs gonna be just like this. Because you don’t know, you just have to follow your instincts with it. I guess like painting a picture or whatever, you’re going to sit there and have your subject matter in-front of you perhaps, but you might interpret that or the colours might be different or whatever that may be – you don’t know.

So the albums got quite a mixture – it involves spoken word in ‘Music To Walk Home To’, and then you’ve got the ‘Interlude’ which is quite instrumental – was that again a natural evolution of the album? Because a lot of bands might not put such variety in their debut.

Yeah, I think for us we’ve always just generally as a band tried to have fun, and be interesting to ourselves like want to get up and play the songs. For the first year we were touring we used to open the set with a song called ‘Seven Four,’ which was like in the time signature of 7/4 which is just a really ugly time signature, really off-putting and horrible, but we used to do that because it was fun for us – it was like maths, this is really hard to play but it’s a good way to start the set because everything after that is really easy. And on our first EP for example we had a song called ‘0520’ which was just an instrumental jazzy song, and we didn’t want to forget all of that. We didn’t want to get to the album and be like right now we’re a proper band and we make proper songs in proper order and it’s all very very serious. We don’t want to turn out like that because that’s not really where we’ve come from. We’ve come from it all being a bit of a joke, so I still want to have a sense of creative freedom and I guess a hint of stupidity. Genuinely it’s just a bit of a laugh really, I don’t want it to be taken too seriously. I talk about serious stuff from time to time but that doesn’t necessarily make us a serious band.

Bits of the album have quite clear messages about everyday life – you’ve got quite motivational optimism in ‘Message to Myself’ and ‘Have A Great Day,’ is that important to you? Do you have wider aims with the message you want to get across or is it just not that deep?

I don’t really know, to be honest with you. I’m always talking to myself in the songs – the ‘you’ in the songs is almost always me. Again, I’m obviously just an egomaniac! But a lot of the songs are all, I’ll sit down to write music when I’m feeling anxious or confused or melancholy, nine times out of ten. Music is like my carriage to get to a slightly brighter place, so I’m like right let’s do something that’s going to sort you out, because otherwise I’m going to sit in the house for four days and not talk to anyone, so I’m like right well lets write some music and see if that helps. Stuff like ‘Message to Myself’ really is just me talking to myself like, ‘bro you’ve got this, it’s going to be fine, sort your shit out’ and yeah, I’ve always felt that if I feel a certain way about something then obviously other people do as well, because no idea’s original, no one’s really that unique. So I feel like, people listening in on my private conversations with myself might help them deal with the conversations that they have to have with themselves. It’s not easy, is it, being sort of young and human. It’s hard to realise who and what you care about.