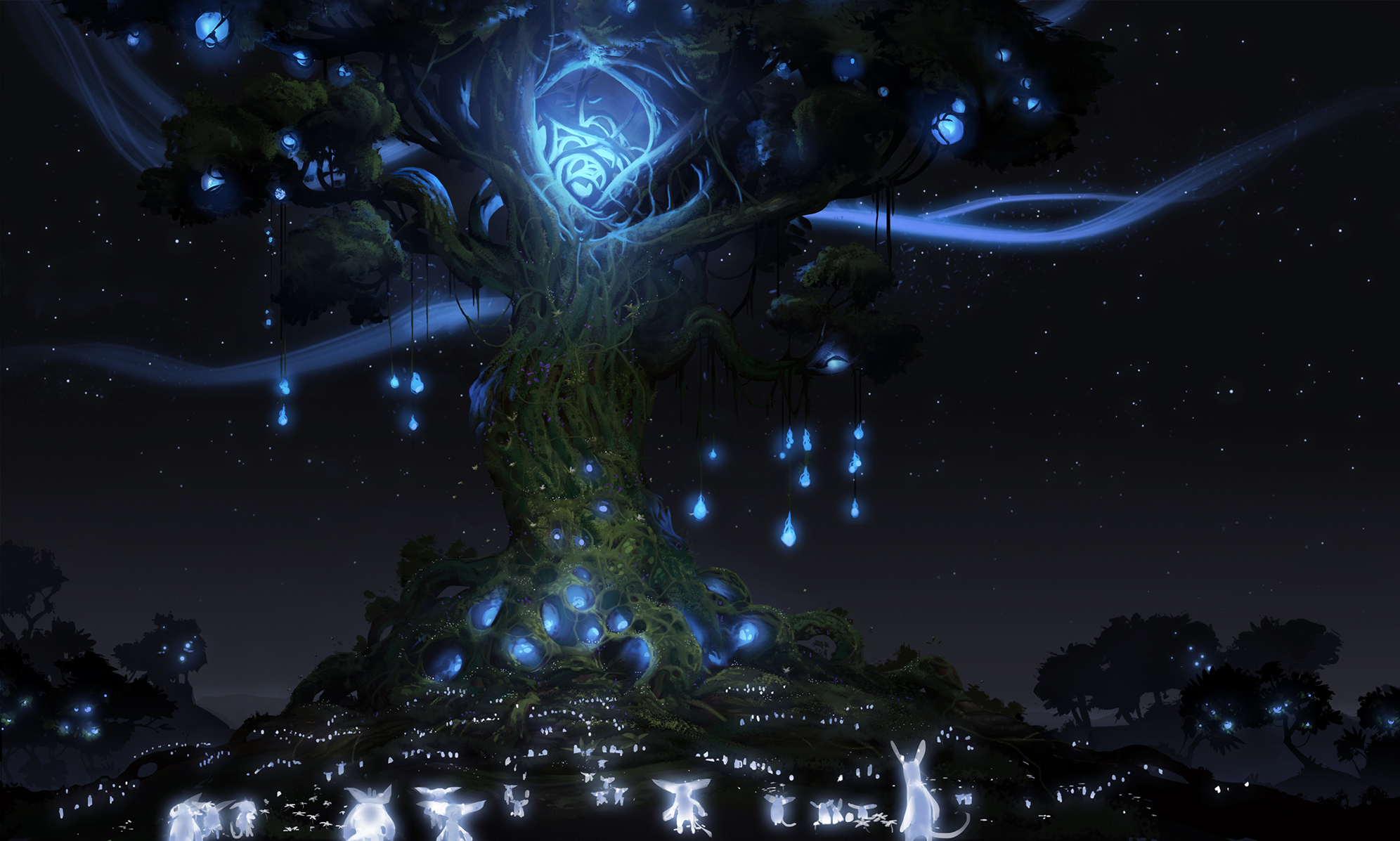 Sam Nason
Section Editor for Redbrick Gaming - currently replaying the underrated gem that is DuckTales Remastered
Published at 07:00 on 28 September 2019
Images by IGDB

Few platformers I’ve encountered have captured the charm, heart and warmth of Moon Studios’ Ori and the Blind Forest. Originally released for the XBOX One in 2015, Ori saw a recent leap to the Nintendo Switch in September of this year. Perhaps the perfect time, then, to revisit this wonderful tale of friendship and explore the glades of the Nibel Forest once again.

The first ten minutes of Ori and the Blind Forest remind me of the Pixar film UP. A beautiful, loving story is told and subsequently shattered within one, heart-breaking sequence. Ori, a white spirit who falls from the Spirit Tree one day, is raised by a creature named Naru, an affectionate and kind parent. In brief parts of this sequence one can take control of the two – the swift and eager movements of a young Ori, humbled and proud to accompany this creature; and the slow and lovingly clumsy movements of Naru, every bit of a protector for Ori as she is a mother.

The reason I compare this opening to that of UP is its strong visual connection to its consumer. We are shown lush, open autumn plains and glistening sunlight piercing the trees; a rich variety of fruit and the flourishing of nature in Nibel’s beautiful, stylised world; furthermore we see the maternal relationship between Ori and Naru grow. They play together, build bridges, eat together and – crucially – smile together. The love the two develop for each other is touching – making the following events even more distressing.

A catastrophic light fills the forest, causing Nibel to begin withering. The fall tint of the leaves turns rotten while fruits vanish; the grass curls and decays as harmful brambles begin to sprout. Nature starts to perish. Naru tries desperately but is unable to survive within the ruined forest. One night Ori brings to their cave some fruit they have managed to scavenge – but Ori is greeted by Naru, motionless, against the cave wall. This scene – and Ori’s heart wrenching moan afterwards – is haunting and full of loss.

Orphaned once more, Ori stumbles, tiptoes and crawls into the depths of the forest in the hopes of any form of salvation. This comes in the form of Sein, an orb-like spirit Ori encounters who possesses the ability to bring balance back to Nibel. Together the two must restore the three essential elements to the forest – Waters, Winds and Warmth – and reverse the death of its natural world.

Such is the story of Ori and the Blind Forest. Its designers label it a ‘coming-of-age story’ and its narrative lifts elements of The Lion King and The Iron Giant to create a tragic protagonist with a great destiny to fulfil. It is simple to follow yet packed with far more depth and compassion than one may expect from an indie platformer. As you can probably tell, it’s a tale that resonated with me greatly and, the opening especially, is one of my video game sequences of all time.

To talk so much about Ori’s story is not to discount its gameplay, however. Ori and the Blind Forest is a platformer that gives the player the massive map of Nibel to explore and traverse in the style of a 2D Metroidvania. The world is interconnected and, for the most part, free; yet certain sections may only be fully cleared or accessible once new abilities are granted from other areas. The world’s design is easy to manoeuvre yet sprawling – there are no visible load times between areas, meaning your journey is never impeded and remains constant. As diverting pathways become reachable there becomes multiple ways to get from point A to point B, showcasing the complexity of the forest and the various ways to move around it.

Ori and Sein will eventually learn to climb, dash, stomp, shoot Spirit Flames and Bursts to clear obstacles, combat enemies and traverse the forest. On top of this health shards, energy shards and ability upgrades can be gained, highlighting a sense of progression with Ori. All these factors motivate the player to explore outside the breadcrumbs the game’s main story follows and join in Ori’s adventurous sense of discovery.

Platforming around the forest is smooth and the weight of Ori is perfect. Nothing feels unfair and the game’s difficulty is dictated by its tremendous pace. This pace shines, for example, when Ori is ever granted a new ability. A simple test will first be administered to make sure the player understands how the ability works; then a small challenge will be presented to see how it can be used in a more pressurised, immediate context; before finally the player is let loose and is able to use this new skill to traverse the land how they see fit.

Such a sequence is so simple yet ensures the game never feels unfair or chaotic – players can get to grips with Ori’s abilities in a reasonable and experimentative way.  Once an area is completed the player is filled with confidence regarding their new ability. Stringing together combinations of skills in order to traverse tricky sections is immensely satisfying and encapsulates the masterful nature of Ori’s platforming.

The game’s save system is unique but intuitive. Of course traditional save locations scatter the land, but Ori can also create ‘Soul Links’ at any point in their journey, acting essentially as checkpoints. From that point on if you were to die, you would land straight at your most recent Soul Link. Ori doesn’t make you frustrated and you are encouraged to retry instantly, meaning mistakes are learnt from quickly and progress can be made to a satisfying speed – that is, if you manage your Soul Links correctly.

Soul Links are also used as a portal to upgrade Ori and Sein and purchase various upgrades to the duo’s abilities. If one has enough ability points (earned through overcoming enemies on your journey), you can invest them in one of three ability trees, with more intense and powerful upgrades being available the further up you progress. These upgrades contribute to Ori’s already impressive arsenal yet may also be bypassed to introduce an element of artificial difficulty to the experience.

Rendering at 10808p and 60 frames per second, the world of Ori is fluid and mesmerising to see. Gloomy catacombs that fill the screen with browns and purples are contrasted by the shining brilliance of Nibel’s nature and greenery. Of note is the fact that assets aren’t reused within the environment, something common – especially in indie games – nowadays. Thomas Mahler, a leading Moon Studios member, pointed to a tree, a mushroom and a rock during a demonstration of the title; ‘That’s the one and only place you’ll ever see those assets’, he said.

This smoothness is not reserved just for the world, however. The characters and enemies the player encounters throughout are all animated wonderfully and bring life to the ruined forest. Ori in particular resembles the 2D hand drawn style of the newer Rayman games, making for an incredibly smooth and visually stunning journey. The designs of the characters showcase this, proving memorable and, at times, terrifying. Naru’s design is perhaps my favourite, instantly encapsulating her warmth and tenderness towards Ori.

Ori and the Blind Forest also has one of the most wonderful game soundtracks I have heard. Each track captures the whimsy, threat and ambition of Ori’s world. Its orchestral composition is beautiful and more times then not I’ve sat in awe at what I’m listening to. In particular the soft piano, especially in the game’s first area Sunken Glades, is haunting and accompanies the strong visual presentation of the devastated forest – it encourages you to tread lightly as you set off on your quest. The motif of the Spirit Tree is also outstanding and crops up in various styles throughout your journey. As you move from one area to another songs blend one into the other, another product of the game’s seamlessness and polish.

This isn’t to say the game is perfect – while I praised the Soul Links system previously encouraging frequent and player-determined saves, certain sequences in the game where you have to escape from a threat in a limited amount of time require you to be constantly on the move, therefore denying your ability to place down these save points. These sections are normally harder and more fast-paced than those prior, requiring the player to memorise the sequence should they fail constantly. While certainly not unfair, in comparison to other platforming challenges they felt less forgiving and could occasionally border on frustrating if time had been invested into the sequence, only to die and have to begin the entire thing again. Suddenly the game became more a memory test than a platforming challenge.

With only this one immediate flaw, however, it’s clear to me that Ori and the Blind Forest borders on being a master-piece – certainly a masterclass in indie gaming. Its narrative, visual presentation and soundtrack are sensational and have stuck with me since the first time I played it. Its platforming is challenging, rewarding and hugely satisfying – if occasionally frustrating in a select few sections. With the game’s jump to the Nintendo Switch an entirely new audience awaits it. The hybrid console will prove a fantastic way to experience the forest of Nibel for the first time, and I for one cannot wait to dive into this beautiful tale once again.

Check out the trailer for the Nintendo Switch version below – and prepare for the adventure of a lifetime.