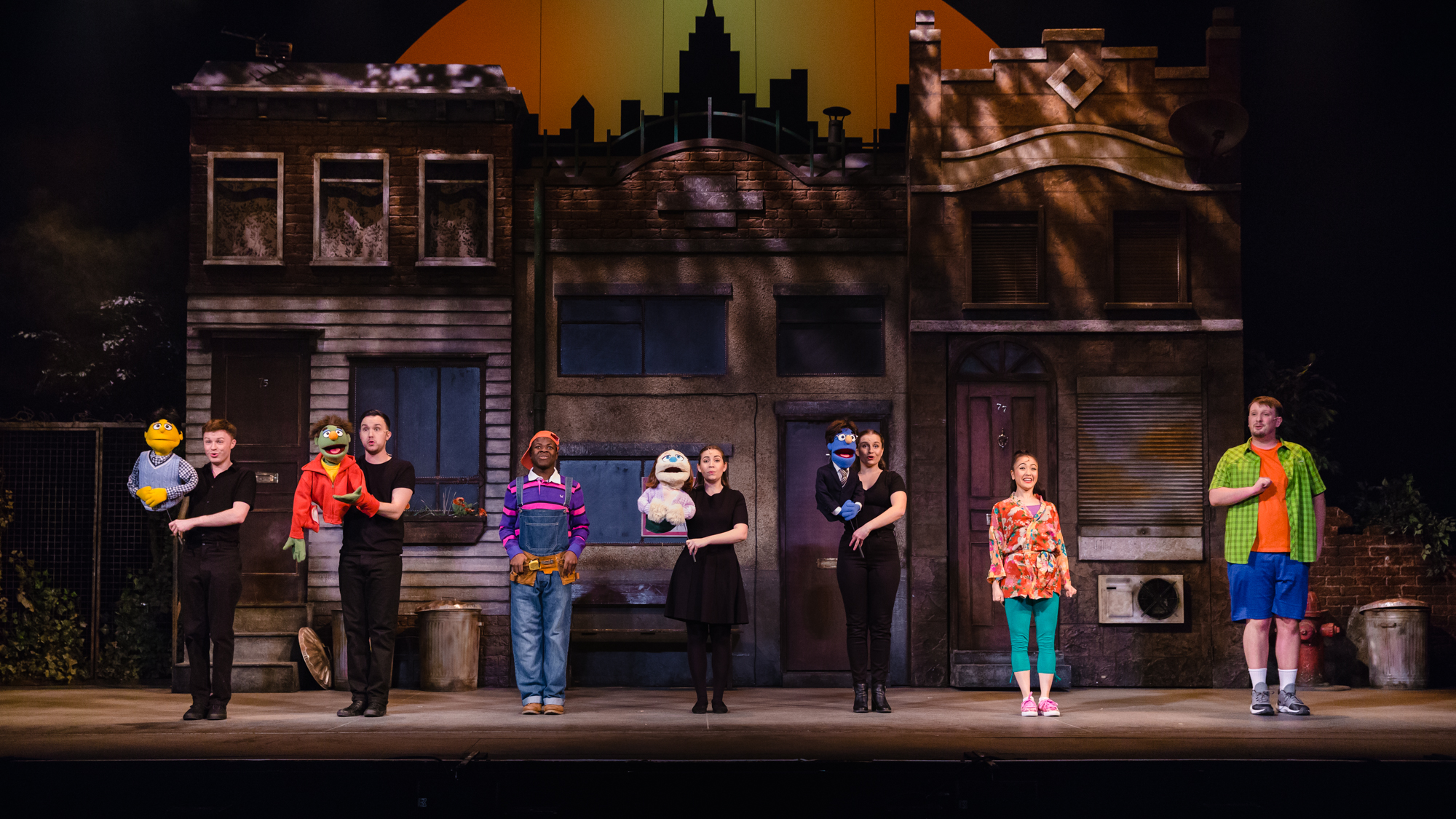 “It’s the perfect show to never take your parents to see.” So read the poster for Avenue Q, the Tony Award-winning musical currently playing at The Alexandra Theatre, Birmingham, which I saw for the first time this Tuesday. With my mum. As will become clear, I hadn’t done my research when I asked if she fancied a free ticket.

Essentially, this is a classic tale of a naïve newcomer moving into a low-rent area in New York, navigating misdirected affections, unemployment, homelessness and racial tensions. But add puppets. And an explicit sex scene. Between the puppets.

From creators Jeff Marx and Robert Lopez (Frozen, The Book of Mormon), this show is the furthest thing from a demure night at the theatre imaginable, bringing the audience to hysterics and shocked fits of guiltily complicit giggles. But proceed with caution: these puppets know how to wound. The first full-length song of the show opens with the lines “What do you do with a B.A. in English? What is my life going to be?” I am a final year English student and earlier this week I had an extremely sobering Careers meeting. Life certainly does imitate art. From here, the plot unfolds through songs such as the unforgettable ‘The Internet is for Porn’, ‘Everyone’s a Little Bit Racist’ and ‘Schadenfreude’. For all the irreverent fun of these numbers, the show reached a surprisingly powerful emotional climax in ‘There’s a Fine, Fine Line’. This is the kind of classic Broadway ballad that the cast of Glee cut their teeth on (and we’ve all shed a tear over, let’s be honest). In the midst of the show’s general hilarity, this moment of emotional insight carried beautifully by Cecily Redman’s powerful voice proved the true depth of her talents, as well as those of the show’s creators. Unfortunately, Redman’s exceptional voice highlighted the restricted opportunities for the other cast members to really shine, with no other soloist leaving a particularly memorable impression other than the general mirth of the songs.

While simple in design, the set of Avenue Q proved effective, portraying the cramped, shabby living conditions which bind the motley crew of characters, both puppet and human, together. The show’s choreography, although certainly perhaps the least obviously impressive aspect of the performance, seemed intentionally pared back, in order to highlight the slightly disorientating spectacle of puppets and humans interacting as neighbours and friends on stage. Ultimately, the puppet-human dimension added a great deal of fun to the performance, and allowed the infamous puppet sex scene to be perhaps the most absurd thing ever to have graced the stage. However, the choice of which characters were portrayed by actors and which were portrayed by puppets and puppeteers was unclear and seemed a little arbitrary, causing some distraction for the audience.

I would not at all be surprised if Avenue Q had first been conceived of at 4 in the morning after a few too many drinks, a heated, inebriated political debate, and/or an unsuccessful date, but it is this youthful energy and willingness to address the unsavoury, mundane or profane aspects of modern urban living which make it so utterly enjoyable. Escape the troubles of your B.A. in English, and allow yourself to be charmed and alarmed by this raucous show. Just maybe leave your mum at home for the night.