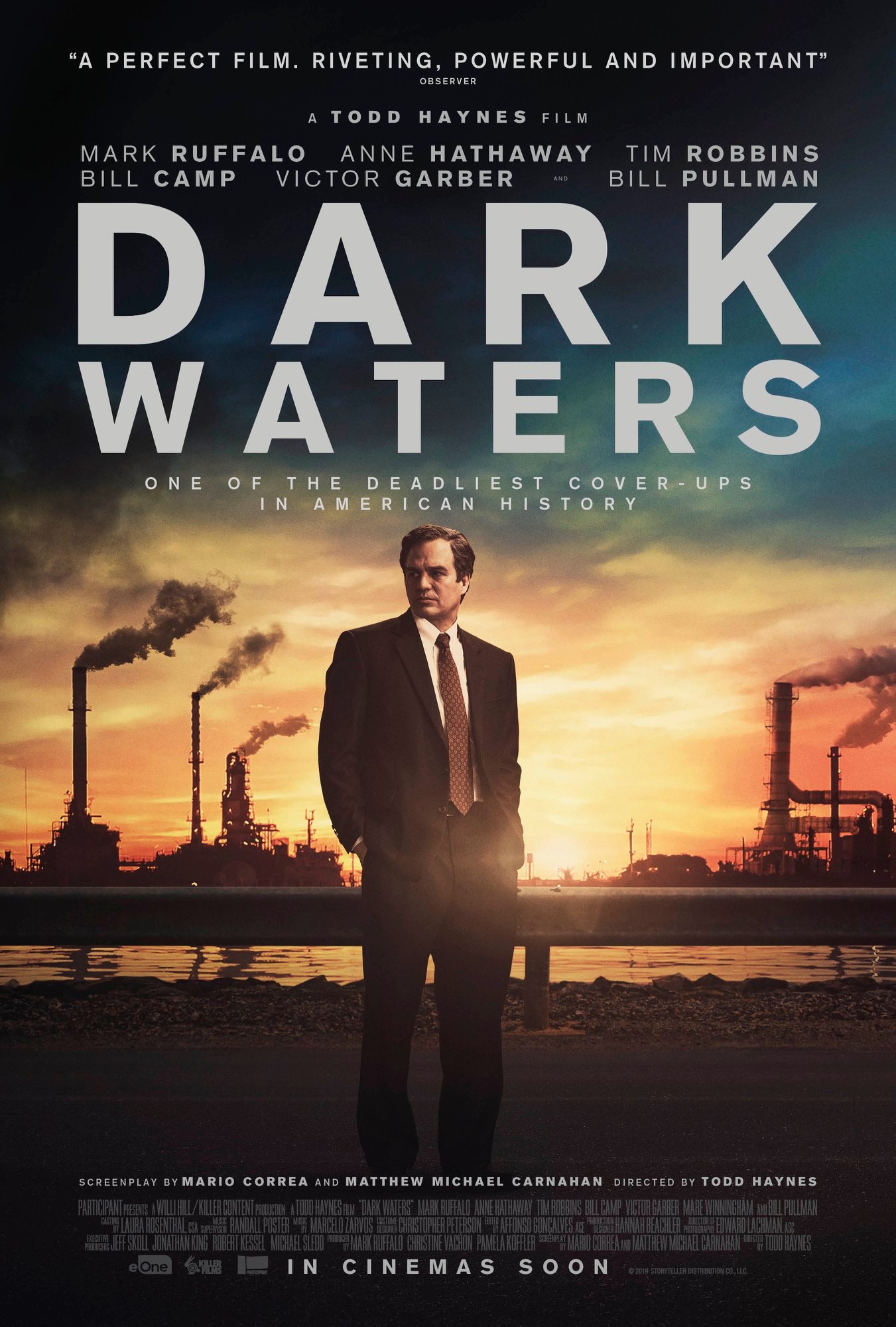 Ellie Burridge
I've watched Iron Man 3 thirteen times, so take all of my reviews with a pinch of that.
Published at 13:30 on 17 March 2020
Images by Entertainment One

Dark Waters is full of moments that feel like gut punches. The true story of a corporate defence attorney, Rob Bilott (Mark Ruffalo), who goes up against chemical company DuPont, its trailer and summary suggest a run-of-the-mill ‘issue film’. You know the type: those standard, blandly made films with a Message that are churned out by Participant Media, the studio that brought us Spotlight, Green Book, The Post and The Help. Of those, Dark Waters shares most in common with Spotlight: both are angry enough and topical enough that they aren’t restrained by the trappings of the genre – and both feature Mark Ruffalo yelling: ‘They knew!’

On the surface, Dark Waters is rather run-of-the-mill. But with director Todd Haynes behind the helm, it feels fresh, exciting, and powerful. Every shot, with its sickly green-yellow colour-grading, has a point to make. It goes beyond conveying that the town DuPont is poisoning the water supply of is sick; America is sick. Haynes’ target isn’t only DuPont; the camera often glides along roads with its lens aimed towards the jaundiced light of countless corporations’ logos. It’s a tricky dance, especially since the protagonist believes almost until the end that he can change the system from within, and that the system itself is not the problem. Bilott, who begins the film as someone obsessed with not rocking the boat, thinks of DuPont as an aberration. Haynes is able to communicate that DuPont is not substantially different from the chemical companies that Bilott’s law firm routinely defended.

Neither does Haynes (or screenwriters Mario Correa and Matthew Michael Carnahan) fall into the trap of excessively deifying Bilott. “Do you want a prize?” the farmer who first enlisted Bilott’s help (Bill Camp) yells at him after Bilott mentions how hard he’s been working on the case. The farmer has lost his livelihood and the health of himself, his family and his community to DuPont. Bilott may make sacrifices – and he does – but it will never be comparable to what an underprivileged West Virginian farmer has endured at the hands of unrestricted capitalism. Furthermore, Bilott very deliberately does not cast an imposing figure; Ruffalo plays him as a man with poor posture, hunched into himself, a man who eventually develops a tremor in his right hand as a consequence of the stress he puts himself under.

It’s not a film with a feel-good ending where the underdog wins; Haynes, Correa and Carnahan know that’s very often not how it works. Bilott simply does not have the resources to truly go to war with DuPont. There are successes littered throughout the film, but they feel hollow as the viewer watches the years tick by. We start in 1998, and even as the timelines progresses closer and closer to the present day, there is very little by way of relief: DuPont is currently worth $14.3 billion. Even the assurance that the real Rob Bilott is still fighting does little to assuage the impotent anger a film like this inspires.

However, there is value to a film as bleak as Dark Waters. There’s no ‘everything will be alright’ assurance; this is a monster movie where the monster is still alive at the end. The opening scene features teenagers splashing around in a lake, and the camera advances on them from below the water – a shot recognisable as a staple of the shark attack genre. Only, by the end of the film, we’ve come to realise that what’s in this water is far more deadly than any inhuman creature.

Dark Waters is not without its genre limitations, and it’s not the most fun night out, but it is a film that earns the label of ‘important’. It feels essential in an era where the most powerful man in America is a businessman obsessed with deregulation, who lauds unfettered capitalism; even though Haynes – like Billott – doesn’t have the power to impact what happens to American Government, his cinematic voice is indispensable.

Dark Waters is in cinemas now.

Images courtesy of Entertainment One. All rights reserved.

In the mood for some more political thrillers? Check out these other reviews on Redbrick Film: