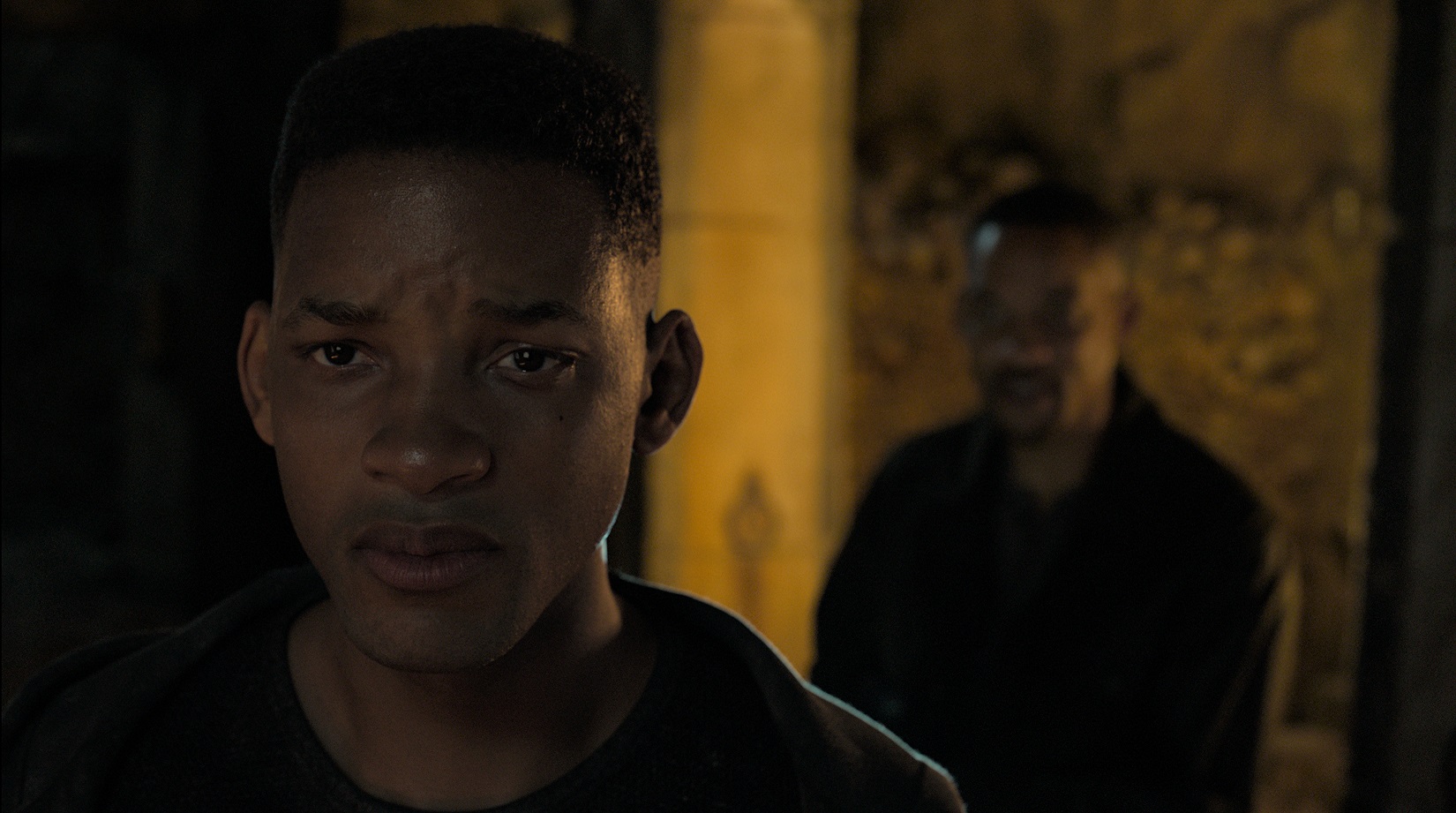 Gaming Editor Alex Green finds little to enjoy in Gemini Man, with a large quantity of Will Smiths not making up for a quality in Will Smiths

Written by Alex Green
A chemistry student, film fanatic and gamer. I tick all the geek boxes. Also loves a good waffle, whether it's the food or rambling about whatever.
Published at 14:00 on 19 November 2019
Images by Paramount Pictures

Ang Lee leads a complicated filmography. Within recognised classics like Crouching Tiger, Hidden Dragon and Brokeback Mountain lie missteps such as the oft-forgotten Hulk movie from 2003. Nevertheless, he is back for the first time since 2016 and with the freshest prince of Bel Air himself, Will Smith, to tackle a sci-fi thriller that pits Smith against his most deadly foe: his recent casting choices. I kid obviously. Will Smith is a charming leading man and his presence should lend Gemini Man credibility. In this, he plays Jimmy Brogan, an ageing assassin allergic to bees and haunted by ‘ghosts’, who is forced on the run when attacked by a mysterious assailant who is a younger, cloned version of himself. The trailers didn’t exactly paint this film in the greatest light but surprises come from little expectation.

Conceptually, Gemini Man is built on old ideas. The original idea was supposedly going to be put together in 1997 with various actors attached to the leading role as time passed. For seven years, Nicolas Cage was attached to the project, probably because of said bee allergies. Now it’s here and it feels already like a relic of the past. Although worse, Gemini Man isn’t a preserved sarcophagus full of wonder and mystery, rather a cracked, disfigured brown box with a dusty old note inside it. It’s a shame because the technical achievement of de-aging Smith here is fabulously realised, and Gemini Man does explore a large variety of locales to give it a bit of geographical flavour. But these are things we expect from our thrillers in 2019. Although to describe Gemini Man as a thriller is a complete falsification because it is simply boring.

This isn’t one person’s fault, rather a film built on poor foundations trying to scrounge together a cohesive, entertaining picture. Gemini Man boasts an accomplished director, a cast including Smith, the fantastic Mary Elizabeth Winstead and Benedict Wong. Yet none of that can save one of the worst screenplays of 2019. The script is completely flawed and actively prevents the movie from getting interesting by having less subtlety than a pack of flamingos. The opening act is 20 minutes of characters going from point A to point B to Point C back to point A just to talk nonsense. Plot holes plague the movie’s final act with characters making nonsensical decisions and with characters gaining obscene levels of skill completely unnaturally. Dialogue feels completely devoid of life and any sort of pace, making the film slow to a depressing crawl when action isn’t happening on screen. Which is quite a hefty portion of Gemini Man. Instead of a pacey, intelligent thriller with a neat sci-fi twist, we get a melodramatic, plodding story with so few surprises and complete predictability.

Part of that predictability comes down to paper-thin characters made up of tired tropes and bargain bucket characteristics. Our protagonist Jimmy Brogan talks in clichés and spends so much time talking about ghosts that you’ll think he just has an unhealthy obsession with Paranormal Activity. Smith plays him as a sullen man that would work if he felt like a realistic portrayal of a man bearing the weight of a life, but he is stuck between that and the vague ‘action movie star’ protagonist, making him feel weightless. Supporting players feel less like humans and more like plot devices with no real outstanding qualities to give them any sense of staying power. Clive Owen, a talented performer, plays a moustache-twirling villain with no moustache and no depth or intrigue.

One would hope at least the action scenes can save this sinking ship. Instead, they’re just another iceberg to pierce the hull. Parts of action sequences are contrived and stupid which is a small quibble compared to some awful CGI that makes Black Panther look like a technological marvel, pun fully intended. Characters have unnatural momentum, and as a result the viewer is taken out of the intensity the action that the film is trying so desperately to achieve. This CGI failing, along with the film having a pretty average look at most points, just makes Gemini Man feel completely soulless from a visual and technical standpoint. Even editing has a problem with the aforementioned CGI in action scenes and even dropped accents making it into the finished cut.

Ang Lee obviously had a difficult task, and with the regular pacing issues that plague Gemini Man’s 117-minute runtime, this does feel like a blemish on his resumé. That said, I don’t envy any director taking on this project that feels way out of its time, rushed out to get it made. Everything about this, except from Will Smith’s younger face, feels like something from another era. This issue dogs the entirety of Gemini Man and any director, regardless of their stature, would struggle to bring a coherent and satisfying thriller out of this idea.

Jimmy Brogan spends a large portion of this movie talking about ghosts. However, Gemini Man is more haunting for audiences than it has any idea. It’s a big miss for all involved, who should be moving on to much better projects, and best left to the graveyard and forgotten. If only Nicolas Cage had been cast, he may have given another of his unhinged performances and screamed about bees once again.

A poorly executed film with little intensity or suspense, merely a passive film full of flaws both off and on the screen.

Gemini Man is in cinemas now.