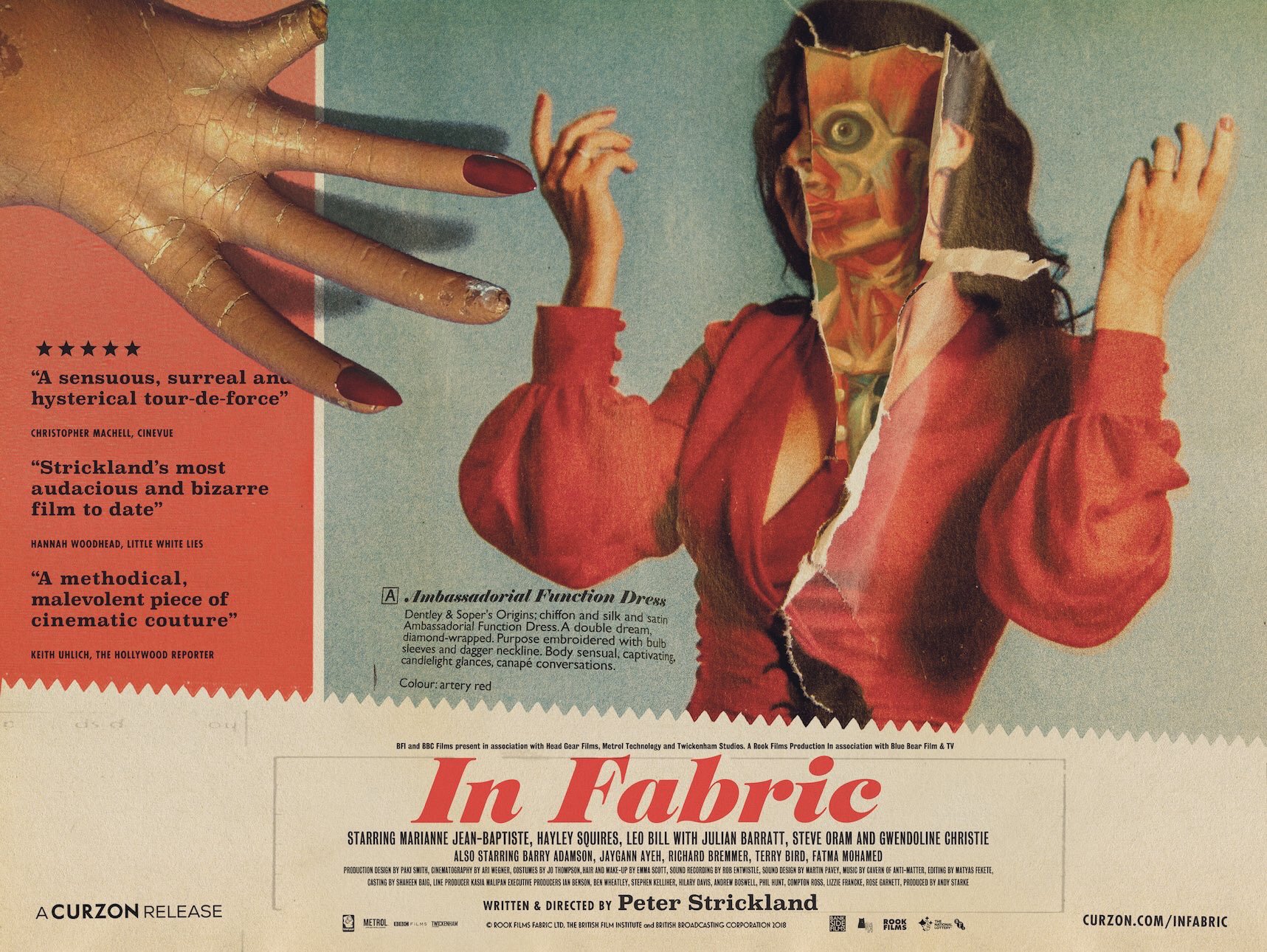 A horror film about a killer dress? Gaming Editor Alex Green unstitches Peter Strickland’s In Fabric to take a look at this topical shocker

Written by Alex Green
A chemistry student, film fanatic and gamer. I tick all the geek boxes. Also loves a good waffle, whether it's the food or rambling about whatever.
Published at 13:00 on 21 September 2019
Images by Curzon Artificial Eye

We love shopping. In the 21st Century, material possessions are so readily available and so easy to get hold of despite an ever-increasing technological advancement. People still peruse Waterstones looking for the right novel. Film lovers spend twenty minutes deciding which blu-rays to order and which is the prettiest steelbook case. However, we all spend an age finding the right clothes, browsing from a massive range of the same jeans in different sizes, agonising over the right shade of blue. But what if these possessions were more sinister, with a grander purpose? Peter Strickland has decided to ask the question as it pertains to a killer dress with his latest picture, In Fabric.

The plot admittedly sounds ridiculous. A killer dress that goes from person to person, haunting them in their sleep, causing nightmarish events and destroying washing machines with reckless abandon? Of course, this being a movie from Strickland, a director with pedigree for the genre and a love for unorthodox films, this isn’t just a movie about a dress.

Hidden within the screenplay is Strickland’s bizarre blend of tension and fear concocted in the ordinary. It’s where In Fabric shines as a horror film with an unnerving creepiness expertly created by Strickland, whose restraint is key to the film’s success as a horror. Strickland’s direction is that of a man so comfortably adept with the genre, crafting characters and scenes all designed to supplement tension and build until we see the real terrors of the film, all shown in truly brilliant detail. Images of washing machines going haywire and the final images are full of poignancy and staying power. All of this lies within Strickland’s focused, well-paced direction that beautifully allows the screenplay to shine within the solid camerawork.

The truly amazing strength of In Fabric lies within. The screenplay is full of substance as Strickland weaves comments about consumerism seamlessly throughout the picture, puns fully intended. Our personal need for goods and our dependence on them is exemplified as the film opens with advertisements for sales at Dentley and Soper’s department store. All the characters exemplify this through their shortcomings and need for satisfaction. Take Marianne Jean-Baptiste’s strong performance as Sheila. As a single mother looking for love and having a teen always at home and casual sexism at work, her desperate search for some semblance of control leads her to the dress. The dress is sold to her by a shop assistant played by the film’s best performer, Fatma Mohamed. Having worked with Strickland three other times, she is given the freedom to play a twisted character through which the horror gets a human face and a medium through which to spread. It’s a role full of discipline and plenty of dialogue that could come off as forced, yet Mohamed makes it work, turning in a creepy and mysterious performance. In addition to these characters, the screenplay also provides plenty of opportunities to look at how consumerism is a medium for businesses to exploit our needs. The word ‘sale’ appears so many times it will make your head spin. The shop assistants work like predators when it comes to the shoppers and the sinister intentions of the businesses give the film an odd edge.

These intentions are where the film somewhat gets in its own way. Occasionally the film abandons its tension, leading to a meaningful scare, in favour of just showing something shocking. A scene involving a mannequin is one that adds very little to the film’s narrative except confusion and bewilderment. In Fabric somewhat undercuts its own horror by trying to just show some horror instead of building tension the way it does and guiding us to a scare that’s both terrifying and imperative to the narrative and commentary Strickland is clearly achieving. Less of this more overt imagery would really help to add to the film’s mystery and add a further lack of clarity that could really added to the atmosphere and tension In Fabric seeks to create.

So, whilst it does sometimes let itself down a touch with a few moments that betray itself, what does In Fabric give us? Well, it provides us with a very good horror film that develops dread and gives genuine scares with even a few moments of powerful imagery and mixes in a serious conversation on our modern world’s obsession with material possessions. Add to that its strong performances and great work behind the camera and what we have is a truly different and experimental piece of cinema. This is what Peter Strickland does. Whilst In Fabric may not be to everyone’s taste, everyone should see it, purely to dissect its filmmaking and its examination of human need in a way that very few other directors would approach it from. You may find yourself looking at all your possessions a bit differently after this one.

Peter Strickland crafts a strange but intriguing film, stitching together a tight screenplay with equal parts substance and style. Not every scene truly works or pays off, but this kind of cinema feels fresh and poignant, and is a great examination of  our society’s consumerism.

In Fabric is out now on DVD and Blu-ray.