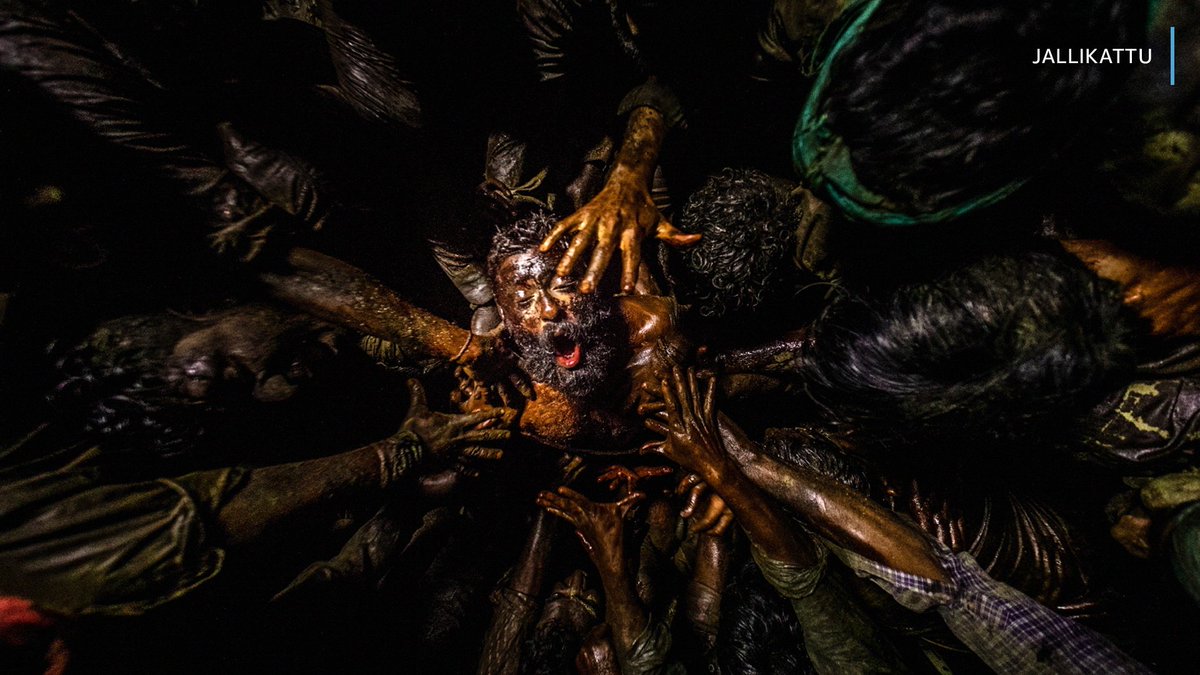 Film Editor Sam Zucca stares into the dark heart of Lijo Jose Pellijery’s Jallikattu, finding a behemoth of a horror film inside

There’s a line early on in Jallikattu, a film about the hunting of an escaped bull, that stands out amidst the chaos. When one character discovers the chase at hand, he asks ‘old man, whose bull is it?’. The old man replies simply with ‘Kalan’s,’ and the subtitles indicate that this is the God of death. It’s a striking moment, and one that begins the film’s journey from reality into surreal horror. The title, ‘Jallikattu’ refers to a traditional bull-chasing event that takes place in some southern regions of India, and although the film gestures towards the tradition, it is instead concerned with humanity’s obsession with violence.

In one interview director Lijo Jose Pellissery says that he sees the film as having only two characters, ‘one is the buffalo and the second one is the crowd.’ This may explain why the characters don’t feel fleshed out, and butcher’s assistant Antony (Antony Varghese) most closely resembles a protagonist, even if he’s far from heroic. He’s motivated by hubris just like the rest of the crowd, and the desire to catch and kill the bull not for the town’s safety, or even for its meat, but merely so he can say that he killed it. Kuttachan (Sabumon Abdusamad) is another major character, a local poacher who acts as a rival to Antony, although none of the characters necessarily have character arcs, and all of them want the same thing – to kill the bull.

The bull starts off as an absent presence, much like the shark in Steven Spielberg’s Jaws. It’s shown in brief moments to exaggerate its threat, and the film focuses more on the brewing tensions in the village as they plot to capture it. The early moments of the film are captured vibrantly with Prashant Pilai’s score of sparse percussion and vocal chants emphasising moments of tension. The editing style is sharp and rhythmic, with quick cuts on closeups and movements showing us the broiling tempers beginning to simmer. As the film progresses it diverges sharply from Jaws’s familiar narrative. The bull instead becomes an unfortunate victim whose menace is amplified by the crowd that chases it. The crowd’s reaction to the threat becomes far greater than the threat itself, and the film’s blood-curdling finale demonstrates this with over one thousand extras used in some shots – a small army hunting a single animal.

Some moments of Jallikattu feel out of place, particularly with the humour that makes it more of an awkward comedy. In one scene a man pleads to the crowd not to use foul language as it ‘pollutes the atmosphere’, and this is followed by his discovery of his herbs trampled by the bull. His reaction is a flurry of curses cartoonishly dubbed with birdsong. It’s a moment that seems odd considering Jallikattu’s darker themes, and other scenes contain more exaggerated or overstated performances in the body language or line delivery. I don’t think this compromises the film’s horror though, and in some ways, it makes the narrative’s descent into darkness more unexpected.

And Jallikattu is indeed a fantastic horror film. Cinematographer Girish Gangadharan cites Jaws, Apocalypto, Mad Max: Fury Road as inspirations for its visual style. The focus on practical in-camera effects is admirable too, with an animatronic being used for the bull with CGI used sparsely, and I didn’t notice the animatronic at all in my viewing. As I mentioned before, the film does follow the template of Jaws’s shark-hunt narrative, but as it develops Jallikattu becomes more like Werner Herzog’s Aguirre, Wrath of God, particularly with its focus on the madness and desperation of its characters. The finale is a crescendo of violence, with the screen full of fire, mud, and blood. It’s far from being a film about heroism or protection or survival, instead looking at the darker areas of the human soul and the yearning for violence deep within it.

Although Jallikattu has now missed out on making the nominations for the Best Foreign Language Film at the Oscars, it remains one of the most exciting films of the year, and one of the most original. As a simple concept it is executed terrifically and the more you watch the more, you’ll find yourself being drawn into the heart of this dark tale.

Looking for more thriller or horror films? Check out these reviews on Redbrick Film: