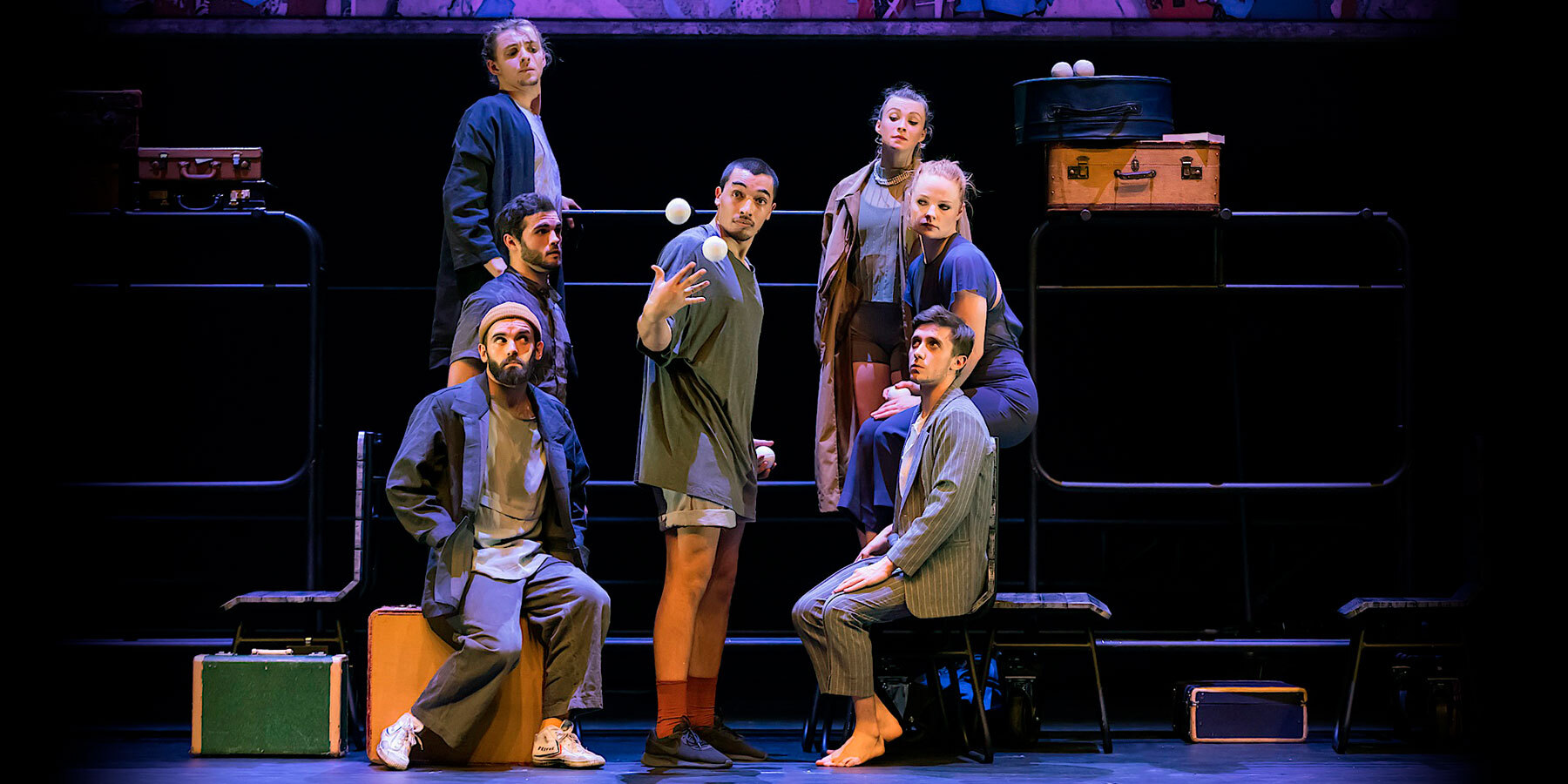 The Seven Fingers came to the Birmingham Hippodrome for the UK premiere of their show, Passagers, on Tuesday night (21st September.) Passagers was a beautiful showcase of the artistry of physical theatre combined with dance and circus and aimed to change the way we think of circus for good.

The message communicated through the show was deep and somewhat eerie at times (the synchronised heavy breathing of performers at the start of the show helped send it in this direction from the offset) but was also thought-provoking and refreshing. It followed the journey of eight people travelling by train, all with a different story to tell; some were devastated to be leaving family and friends behind whilst some were looking forward to going somewhere new. None of them knew each other yet they were all connected by travelling on the same train. It makes you curious – where people have been, where they are going, what made them travel at that same exact moment in time as you? This original idea allows the audience to sit back and simply watch the lives of those on stage overlap and unfold in extraordinary ways. The message of the show was extremely fitting with its title in this sense; the audience could watch the lives of those on stage pass by.

The Seven Fingers prove that a circus does not have to involve clowns or novelty tricks and instead can make magic in a different form. No quick-change acts were needed – in fact, if they were included it would have completely ruined the show’s beauty. Instead, silk and hoop work, juggling and dangerous flips were performed (sliding down a pole with the performer’s head being inches away from the floor created a unanimous shocked reaction from the audience.) One of the performers, Maude, was sensational, hula hooping multiple hoops at a time – a skill that definitely seemed out-of-this-world. The talent these performers showcased often seemed beyond human capability yet the performers defied all odds to deliver an emotional and touching journey that defied both time and gravity.

Stunts were not just done for the sake of it; they were carefully and cleverly integrated into the story. One example is to be found when the passengers on the train would all do something in a chain reaction from each other. A sneeze would follow an ‘excuse me’, followed by a throw of a juggling baton. This was a lovely added touch that helped pick up the pace of the performance so that it really did feel like the performers were on an actual train journey.

The beauty of the show was that it did not need lots of dialogue; there were occasional speeches or a one-off song that made its way onto the stage but that was more than enough. The dance and death-defying acts told a story, or multiple stories, all on their own. The beauty of the art is that it is open to interpretation and therefore it was lovely to see The Seven Fingers appreciate this and offer as little explanation to the performance as possible.

With the show continuing on its UK tour, it is a must-see for anybody who loves dance or circus. The synchronisation of performers must be applauded; it was clear that the performers were risking their lives to deliver the audience a show to remember and it certainly paid off.

Book Wormhole: Salt to the Sea