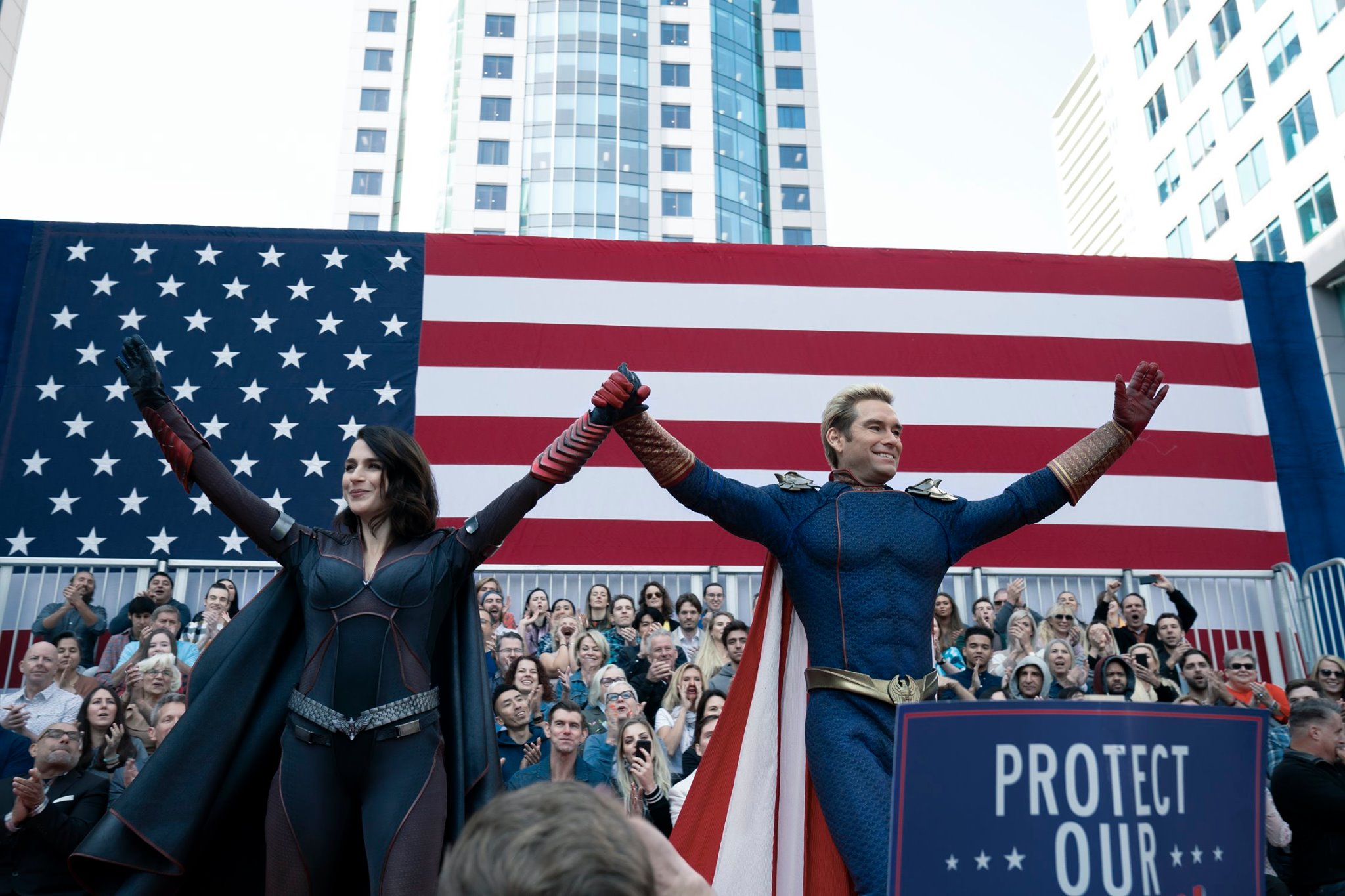 Written by Antonio Miguel Aguila
Final year English student obsessed with books and cinema
Published at 11:00 on 27 October 2020
Images by @TheBoysTV on Facebook

We know superheroes as vigilantes that make the world a better, safer place. But what if that idealistic fantasy was tossed away for something more realistic? What if superheroes were implemented into the real world, like celebrities? What if they were like celebrities hired by corrupt corporations that lobby government branches and prioritise the selling of merchandise and cinema tickets over saving actual lives? And looking at the general depravity of humanity,  how many superheroes would abuse their powers of superspeed or laser vision? The Boys is a modern Watchmen.

This series offers everything that Marvel’s family-friendly over-commercialised hive mind cannot. The Boys twists and strangles all notions and tropes we have of superheroes. While their PR teams peddle them as righteous saviours, behind the scenes superheroes are really sexually assaulting fans, reviving Nazi agendas, slaughtering whales, murdering bystanders, destroying airplanes, committing war crimes, and so forth. In this universe, ‘superhero’ is not an aspirational title to earn, it is a product marketed to the masses. The Boys is compellingly grey, has a level of satire that out-Deadpools Deadpool and a perennial sense of danger, like Game of Thrones. Though it is unable to match the near-perfection of season one, season two still triumphs!

Although almost every review of The Boys tends to over-focus on Anthony Starr as Homelander, I too must write a tribute to his utterly amazing performance. His acting is seriously as good as everyone says it is. Everyone in the cast is talented, and not even the smallest of characters have any weak moments – however, nobody comes as close to embodying their character as Starr. One might say Starr is the series’ star. In simple terms, Homelander is an evil superman executed to perfection. This is a deranged, egotistical superman raised as a lab rat to become the almighty saviour, which is perfect since he requires the world’s admiration to prevent him going off the deep end and massacring everything. Even when he is ‘under control’ Starr’s Homelander is a sheer, unrelenting force disguised as a star-spangled patriot. Starr pours out everything in every single scene he is in to unfold another layer of depravity the viewer had in no way anticipating, never allowing the viewer a second of solace from Homelander’s maniacal intentions and omnipotence.

Ultimately, the crux of why Homelander is so compelling is that Starr adds a layer of humanity that the original comics do not do (at least, not to the same extent). It is this uncanny juxtaposition between Homelander’s unmatched physical superiority and utmost fragile psyche that means his mere presence incites unpredictable terror. Starr’s portrayal elevates this character on par with the likes of Joker and Thanos! An endlessly curious detail has leaked for season three that Homelander will become an unhinged full-blown homicidal maniac, and I cannot wait to see where Anthony Starr as well as Eric Kripke, the showrunner, takes this character.

The Boys made its debut splash with brilliant subversions of the delusional neatness of mainstream superheroes. It cleverly relied on these conventions to diabolically upend them, but now that we are set in its own conventions, perhaps its charm is starting to wear off? As for myself, not quite yet. Its relevant, poignant commentary of contemporary politics and its own genre will last a bit longer, but not forever. I love how much this show, without batting an eye, mocks Hollywood’s response to #MeToo and other progressive movements. Its ‘girl power’ moment is genuine and a hilarious, satirical call back to the feminist moment in Avengers: Endgame. The Boys really does not shy away from making any current figures into targets. I especially liked that in the background government killings, The Boys includes the likes of Jeffrey Epstein. While relying on snarky quips and did work for the first season, some episodes of the second season just felt bloated and dry because there was not much other than the angsty comments it has repeated already. Still, the second season finishes strong with an incredible finale that feels like a proper send-off with some much-needed catharsis.

I am concerned over whether The Boys is cornering itself with its worldbuilding containing the likes of new institutions, new superheroes and so on. In terms of narrative, specifically, the second season excessively relies on the use of blackmail or sabotage. Of course, in a realistic setting, this would be the predominant way of combatting such large-scale enemies, nonetheless, it does not diminish the sense of déjà vu. There were certainly times where blackmail was set up and paid off magnificently well, but the level of creative and diverse problem-solving in the second season does not compare to the first. Also, it is strange that this show satirises its own genre because by doing so it adheres to its own sub-genre. With the likes of Legends of Tomorrow and The Umbrella Academy, The Boys too is another oddball superhero team up with more mentally scarred characters and gory violence than in a Marvel or DC movie. The one thing that The Boys does in making itself distinct in its sub-genre is having the character of Homelander, of course, along with its sheer level of gore.

Before I make my point let me preface with Kripke’s talent as the show’s main writer and producer. That being said, there is no scooting around his polarising and provocative writing. In one interview, the cast displayed clear discomfort as he discussed his creative ideas. These included his obsession with dolphin orgasms and super-powered jerking off. His unconventional ideas, let us say, are a key contributing factor to The Boys stark, satirical darkness, and thus part of its success. On the contrary, it may one day be its downfall. A similar motif is shared among several character developments in The Boys – that is, people retaining their morality or treading past the line. I sense that the series might slip into full insanity. As long as the other production members keep Kripke restrained to the correct extent, especially his notions of sex, then I have faith in the future success of this franchise.

Still far above average television, season two was destined to underperform the greatness of the original season. Had the season two script been polished once or a couple times more, then, I think, it could have fulfilled its true potential. On the other hand, The Boys still stays true to itself and it would be a big mistake to miss out on this thrilling series deserving of its growing hype and loyal fanbase. Where the world is premised on order, The Boys explores how such premises actually breed chaos. Both absent and full of hope in its grounded absurdity, The Boys’ second season, with a few bumps, looks like the moment before an arrow is launched.