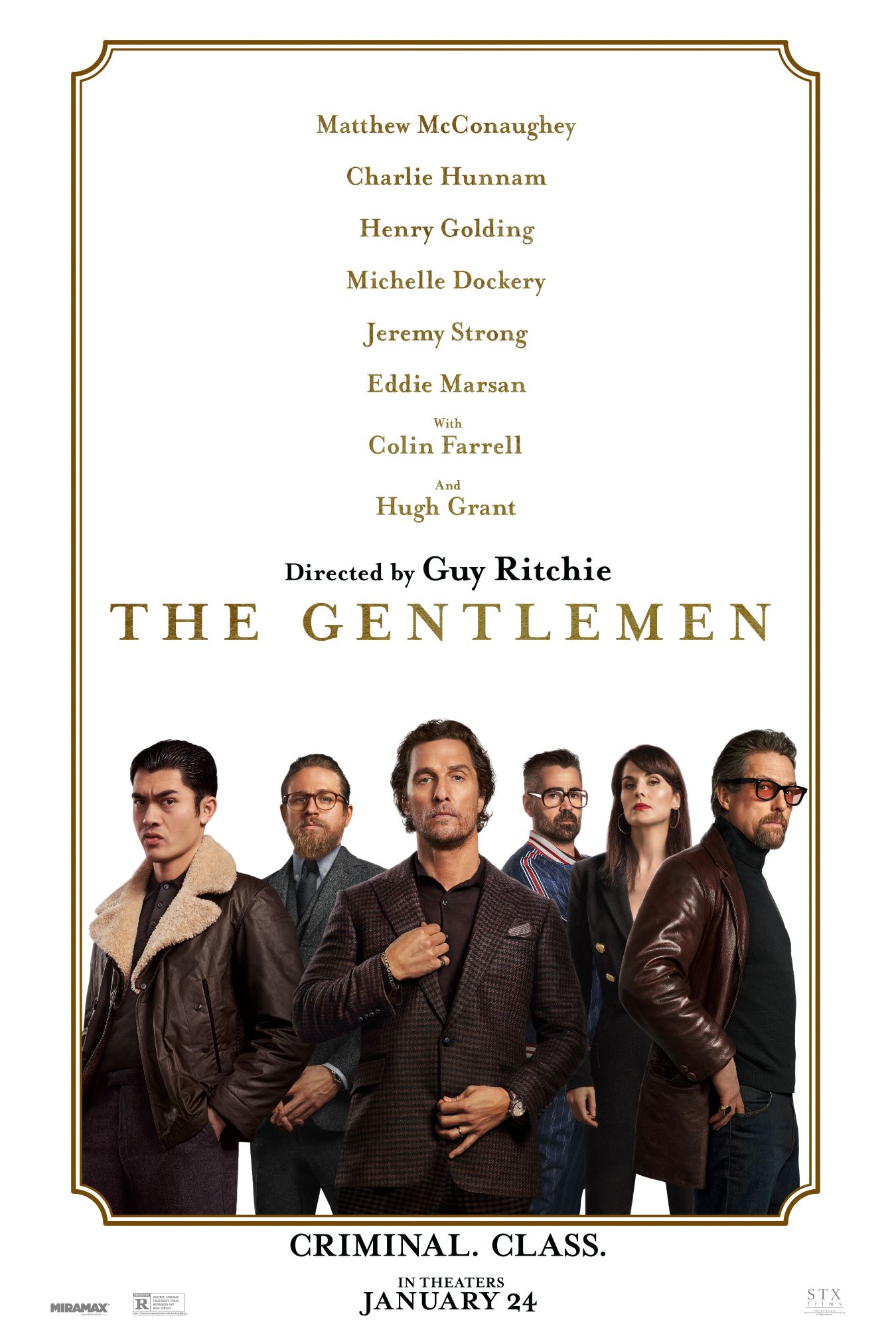 Ellie Burridge
I've watched Iron Man 3 thirteen times, so take all of my reviews with a pinch of that.
Published at 12:30 on 19 January 2020
Images by Christopher Raphael/STX Films

For a number of years now, it’s been unclear what kind of film Guy Ritchie actually wants to make. After smashing his way into the British gangster genre back in 1998 with Lock, Stock and Two Smoking Barrels and following up two years later with Snatch, Ritchie has done a lot of work to diversify his portfolio—or, if the overarching theme of The Gentlemen can be applied: gentrify it.

This is not to say that Ritchie’s post-Snatch films have been a series of misfires. 2009’s Sherlock Holmes and its 2011 follow-up both brought outrageous, kinetic fun to the mythos of Arthur Conan Doyle’s creation, and The Man from U.N.C.L.E. has a well-deserved cult following, desperate for a sequel. There’s even a wink to that film’s fans at the end of The Gentlemen, albeit a confusing one: Hugh Grant, who was in The Man from U.N.C.L.E., sits in front of a poster for it and discusses sequels.

But regardless of quality, Ritchie seems to have dedicated himself, increasingly, to courting the mainstream. He’s not proved to be very good at it. With the exception of last year’s remake of Aladdin, which was always going rake in box office dollars for the Mouse, Ritchie’s big-budget record is spotty at best. The Man from U.N.C.L.E. (2015), a flop, was followed by King Arthur: Legend of the Sword (2017), an even bigger flop. So perhaps it was high time for Ritchie to return to his roots. Or wash the Disney money off his hands. Whichever. The result is The Gentlemen, a hyperactive gangster flick with more C-bombs than you can count alongside an extraordinary amount of star power in the constellation of McConaughey, Grant, and Farrell.

There isn’t a protagonist, per se. The narrative is being told by lecherous, gay PI Fletcher (Hugh Grant, who made a resolution in 2017 and now only plays lecherous, gay characters, which it turns out is what he’s best at) and he identifies marijuana kingpin Mickey Pearson (Matthew McConaughey) as his protagonist, but the figure who ties the framing device to the action is Raymond (Charlie Hunnam), Pearson’s right-hand man. Fletcher is trying to extort Raymond to the tune of £20 million as well as sleep with him, and his private investigation ties a lot of pieces into one conspiracy. Among the key players are Matthew (Jeremy Strong), who’s trying to buy out Pearson’s business; Dry Eye (Henry Golding), who’s trying to do the same thing but nastier; Ros (Michelle Dockery), Pearson’s tough-as-nails wife; and Coach (Colin Farrell), whose role in proceedings is complicated but delicious (he’s easily the most fun character).

The dialogue rings with traces of Martin McDonagh’s early stuff, which means that Colin Farrell is the best at delivering it, and it’s very funny if you like lots of swearing combined with a complicated dance along the lines of what’s appropriate. The digs at Britain’s class system are sharp and consistently hilarious; the many, many jokes at the expense of Golding’s race are wearisome. Ritchie’s screenplay is in love with exchanges that are either homoerotic or homophobic (which has been a trend throughout his entire career) and the interactions between Grant and Hunnam might have benefitted from more reciprocity—Grant hitting on Hunnam is all well and good, but Hunnam flirting right back (as a powerplay or a joke, even) might have made their dynamic more interesting. That said, Grant is clearly having the time of his life playing against type as a Cockney media louse.

If you’re the kind of person who finds Ritchie’s flashy directorial style — freeze-frames, slow motion, captions and the like — frustrating, steer clear. Every shot, every camera movement, every gimmick (including a very funny scene with Grant and Hunnam delivering Strong and Golding’s dialogue) is delivered with the impression of a wink and a nudge. Ritchie’s style is always heavy-handed, and it has always been divisive. Undoubtedly, The Gentlemen is narratively tricky because that looks clever, and visually flashy because that’s noticeably impressive. It either works for you or it doesn’t: for me, it worked.

It’s always fun to watch people being crass and violent and witty, and The Gentlemen delivers in spades. Guy Ritchie’s return to the gangster genre has an almost comforting familiarity to it and all of the performers are at the top of their game. It’s not the most intellectually stimulating crime caper you’ll see this year, but it might be the most fun.

The Gentlemen is in cinemas now.