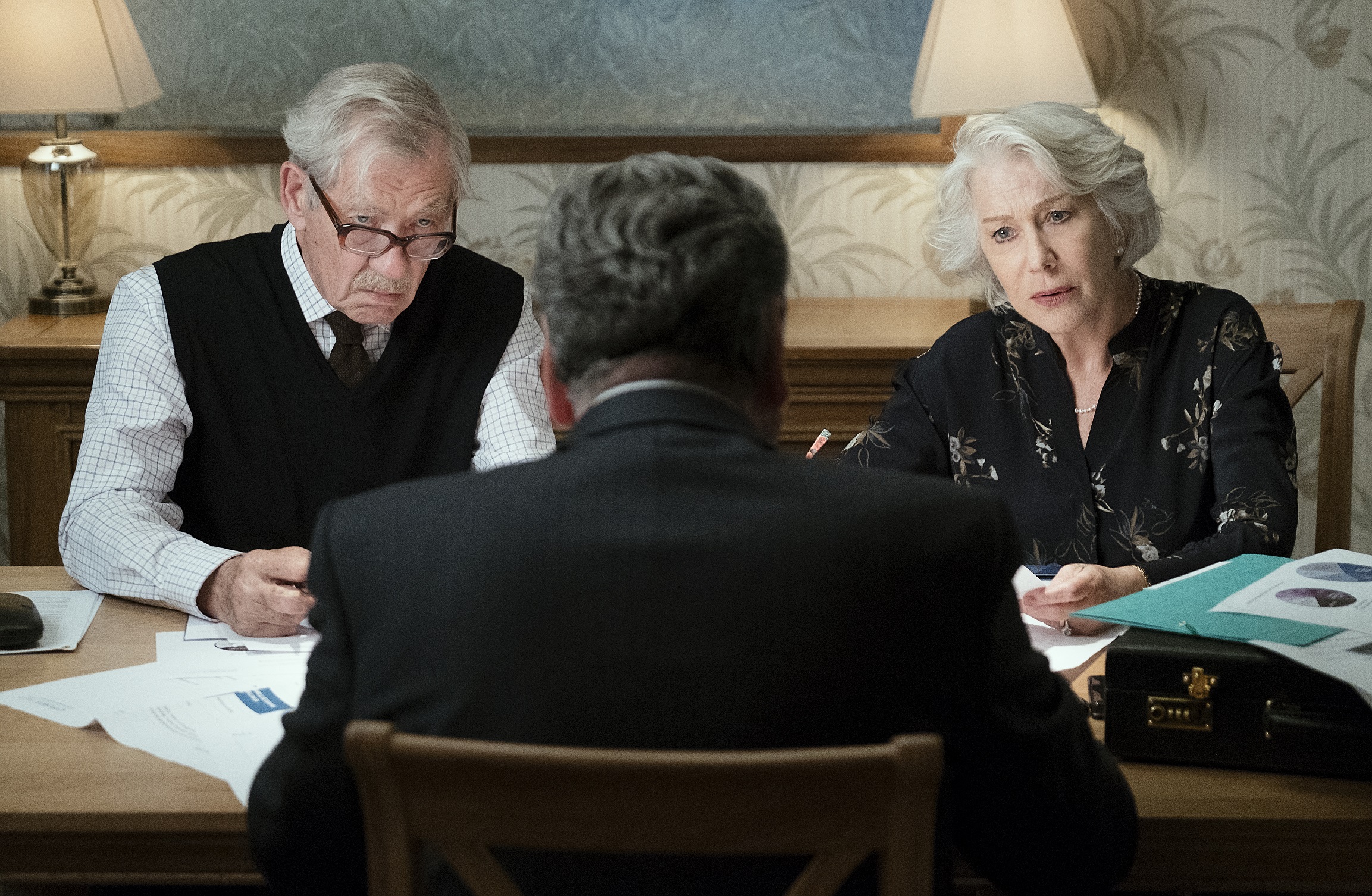 Film Critic Harry Taylor is impressed by McKellen and Mirren at the top of their games, yet is puzzled by the knotty script, and is lost in the plot’s twisting and turning labyrinth

‘I’ve just come here for a chat and a drink’, proclaimed Ian McKellen on The Graham Norton Show during The Good Liar’s first week of promotion – a typically classy answer from the endlessly charming veteran. And Bill Condon’s adaptation of Nicholas Searle’s 2016 novel would certainly like you to think it’s a film with an air of elegance, a film which, alongside its other well-loved lead Helen Mirren, aims to go back-to-basics and provide a refined, modern take on the classic thriller formula in an age of extended universes and franchise reboots.

Mirren plays Betty, a widow whose search for companionship in later life brings her into contact with Roy Courtnay (Ian McKellen) on an online dating site. The two hit it off, and after several dates, Betty, the self-proclaimed ‘eternal optimist’ invites Roy to live with her in single-storey suburbia. But little does she know, her new lodger has intentions beyond intimacy; a career conman who scams people out of their money in a series of fraudulent investment schemes, Roy has now set his sights on Betty and her late husband’s savings account, and as the two grow closer, sceptical grandson Steven (Russell Tovey) grows increasingly suspicious. Yet as the two elders become more intimate and as Roy develops genuine feelings for Betty, he finds himself navigating uncharted waters between affection and contempt, between romantic charm and criminal deception, between truth and lie.

The film establishes its central tension between fact and fiction right from the outset, as Betty and Roy fill out their dating profiles using pseudonyms; embellishing and exaggerating the online portraits of themselves with half-true details. And as the pair’s first messages are interspersed with the film’s credits, punched onto paper by a typewriter, The Good Liar hints toward an unresolved tension between past and present, a seed of suspense that perhaps led Helen Mirren, in her interview with BBC Radio 5’s Simon Mayo, to claim that the film possesses ‘Hitchcockian overtones’.

But despite a solid premise and two headline leads, The Good Liar squanders its potential amongst a catalogue of preposterous twists and clunky dialogue, all tangled up in a disastrously contrived, expository script.

The film’s ultimate failure is made all the more unfortunate because its first act shows glimmers of real promise, especially from McKellen, whose character we follow the closest. Switching from fuzzy grandpa to stone-cold criminal with disturbing, darkly charming nonchalance, the momentary lapses in his hard-man outer shell give rise to some genuinely nuanced acting, either in a slight glint in the eye or twitch of the lip.

But the film’s script proceeds to drag its bumbling feet over any subtlety the cast try to maintain – as Betty is picked up after their first date, Roy looks on menacingly, muttering under his breath, Scooby-Doo-villain-style. Clumsy, clichéd motifs and awkward exchanges haunt the writing, complete with tone-deaf, wince-worthy ‘kids these days’ dialogue, whilst towards the back-end, characters explain motivations and major plot points in comically expository monologues. Not entirely satisfied with stripping The Good Liar of the finesse it so clearly aspires toward, the film’s script also insists on some bizarrely obscene outbursts from Roy; never before has McKellen been so gratuitously (and unnecessarily) potty-mouthed.

And whilst some of the film’s early sequences simmer with ambiguity, where mini-twists and guileful word games hint towards a film always pulling the rug from beneath its characters and audience, the plot quickly boils over into the absurd, and in its irrepressible desire to out-twist itself, The Good Liar ends up on a winding path of far-fetched and laughably contrived reveals set against the backdrop of a baffling historical melodrama. McKellen has described The Good Liar as a ‘puzzle film’, implying that the movie might scatter subtle clues throughout for attentive viewers to speculatively, satisfyingly piece together – it doesn’t. Whilst the plot’s central twist becomes increasingly apparent over the course of the film, its other main reveals come totally out of left field; unsatisfying and forced, the film’s scant emotional believability flatlines as the script once again rears its awkward, ungainly head in a final, film-finishing blow.

It’s as if the writers lost the last third of the script and tacked on the final act of an entirely different screenplay they found lying about the office thinking ‘yeah, that’ll do’. And the film ultimately flounders in its absurdity, ending on a deflated, hollow note that feels unearned, out of the blue and tasteless.

All this to say that The Good Liar probably won’t bore you; but it will leave you feeling very short-changed. Mirren’s acting is serviceable for the most part; she plays the role of a naïve, hopeful widow well enough, but discussing her efforts after the first few acts takes us into spoiler territory. It is no spoiler to say, however, that her performance does little to elevate the trudging script.

An increasingly preposterous, clumsy exercise in anti-climax, The Good Liar proves to be far too twisty for its own good. Far from the classy, elegant thriller promised by the trailer, it squanders real potential and, despite charming first impressions, ultimately cons its audience.

The Good Liar is currently in cinemas.