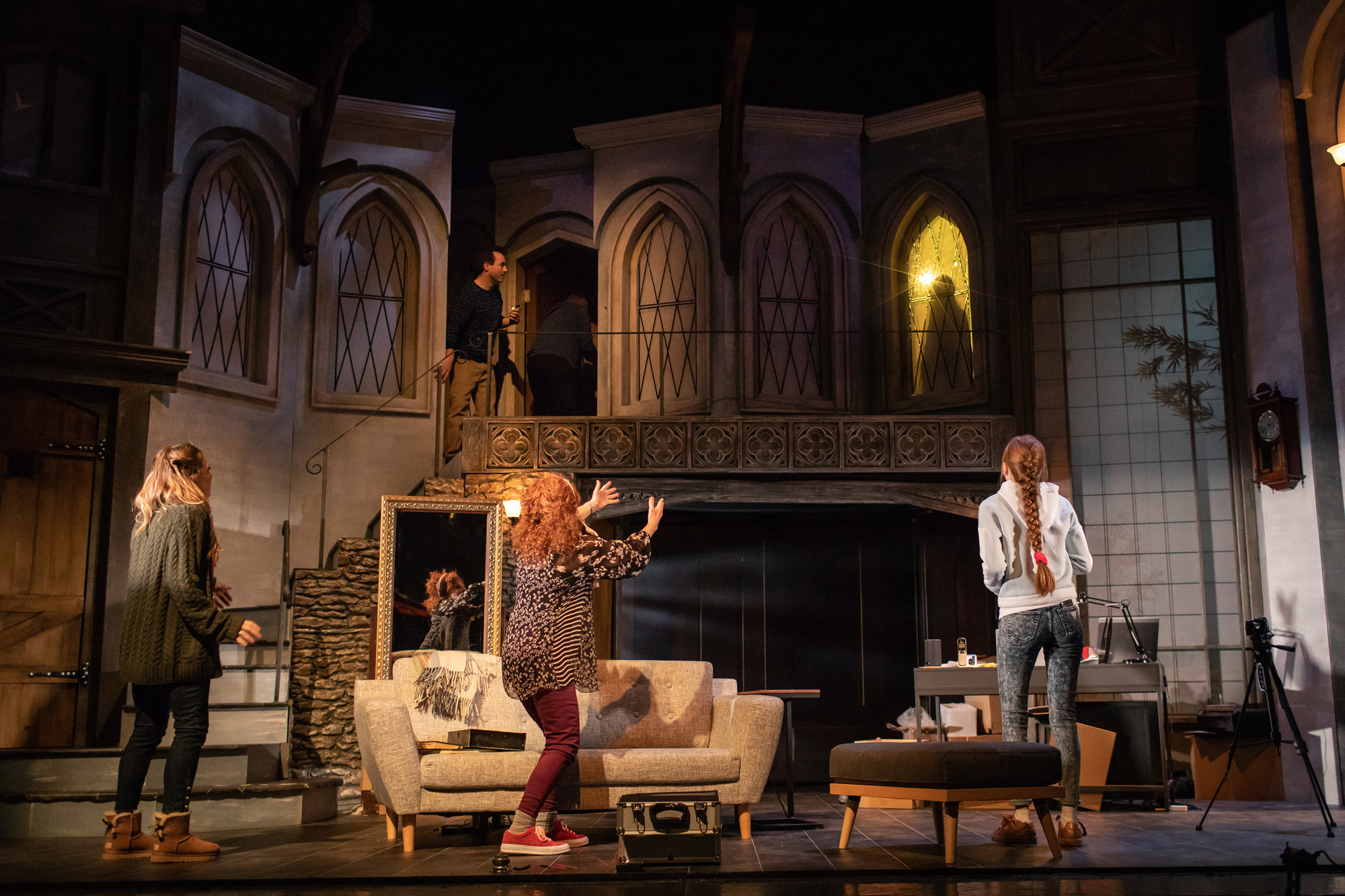 Review: The House on Cold Hill

Frankie Rhodes
I am an English student and aspiring journalist from Essex, with a love for all things arty and musical.
Published at 09:00 on 23 February 2019
Images by Helen Maybanks

As a particularly squeamish person, reviewing a production about ghosts was something that I certainly had reservations about. When the curtains of Coventry’s Belgrade Theatre opened to a pitch-black scene, I was ready to spend the next couple of hours or so hiding behind my notebook. However, ‘The House on Cold Hill’ was a production that managed to be chilling without relying on endless over-the-top jump scares, and was generally an impressive modern take on the classic ghost tale.

Adapted from a novel by best-selling author Peter James, and inspired by true events, the play focuses on a family moving in to a decrepit Georgian mansion in the Sussex countryside. Whilst parents Ollie and Caro are excited about their new-start, their technology-addicted teenage daughter Jade is disappointed to have moved away from her friends. Screeching water pipes and a dodgy internet connection appear to be the only unusual quirks about their new home, until inexplicable things start to happen, and the family can no longer ignore the local rumours about the sinister history of the house.

The production employed all of the usual ghost-story-stereotypes: old, shadowy mansion, naïve newcomers, a middle-aged hippie with the ability to communicate with ghosts, slamming doors and the like. Yet, it was also able to incorporate modern day technology into the plotline in a way that I had rarely seen achieved before (or at least not beyond the realm of Netflix dystopian films.) The family’s new gadget, an Amazon echo, became an important part of the descent into horror, and elements of FaceTime were brought in via teenager Jade. This cleverly demonstrated a 21st Century response to the horror genre, however at times it could have been executed in a more convincing way. Persephone Swales-Dawson’s performance as Jade, for example, displayed high levels of energy, but sometimes failed to capture the essence of the moody-teenager constantly glued to her phone. It felt at times as if this was a storyline aiming to appeal to the youth yet quite obviously having been written by the older generation, meaning that it lost an element of its “up-to-date-ness”.

Having said that, one thing that the cast were able to expertly capture was the sense of a family unit. Rita Simmons (who is most famous for her role as Roxy Mitchell in EastEnders) brought with her that cockney sense of family loyalty in her role as Caro, whilst Joe McFadden as Ollie was able to embody the chirpy, lovable yet slightly hopeless man of the household. With Persephone adding to this dynamic as the reluctantly devoted daughter, it was easy to forget that you were watching renowned Soap Stars, as for the duration of the play, you felt as if you were watching a real family. This added important weight to the storyline, as you really cared about the characters, and were constantly rooting for them to triumph over their ghostly perils.

Yet, the family appeal of the production did not take away from its spookiness, and whilst the play was far from an X-rated horror, it was able to effectively induce tension and fear. As the jump-scares were not as innumerable as they often are in horror films, they appeared out of nowhere, and struck when you least expected it, making them incredibly powerful. The production was able to generate a general atmosphere of eeriness, with subtle ghostly projections, whispers and sinister knocking being among the chilling effects. Beyond this, the layout of the stage was such that you could only see a small part of the indicatively huge mansion, so that characters emerged from dark corners that you didn’t even know existed. A gauze panel towards the right of the stage was illuminated on several occasions to indicate someone (or something) outside, trying to get in, which for me was one of the most harrowing effects.

Despite this, the production was able to deliver several comical moments without taking away from its frightening elements. A sudden ghostly apparition, followed a few seconds later by an exclamation of ‘Jesus!’ or ‘what the hell!’ from Joe McFadden, left the audience stunned one moment and bursting out in laughter the next. Supporting characters such as Annie the quirky medium (portrayed by Tricia Deighton) and Fortinbras the local Parish Priest (portrayed by Padraig Lynch) provided much material for laughs. However, one supporting character whose story was left unresolved was Charlie Clements’, who took on the role of Chris the geeky technician. Whether left open for the purposes of a sequel, or carelessly forgotten, his plot line remained disappointingly unsettled. Still, perhaps a general feeling of unsettledness is inevitable after witnessing a production involving ghosts.

It is undoubtedly difficult to take a cult genre and make it appeal to a mainstream theatre audience (or several audiences across the country, as this production is set to tour.) Yet, ‘The House on Cold Hill’ has succeeded in being entertaining, convincing, and of course frightening, with attempts made to adapt to the interests of modern viewers.