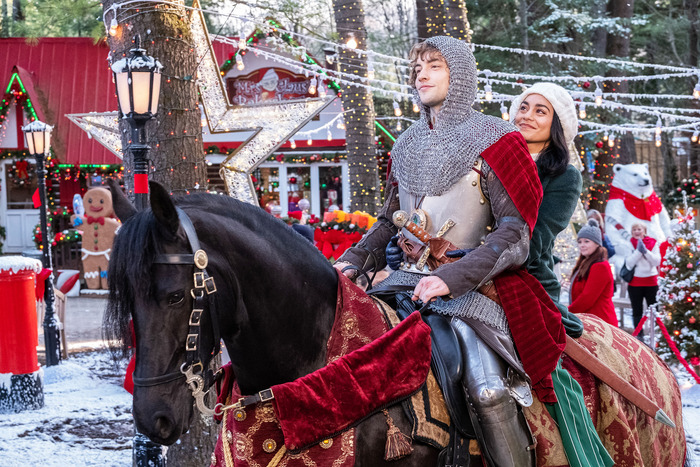 Ellie Burridge
I've watched Iron Man 3 thirteen times, so take all of my reviews with a pinch of that.
Published at 13:30 on 10 December 2019
Images by Netflix

There are very few filmmakers who could make a premise as ridiculous as The Knight Before Christmas’s work: a fourteenth-century English knight is magically transported to modern day Ohio, where he falls in love with the richest high school teacher in the world (Vanessa Hudgens). It seems fair to assume that the entire film was reverse engineered from the title and its ‘clever’ pun, but even with allowances made, director Monika Mitchell and writer Cara J. Russell seem content to have made a movie without so much as a hint of ingenuity or passion.

And yet – is there perhaps a hint of self-awareness in Russell’s script? After all, the dreamboat knight (who looks more like a lacrosse player than a man out of time) is named Sir Cole: pronounced ‘circle.’ It’s either a knowing joke or a result of no one saying the name out loud until it was already too late, and either seems possible from the screenwriter of such films as Heavenly Match and Groomzilla. Much of the humour that can be found in the film treads a similar line: is Cole’s old-timey misogyny (he adores the term ‘old crone’ and refers to a waiter as a ‘wench’) meant to be as funny as it is? Does Vanessa Hudgens’ character – Brooke – have four-thousand Christmas wreathes placed around her house to make us laugh? What about the fact that the out-of-touch murder-happy knight from the 1300s decides he wants to become a cop – and is encouraged to do so by the town’s police chief? Is that an intentional parody of America’s attitude towards law enforcement – the would-be-cop-knight threatens to cut off a thief’s hand in a joke that shows remarkably poor taste – or just the result of a complacent screenwriter not thinking very hard about the implications?

This is a movie in which an Amazon Echo is a prominent plot device; a Netflix film wherein the characters binge-watch Netflix. It presents a world where commodities and money are paramount to Christmas spirit and life in general. Brooke’s wealth is so ostentatious (and so at odds with the audience’s knowledge of a teacher’s salary) that the film is obligated to explain and excuse it: she can live in a huge home with a separate guest-house and drive an expensive car and spend tens of thousands of dollars on Christmas decorations because her parents left those things to her. It’s impossible to begrudge Brooke and her family this privilege, because they’re just so nice about it. There’s a mildly nauseating plotline about Brooke’s niece giving her gloves to a girl who can’t afford any, for which the niece (who, for sure, did a nice thing) is treated by the other characters like she has single-handedly ended poverty.

I could spend hours questioning every aspect of The Knight Before Christmas, which is very nearly the worst version of itself imaginable. Watching it is like swimming through a toxic sludge of all the Christmas movie tropes that do the genre a disservice. Plus, a reference to the fictional country of ‘Aldovia’ confirms that The Knight Before Christmas is set in the same world as the Christmas Prince franchise. This is almost too much to bear, because it holds within it the tragic certainty that we’ll end up with an ‘Awful Netflix Christmas Movies Cinematic Universe’ and someone will have to ask Martin Scorsese whether he thinks it’s cinema or not. And we will have brought it upon ourselves.

The Knight Before Christmas is a vapid, insulting, saccharine indictment of our culture’s attitude towards Christmas, but it’s also occasionally very funny. If you’re the kind of person who’ll laugh every time someone calls a grown man ‘circle,’ it might be worth a watch. If hollow consumerism makes you despair for the state of the world, avoid it like the plague that Sir Cole may well have brought with him to modern-day America.

The Knight Before Christmas is now streaming on Netflix.