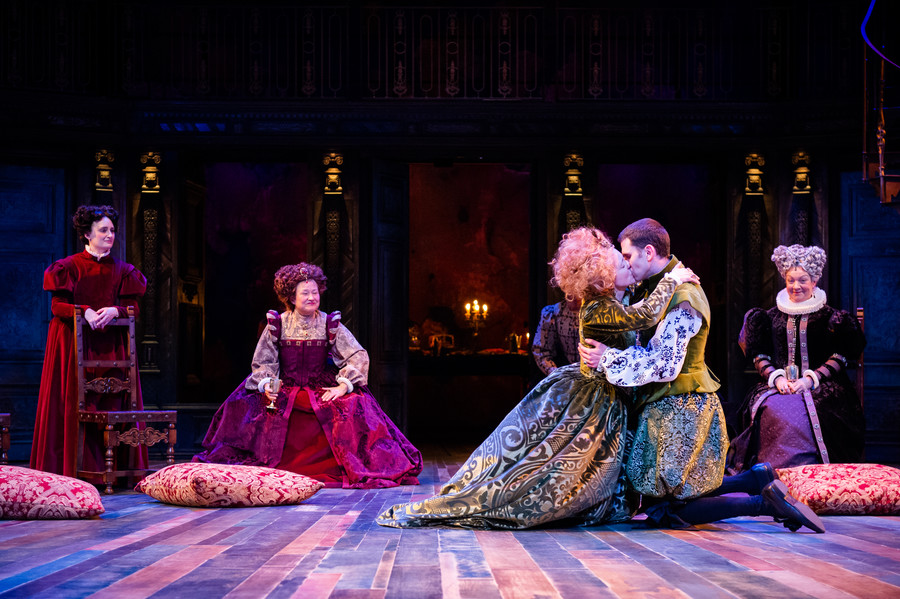 Review: The Taming of the Shrew, RSC

In a world of Beyoncé, women’s marches and spreading repulsion against all things sneakily misogynistic, we are becoming far more alert to gendered insults. ‘Bossy’, ‘shrill’, ‘hysterical’ and ‘bitchy’, these words are double-edged swords which brand women as over-bearing or over-emotional and lay the blame with their sex. The Taming of the Shrew, which Shakespeare first penned between 1590 and 1592, explores the mother of all such insults: shrew. According to our good friend Google, this ancestor of ‘bossy’ means ‘a bad tempered or aggressively assertive woman’. Not so in the RSC’s current performance of this controversial comedy, where Katherine, the titular shrew, is a violent young man. Katherine, played by Joseph Arkley, rejects the notion that a man must be demure and bat his lashes while waiting for a dame in shining armour to come along to rescue the damoiseau (yes, that is the male version of damsel, who knew) in distress.

I laughed over and over at this bold, energetic performance, but I left feeling unsettled and uncomfortable. If you have ever read or seen the play in its original format, I imagine you understand why. The play functions as a how-to guide to taming an unruly (read: independent) wife into complete submission to her husband. The remedy for such a wife is, apparently, to change her name, deprive her of food and sleep and to tell her that she must agree unquestioningly with whatever her husband says, including agreeing that it is night when she can clearly see the sun shining. As the play progresses, Katherine’s independent spirit is washed away by this treatment. In her final speech to the other wives of the play she is profoundly changed, stating that a woman must be obedient to her husband, who is ‘thy lord, thy king, thy governor’.

Setting aside my reservations about the play itself, this was simply an excellent night out at the theatre. I have never before seen a Shakespeare play performed in Elizabethan costume and Hannah Clark’s bold and eccentric creations were the perfect reflection of a classic play made fresh. Wigs were piled high on the women’s heads, while the coquettish Bianco (brother to Katherine) flicked his glossy long hair over his shoulder with every exit from the stage, playing the role of a young flirt with fantastic energy and comic timing. Composer Ruth Chan’s rich score incorporated the work of the female Renaissance Italian composer Maddalena Casulana and kept the comic energy high, with flourishes announcing the most pretentious characters’ entrances and accompanying the cast in lively song and dance numbers in Italian.

Of all the actors on stage, Sophie Stanton, as an impotent and haughty Gremia (suitor to Bianco) earned the greatest cheers of laughter from the audience. I don’t know how she did it, but she glided across the stage as though on skates, in a deft move that mocked the hauteur of Elizabethan courting rituals. Claire Price was an erratic, eccentric Petruchia, whose wig unravelled progressively as her efforts to tame the shrew continued apace. But it was Arkley’s performance of Katherine which left the greatest impression. After his wedding, he was bound and dragged off stage by Petruchia, who claimed him now as her property, to be treated as she pleased. The image of a man bound on stage is perhaps not as provocative as that of a woman, but the breaking of Katherine’s spirit was performed subtly and cuttingly. Over the course of the ‘taming’, Katherine’s stature was physically reduced from standing proud and tall, to bent and broken. Cleverly, Katherine went from being dressed in wedding clothes and exaggerated Elizabethan makeup to being barefoot in an undershirt, with the harsh whites and pinks of his makeup smudged across his face as his spirit was broken.

This was a challenging performance. By placing women in power, director Justin Audibert asked the audience to consider exactly how much comedy can be found in a play predicated upon the forced submission of one person to another. The answer was plenty, if we didn’t look too closely at Katherine’s weary, resigned face. Inverting historical norms like this provides some excellent and diverse roles for women in theatre and sharpens the innuendo which drips from this script. But there is no avoiding the historical reality from which it emerges, a fact which leaves a sour taste in a laughing mouth.

The Taming of the Shrew continues at the Royal Shakespeare Theatre until 31st August 2019.